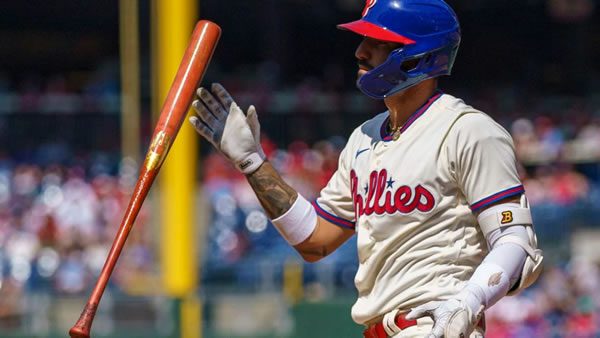 The Philadelphia Phillies host the St. Louis Cardinals on Friday, July 1st at Citizens Bank Park. The first pitch in this matchup is scheduled for 06:05 ET. The MLB Odds Board places St. Louis as the favorite (-125), with an OU line set at 9.5.

The Cardinals are looking to continue adding wins, as they are 3-2 over their last 5 games. During this time, they have an average scoring differential of +11. Offensively, the team has put up 27 runs in their last 5 games. St. Louis’s season average comes in at 4.78 (7th. So far, St. Louis has won over half of their 24 series played, going 12-6-6.

In their last game, the Philadelphia Phillies picked up a 10 run win over the Braves by a score of 14-4. In the win, the pitching staff allowed just 4 runs on 9 hits. In the victory, the Phillies came up with 13 hits and 14 runs. Heading into action, Philadelphia was the favorite at -150.0. For the season, the team has been favored in 51 games, winning at a rate of 55%. In terms of the over-under, the Phillies and Braves combined to surpass the line of 8.5 runs. For the season, the team’s over-under record is 43-32-2.

St. Louis will roll with Miles Mikolas (5-5) as their starter. In his previous outings, Mikolas has lasted an average of 6.28 innings, putting together an ERA of just 2.57. Hits have been hard to come by against the right-hander, as his batting average allowed is just 0.207. In addition, to his strong BA allowed, he has been able to limit power, allowing just 0.76 home runs allowed per 9 innings. On the season, Miles Mikolas has had no problem racking up strikeouts, posting a strikeout percentage of 21.0%. This includes a per game average of 5.2 K’s per game. For the season, he has struggled with command averaging 1.81 walks per outing.

Philadelphia will roll with Bailey Falter (0-2) as their starter. So far, Falter has put together an ERA of 4.5. In his appearances leading up to today, he has lasted an average of 2.86 innings. Teams have been able to rack up runs against him, as he has a batting average allowed of 0.286. Opposing hitters are hitting home runs at an above average rate against Falter. This year, he is allowing 2.25 HRs per 9 innings pitched. In terms of strikeouts, Falter is averaging just 1.86 K’s per game. So far, he has struck out 15.0% of the batters he has faced. Leading into the game, he has shown a strong command of his pitches, averaging just 2.7 walks per contest.

Today’s game between the St. Louis Cardinals and Philadelphia Phillies is their first matchup of the year. Dating back to last season, Philadelphia picked up 4 wins compared to 3, taking the season series. The average scoring margin in these games was 3.0 with an over-under record of 2-4. Last year, the two teams combined to average 7.29 runs per game.

Heading into Friday’s National League matchup between St Louis and Philadelphia, the Cardinals are the favorite on the moneyline (-125). After going through a short rough patch in early June, Miles Mikolas has put together 3 straight quality starts. In these outings, the Cardinals went 2-1. On the other side, Bailey Falter is coming off his best outing of the season vs Washington. However, Falter has not shown the ability to work deep into games. Look for St. Louis to pick up the win.

Free MLB Pick: Cardinals Moneyline. Bet your Phillies vs. Cardinals pick and ALL your baseball bets for free this week by scoring a huge 100% real cash bonus on your first deposit of $100 to $500 when you use bonus code PREDICTEM at Betnow Sportsbook!