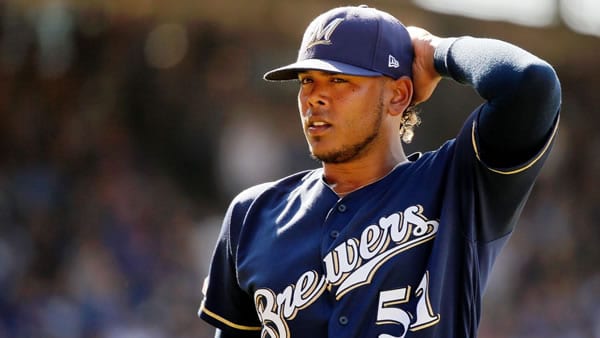 Whoever designed this schedule could not have been thinking, because the Cubs are really behind the eight-ball going into this matchup. Not only did Chicago play the last game of the day on Sunday, but the Cubs also played at Dodger Stadium in the Pacific Time Zone and had to cross two time zones before arriving in Wisconsin early Monday morning.

Meanwhile, the Brewers played early and played at home, giving them a normal day while their opponents were still traveling. In the NBA, this is commonly referred to as a schedule loss, and while the term isn’t common in MLB, the Cubs might be looking at one of those here. Schedule losses aren’t usually a thing in MLB because most teams are playing every day, and when teams do have to cross time zones, they’re usually given a day off in order to travel. But the Cubs are stuck, and not only are they stuck, but they’re in the process of flying east, losing two hours in the process.

Actually, those were the 1906 White Sox who earned that nickname, but the Brewers are starting to apply it to themselves with how they haven’t been hitting this season. Milwaukee has slipped to last in the majors in batting average at .215, but the Brewers come into this game riding a winning streak that has reached seven wins in eight games.
So what’s going on here? The Brewers are getting excellent pitching, for one, and for another, it’s helped that they’ve played what might be the worst schedule in baseball over the past week: Colorado at home and Arizona anywhere (that series was in Phoenix). Those two bumbling opponents have proven so weak that teams really don’t need to score a lot to beat them, which is part of what’s allowed the Brewers to get away with this.
It also hasn’t hurt that Milwaukee has been getting some strong performance out of Peralta as of late, as the Brewers have won seven of his past nine starts and is coming off a 10-strikeout performance. However, the record does come with one caveat: both losses cam in Milwaukee, where the Brewers are just 2-2 in his past four starts.

Kyle Hendricks is on an eight-start winning streak, in large part because he’s been steady without being overpowering. Through this stretch, the Cubs have given him enough run support to make the lead stand up and then he’s done just enough to handle his end of the bargain. Hendricks has given up three runs in half of those starts, but that’s only happened in situations where the Cubs were in a comfortable spot and could afford a mistake or two.
Over the past six weeks, Hendricks has only topped five strikeouts on two occasions, but he’s getting results by trusting his fielders to do the job behind him and get him enough runs when they get to the plate. So far, this more traditional equation is coming out to the right numbers for the Cubs.
Betting Trends

The roof should stay open on a 72 degree evening in southern Wisconsin, with a slight breeze of four miles per hour coming east-southeast and coming in from center field.

It’s hard to pick against Hendricks, given that he’s won his past eight starts, but diving deeper into his numbers says that he’s more reliant on his team than his stuff, and his team really isn’t playing its best baseball right now. With the Cubs having to cross two time zones just to get to this game and not playing all that well anyway, it’s really hard to trust them in this game.
I don’t love Milwaukee’s preparation for this series of beating up on the Diamondbacks and Rockies, but they can’t help their schedule. Give me the Brewers here. Where do you bet on games? Does your book offer a rebate on EVERY SINGLE BET whether it wins or loses? Does your credit card work there? Do they offer same day withdrawls? Is there live betting platform the best on the web? The likely answer is NO. Check out Bovada Sportsbook to start enjoying a better experience!