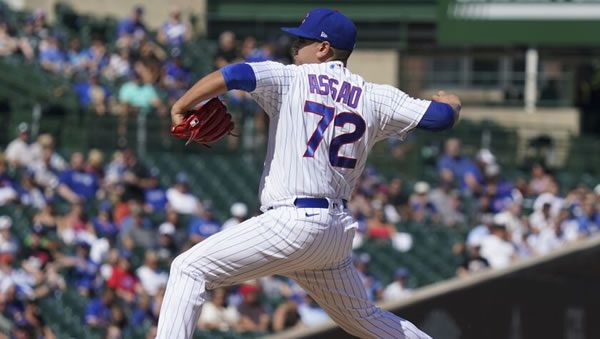 The Cincinnati Reds host the Chicago Cubs on Tuesday October 4th at Great American Ball Park. The first pitch in this matchup is scheduled for 06:40 ET. The MLB Odds Board places Cincinnati as the favorite (-115), with an OU line set at 8.0.

In Chicago’s last game, they fell to Cincinnati by a score of 3-1. In the losing effort, the pitching staff still held Cincinnati to just 3 runs on 6 hits. The Cubs ended the game with just 1 run on 2 hits. The loss came as Chicago was the betting underdog, getting 105.0 on the moneyline. This matchup remained below the over-under line set at 7.5 runs. With this result, Chicago’s over-under record dropped even further, moving to just 65-82-13.

Cincinnati is coming off a 2-run win over the Cubs (3-1). In the winning effort, the team’s pitchers held the Cubs to 1 run and 2 hits. The Reds offense ended the game with just 3 runs on 6 hits. Cincinnati picked up the win while being favored at -125.0. So far, the team has won 38.0% of the games in which they were favored. With this result, the Reds and Cubs combined to fall below the over-under line of 7.5 runs. This result comes as no surprise, as the team’s over-under record is just 75-80-5.

Javier Assad gets the start for the Cubs, with an overall record of 2-2. To date, Assad has an ERA of 3.62 while lasting an average of 4.01 innings per appearance. So far, Assad has a batting average allowed of 0.244. This season, Assad has been able to avoid giving up home runs, allowing just 1.12 per 9 innings. Assad is in the bottom half of the league in strikeouts, averaging just 3.25 K’s per game. This includes a strikeout percentage of 18.0%. Command has been a problem for Assad, as he is giving up 5.29 walks per outing.

Luis Cessa gets the start for the Reds, with an overall record of 4-4. Cessa gets the start with an ERA of 4.76. On average, he has lasted 1.67 innings per appearance. Compared to other starters, the right-hander has a high BA allowed of 0.261. Opposing batters have been able to drive the ball with power against Cessa, averaging 1.56 homers per 9 innings pitched. Cessa has accumulated a strikeout percentage of 17.0% and a per-game average of 1.22. For the season, he has struggled with command averaging 3.21 walks per outing.

Today’s matchup between the Chicago Cubs and Cincinnati Reds will be their 18th meeting of the season. So far, Chicago is leading the season series, 10-7. The over-under record in this series sits at 8-6. The average run total in these games is 8.84 runs per game. In these matchups, the average scoring differential sits at 4.65 runs. Dating back to last season, Cincinnati picked up 11 wins compared to 8, taking the season series. The over-under record in last year’s matchups was 7-11, with the average run total being 8.84 runs per game. The average scoring differential in this series was 2.84 runs per game.

More Picks: Rockies vs. Dodgers recommeneded bet for their 10/4/22 game.

Leading into Tuesday’s NL Central matchup between Chicago and Cincinnati, the oddsmakers are giving a slight edge to the Reds on the moneyline. However, I recommend continuing to roll with the Cubs, who are finishing up the season on an impressive hot streak. In addition, Chicago has picked up 2 straight wins with Javier Assad on the mound.