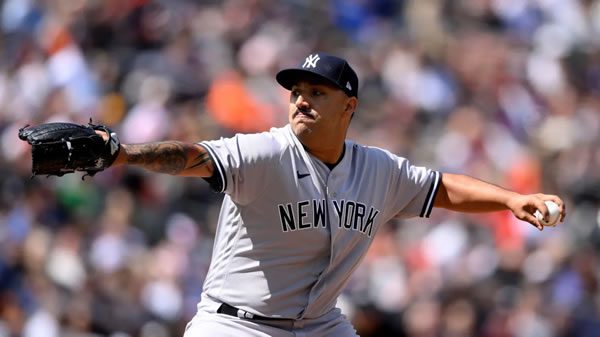 The New York Yankees host the Cleveland Guardians on Thursday October 13th at Yankee Stadium. The first pitch in this matchup is scheduled for 07:37 ET. The MLB Odds Board places New York as the favorite (-130), with an OU line set at 6.5.

The Guardians come into this matchup having suffered a 3-run loss to the NY Yankees (4-1). In the loss, Cleveland’s pitchers gave up four runs on five hits. With their six hits, the Guardians could only muster one run. Cleveland’s loss came as the underdog, getting 170.0 on the Moneyline. Combined, the Guardians and Yankees fell short of the over-under betting line of 7.0 runs. With this result, Cleveland’s over-under record dropped even further, moving to just 76-81-8.

The Guardians come into this game with a 4-1 record over their last five contests. During this time, they have an average scoring differential of +8. Cleveland has put together this record, despite averaging just 3.6 runs per game, compared to their season average of 4.25. So far, Cleveland has won over half of their 53 series played, going 27-16-10.

In their last game, New York took down the Guardians by a score of 4-1. In the winning effort, the team’s pitchers held the Guardians to 1 run and 6 hits. With their 5 hits, the Yankees could only muster 4 runs. New York picked up the win while being favored at -200.0. For the season, the team has been favored in 149 games, winning at a rate of 64.0%. Combined, the Yankees and Guardians’ run total fell below the over-under line of 7.0 runs. Now, New York had an over-under record of 77-82-4.

Across their last five contests, the Yankees are above .500, going 3-2. Their recent success is backed by an average scoring margin of +3 (last 5). New York has played above .500 baseball, despite averaging just 3.2 runs in their last five games. This is a drop in production compared to their season average of 4.98. On the season, New York has won more than half of their series, going 31-16-7.

Shane Bieber gets the start for the Guardians, with an overall record of 13-8. Through 31 appearances, Bieber has an ERA of just 2.92 while averaging 6.45 innings per appearance. Across his previous appearances, the right-hander has a batting average allowed of .232. This season, Bieber has been able to avoid giving up home runs, allowing just 0.81 per 9 innings. Per game, Shane Bieber is averaging 6.39, on a strikeout percentage of 25.0%. For the season, he has struggled with command averaging 1.57 walks per outing.

New York will roll with Nestor Cortes (12-4) as their starter. Currently, Cortes has a strong ERA of just 2.44 while pitching an average of 5.65 innings per outing. Hits have been hard to come by against the right-hander, as his batting average allowed is just .189. Cortes is giving up home runs at a rate similar to the league average, allowing 0.91 per 9 innings. Overall, Nestor Cortes has struck out 27.0% of the batters he has faced. On average, he averages 5.82 K’s per game. Cortes comes into the game hoping to improve his walk numbers, as he is averaging 2.16 free passes per outing.

Today’s matchup between the Cleveland Guardians and New York Yankees will be their 8th meeting of the season. Currently, New York is winning the season series 6-1. The over-under record in this series sits at 3-4. The average run total in these games is 9.14 runs per game. The averge scoring margin in these meetings is 4.43 runs.

Game 2 of this AL Divisional Series features an outstanding pitching matchup between Shane Bieber and Nestor Cortes. However, although Bieber is coming off a dominant outing vs the Rays, he will be dealing with a different animal in the New York Yankees. I recommend taking New York to pick up the win and take a 2-0 lead.

Free MLB Pick: Yankees Moneyline. Bet your MLB predictions for FREE this week by taking advantage of a 100% (or more!) bonus at one of the numerous top-rated bookies on our sportsbook bonus codes page!