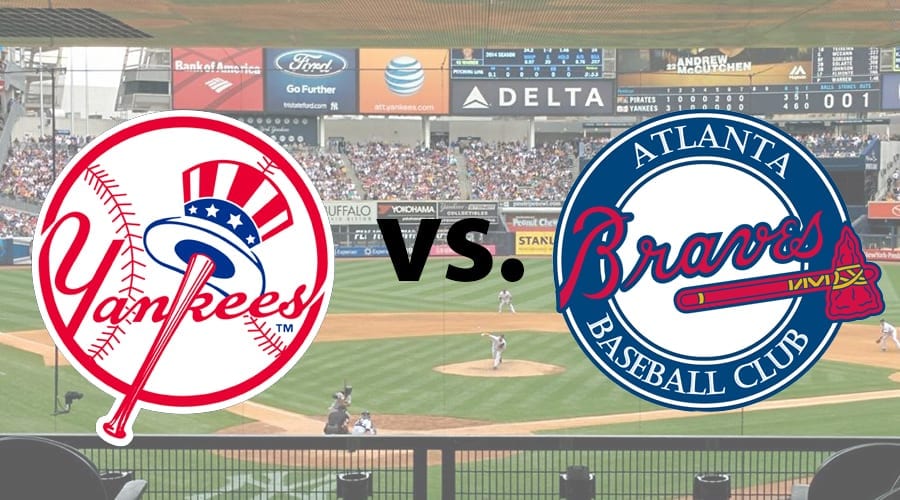 In the opener of a three-game interleague series, the New York Yankees welcome the Atlanta Braves to Yankee Stadium Monday night. At 48-34 (.585), the Braves have the best record in the National League. The Yankees own the best winning percentage (.667) in the American League, going 54-27 so far this season. Atlanta comes in winners of three straight, while the Yankees won two of three over the weekend against their arch rival Boston Red Sox. This series is sure to be an entertaining one as these are two of the most high-octane offenses in Major League Baseball. Veteran right-hander Anibal Sanchez (3-2, 2.68 ERA & 1.09 WHIP) gets the ball for the Braves, and Rookie Jonathan Loaisiga (2-0, 1.93 ERA & 1.29 WHIP) is set to toe the rubber for the home team.

Atlanta leads NL Standings approaching the break
The odds for the Atlanta Braves to have the best record in the NL at the midpoint in the season would’ve been astronomical to start the 2018 campaign, but two weeks away from the All-Star Break it’s looking quite probable. At 48-34 (.585), the young Braves are in first-place in the National League East Division. They’re three games ahead of the Philadelphia Phillies and six ahead of the reigning NL EAST Champion Washington Nationals. Atlanta has some of the best bats in the business, and they’ve accounted for 413 runs this season which is fifth best in the League. The Braves plus-82 run differential is also fifth best in the Majors thus far.

Over the weekend, the Braves swept a three-game set at Saint Louis, outscoring the Cardinals 22-10. In Sunday’s 6-5 win over the Cards, Atlanta received a stellar performance from starting pitcher Mike Foltynewicz (6-4, 2.02 ERA & 1.11 WHIP). “Folty” only allowed one hit and no runs over five frames, striking out nine in the process. Foltynewicz hasn’t allowed more than two runs in a start since May 4th. In his last nine starts, he’s 4-2 with an outstanding 0.87 ERA and 0.94 WHIP.

Three of the Top four hits leaders in the National League are Braves: Nick Markakis (104), Freddie Freeman (100) and Ozzie Albies (97). All three appear to be All-Star game bound this season. In Sunday’s victory, Freddie Freeman (.315 AVG, 16 HR, 56 RBI & .407 OBP) belted a two-run homer. Freeman’s fourth in the NL in batting average, tied for fifth in RBI and second inon-base percentage. I don’t think anyone would dispute that Freeman is the best first-basemen in all of baseball. Another Braves hitter who’s having a phenomenal year is Nick Markakis (.323 AVG, 9 HR, 56 RBI & .389 OBP). Markakis had six RBI in the weekend series against Saint Louis. He leads the National League in hits, is third in batting average and tied for fifth in RBI.

At 54-27 (.667), the New York Yankees are tied for first in the AL East Standings with the Boston Red Sox. Over the weekend, the Yanks took two of three off Boston while outscoring them 19-13. New York owns the best home record in the League at 31-12 (.721). The Bronx Bombers potent offense has accounted for 417 runs thus far, which is fourth best in MLB. Their pitching staff has been great too, allowing 306 runs all year (2nd MLB). New York’s plus-111 run differential is third-best in baseball behind only Boston and Houston.

Experience vs. Youth
Atlanta looks to veteran hurler Anibal Sanchez (3-2, 2.68 ERA & 1.09 WHIP) to start the series off on the right foot. Sanchez has been a welcome addition to the Braves rotation this season. In his first seven starts, Sanchez went 3-0 with a 1.94 ERA and 0.97 WHIP. However, things have taken a turn as of late. It’s been back-to-back losses for Sanchez in his last two starts as he’s accrued a 5.87 ERA and 1.63 WHIP. Sanchez looks to right the ship against a Yankees club he’s had tremendous success against historically. In five career starts at Yankee Stadium, Sanchez is 5-0 with a 1.90 ERA and 1.03 WHIP.

New York will send Rookie Jonathan Loasiga (2-0, 1.93 ERA & 1.29 WHIP) to the mound in the series opener versus the Braves. In his last start, Loasiga got the “W” at Philadelphia 4-2. He struck out eight over 5 1/3 innings, allowing just one hit and zero earned runs. At Yankee
Stadium, Loasiga is 1-0 in two starts with a 3.29 ERA and 1.83 WHIP. He was roughed up a bit versus Seattle in his second career start, allowing three earned runs over 3.2 frames. However, a miracle comeback and walk-off two run shot by Giancarlo Stanton gave the Yanks a 7-5 win and Loasiga a no-decision. Prior to being called up, Loasiga went 3-1 with a 4.32 ERA and 1.24 WHIP for AA-Trenton.

Dog or Favorite?
In the words of the late great Rodney Dangerfield, the Braves “aren’t getting no respect.” In a matchup between the NL’s and AL’s best, the oddsmakers say the Yankees are a -195 favorite. Essentially, the oddsmakers think the Yanks will take this one approximately two-thirds of the time. With the Braves at +183, (A top dimeline bookie will still be at 10 cents at -195) we’d have to win this one about 35% of the time to make the bet profitable. This year, Atlanta has been great as the underdog going 31-14 (.689) in such instances. The Yankees are 38-31 (.551) as the favorite this season. Sanchez has been outstanding in New York in his career. Loasiga looks like a promising talent, but he’s unproven and may be due for a reality check. This Braves offense is as potent as any, and they’ll be adding another quality bat to their lineup in this interleague series. All the value lies on the Braves side of the money line in Monday night’s series opener at Yankee Stadium.
Pick: Braves to take this one @ +183