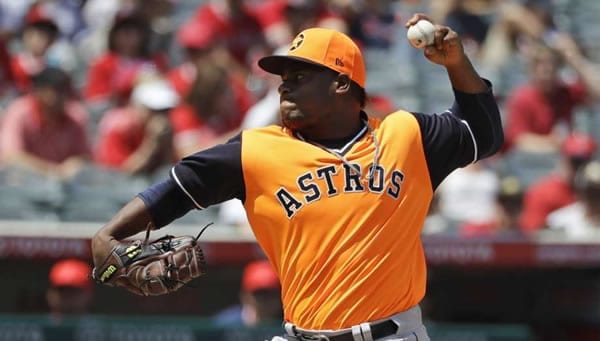 So much for the Astros keeping their offense rolling when the Yankees came to Houston. The Astros haven’t scored a single run off Yankee pitching, getting outscored 5-0 in the series to date. There wasn’t much they could do against Gerrit Cole pitching at his best, but getting shut down by four different Yankee relievers can’t happen to a team that’s tops in the league at scoring runs. Strangely, the Astros have been at their worst when they’ve been at home against the AL East. They’ve now dropped five in a row to Eastern teams at Minute Maid Park after losing a three-game sweep to the Orioles a couple of weeks ago, and except for the first game of the Baltimore series, the Astros haven’t topped three runs in any of those games.

But He’s the Exception

For whatever reason, Framber Valdez has been the one pitcher who hasn’t been part of the Astros’ recent string of unders. While the rest of the Astros have basically been abandoned by their offense in this series and in the Baltimore series, Valdez has consistently seen plenty of support at the plate. Over his past six starts, the minimum the Astros gave him was seven runs, and not coincidentally, he put four of those in the winning column on his own ledger.

For the most part, Valdez hasn’t needed support to that extent, although the win over Oakland in his most recent start was the exception. Valdez wasn’t sharp in that game, and the only reason the Astros emerged victoriously was that the bats woke up to the tune of nine runs. But given how well the Yankees have been pitching in this series, nine runs probably isn’t going to happen again if Valdez isn’t up to par.

That’s especially true given the run support that the Yankees have given to Jameson Taillon as of late, as they’ve averaged just over 10 runs a game when he takes the ball. Obviously, a pitcher has nothing to do with run support, but the Yankees have recently discovered that their bats are an important part of getting themselves back in the race. Up until this past series with the Astros, the Yankees had been piling up the overs, which cashed in six of their past eight games before arriving in Houston. But the Yankees’ old problem seems to be rearing its head again, or they left their bats at the Seattle-Tacoma International Airport. New York has managed to score five runs in their past three games, and if you’ve done the math, you know that they’ve scored five runs in this series, meaning they took a shutout in their final game in Seattle before arriving in eastern Texas.

The Yankees can see the All-Star Break’s finish line just a few hours away, but getting there isn’t easy for a team that needs wins and needs them now if they’re going to give themselves a chance to catch Tampa Bay. The Yankees have played to the over in four of Taillon’s past six starts, and they need a similar offensive showing here.

If the roof is left open, an 11-mile per hour wind blowing out to right field could make a difference, but with temperatures at 88 degrees, it seems more likely that the Astros will close the roof.

Valdez has gotten wins lately, but they haven’t really been the result of him pitching all that well as much as they have the Astros’ bats getting the job done. The Yankees seem like they’ve got something going here, and the Astros seem to be off right now in playing against the AL East at home. The value is with New York, so I’m taking the Yankees.