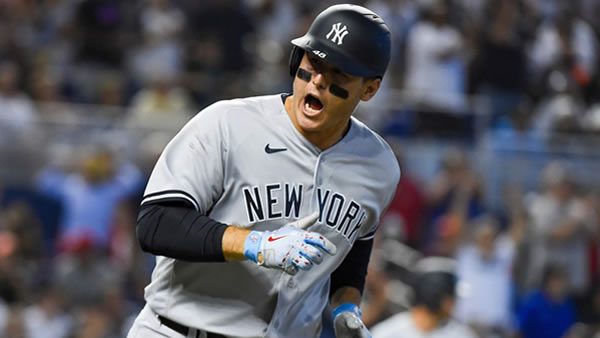 The St. Louis Cardinals host the New York Yankees on Saturday August 6th at Busch Stadium. The first pitch in this matchup is scheduled for 07:15 ET. The MLB Odds Board at BetOnline places New York as the favorite (-107), with an OU line set at 8.0.

The Yankees will look to rebound from a close, 4-3 loss to the Cardinals. New York’s pitching staff finished the game by allowing 5 hits, leading to 4 runs. On offense, the Yankees finished with 3 runs on 10 hits. This defeat came despite being favored at -155.0. So far, the team has been the favorite in 99 of their games, winning at a rate of 67.0%. Together, the Yankees and Cardinals stayed below the over-under line set at 8.5 runs. However, for the season, New York still has an overall over-under record of 54-50-3.

The Yankees will be hoping to pick up a win in today’s matchup, as they have gone just 1-4 over their last 5 games. This mark has come on an average run margin of just -4. In their last 5 contests, New York is averaging 5.0 runs per game, right in line with their season average of 5.33. So far, New York has won over half of their 36 series played, going 23-8-5.

The Cardinals will look to add another win, as in their last game, they defeated the Yankees by a score of 4-3. In the win, the pitching staff allowed just 3 runs on 10 hits. The Cardinals offense ended the game with just 4 runs on 5 hits. Despite being the underdogs, getting 140.0 on the moneyline, the Cardinals still picked up the win. So far, the team has gone into 45 games as the underdog, still finding the win column at a rate of 38.0%. Combined, the Cardinals and Yankees run total fell below the over-under line of 8.5 runs. This result comes as no surprise, as the team’s over-under record is just 48-54-4.

The Cardinals come into the matchup looking to stay hot, going 5-0 over their last five contests. During this time, the team’s run differential sits at +18. St. Louis is still playing winning baseball, even with their offense averaging just 5.2 runs per game, compared to a season-long mark of 4.64. On the season, St. Louis has won more than half of their series, going 16-9-8.

New York will roll with Domingo German (1-1) as their starter. So far, German has put together an ERA of 6.39. In his appearances leading up to today, he has lasted an average of 4.07 innings. Compared to other starters, the right-hander has a high BA allowed, currently sitting at 0.304. Opposing batters have been able to drive the ball with power against German, averaging 2.95 homers per 9 innings pitched. Up to this point, German has a strikeout percentage of just 16.0% and a per game average of 3.33. Throughout the season, German has avoided walking batters, allowing just 4.26 per contest.

The St. Louis Cardinals will send Jordan Montgomery to the mound with an overall record of 3-3. Montgomery gets the start with an ERA of 3.69. On average, he has lasted 5.44 innings per appearance. So far, Montgomery has a batting average allowed of 0.236. Home runs have been an issue for Montgomery, as he is allowing an average of 1.18 per 9 innings pitched. Per game, Jordan Montgomery is averaging 4.62, on a strikeout percentage of 21.0%. Montgomery comes into the game hoping to improve his walk numbers, as he is averaging 1.81 free passes per outing.

For the season, the New York Yankees and St. Louis Cardinals will be playing their 2nd game of the season. St. Louis holds the edge in the series at 1-0. The over-under record in this series sits at 0-1.

Heading into Saturday’s matchup between New York and St. Louis, the Yankees have the slight edge on the moneyline. Look for former Yankee, Jordan Montgomery to struggle vs his old team, as he has given up 9 earned runs over his last 6 1/3 innings. I recommend taking New York on the moneyline.

Free MLB Pick: Yankees Moneyline. Football is coming! Boost your bankroll with a HUGE 100% real cash bonus on your first deposit of $100 to $500 when you use bonus code PREDICTEM at Betnow Sportsbook!