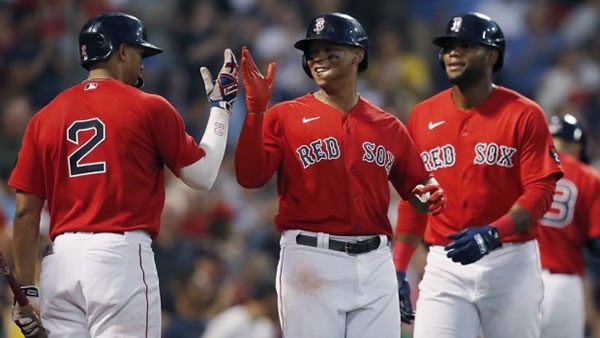 The Kansas City Royals host the Boston Red Sox on Sunday, August 7th at Kauffman Stadium. The first pitch in this matchup is scheduled for 02:10 ET. The MLB Odds Board places Boston as the favorite (-130), with an OU line set at 9.5.

The Red Sox will look to rebound from a close, 5-4 loss to the Royals. Boston’s pitching staff finished the game by allowing 8 hits, leading to 5 runs. On offense, the Red Sox finished with 4 runs on 8 hits. Red Sox suffered the loss, despite being favored at -154.0. So far, the team has been the favorite in 59 of their games, winning at a rate of 56%. Together, the Red Sox and Royals stayed below the over-under line set at 9.5 runs. This outcome pushed Boston’s over-under record further below .500 at 49-53-7.

The Red Sox will be hoping to pick up a win in today’s matchup, as they have gone just 2-3 over their last 5 games. In this rough stretch of games, the team’s run differential comes in at -6. A key reason for Boston’s recent struggles is an offense averaging just 3.4 runs per game over their last 5 contests, compared to a season average of 4.48. Boston’s overall series record is just 13-16-5.

The Royals will look to add another win, as in their last game, they defeated the Red Sox by a score of 5-4. In the win, the pitching staff allowed just 4 runs on 8 hits. Offensively, they finished with 5 runs on 8 hits. This was a good win for the Royals, as they were underdogs at 130.0 on the moneyline. In their 77 games as the underdog, their straight-up win percentage sits at 35.0%. With this result, the Royals and Red Sox combined to fall below the over-under line of 9.5 runs. With this outcome, the team’s over-under record drops back to even at 52-52-4.

The Royals come into today’s game looking to turn things around, as they are just 2-3 over their last 5 games. During this time, the team has a run differential of -8. In their 5 most recent contests, the team is scoring at a rate (3.8) similar to their season-long average of 3.84. Kansas City has a below .500 series record of just 10-21-3.

Boston will roll with Kutter Crawford (3-3) as their starter. To date, Crawford has an ERA of 3.86 while lasting an average of 3.33 innings per appearance. Crawford comes into the game with a batting average allowed of 0.239. Opposing batters are hitting for power at a below-average rate against Crawford, as he is allowing just 1.02 per 9 innings. Overall, he is averaging 3.5 per game, on a K rate of 25.0%. Throughout the season, Crawford has avoided walking batters, allowing just 2.85 per contest.

Brad Keller gets the start for the Royals, with an overall record of 5-12. To date, Keller has an ERA of 4.76 while lasting an average of 5.65 innings per appearance. Teams have been able to rack up runs against him, as he has a batting average allowed of 0.264. So far, Keller has managed to keep the ball in the ballpark, allowing just 0.95 home runs per 9 innings. Per game, Brad Keller is averaging 3.8, on a strikeout percentage of 16.0%. Keller comes into the game hoping to improve his walk numbers, as he is averaging 3.26 free passes per outing.

For the season, the Boston Red Sox and Kansas City Royals will be playing their 4th game of the season. Currently, Kansas City is winning the season series 2-1. The over-under record in this series sits at 2-1. The average run total in these games is 10.57 runs per game. The averge scoring margin in these meetings is 2.67 runs. Going back to last year, Boston won the season series, 5 games to 2. The over-under record in last year’s matchups was 3-3, with the average run total being 10.57 runs per game. On average, the winning team won by a margin of 4.57 runs per contest.

Leading into Sunday’s American League matchup between Boston and Kansas City, the Red Sox are the favorite on the moneyline. Look for Boston to finish up the series with a road win, as Brad Keller has taken the loss in 3 straight games and is coming off one of his worst outings of the season. I like Boston on the moneyline.