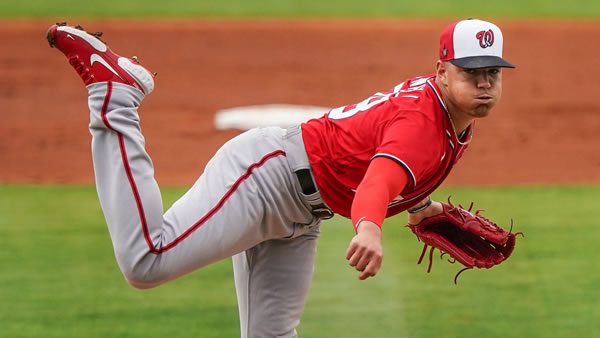 The Washington Nationals host the Cincinnati Reds on Friday August 26th at Nationals Park. The first pitch in this matchup is scheduled for 07:05 ET. The MLB Odds Board places Washington as the favorite (-115), with an OU line set at 9.0.

In Cincinnati’s last game, they fell to Philadelphia by a score of 4-0. In the loss, Cincinnati’s pitchers gave up 4 runs on 7 hits. On offense, the Reds’ 5 hits and 5 runs ended up not being enough to pull out the win. Cincinnati’s loss came as the underdog, getting 280.0 on the moneyline. This game went over the posted over-under line of 8.5 runs. Cincinnati now has an over-under record of 63-57-2.

Over the Reds’ last 5 contests, they have a record of just 1-4. In this rough stretch of games, the team’s run differential comes in at -6. In their last 5 contests, Cincinnati is averaging 4.2 runs per game, right in line with their season average of 4.27. Cincinnati’s overall series record is just 12-20-7.

Washington will look to keep things rolling in today’s game, as they most recently took down Mariners by 2 runs 3-1. In the winning effort, the team’s pitchers held the Mariners to 1 run and 5 hits. With their 9 hits, the Nationals could only muster 3 runs. Despite being the underdogs, getting 255.0 on the moneyline, the Nationals still picked up the win. So far, the team has gone into 107 games as the underdog, still finding the win column at a rate of 33.0%. Combined, the Nationals and Mariners’ run total fell below the over-under line of 8.0 runs. With this outcome, the team’s over-under record drops back to even at 59-59-7.

In their last 5 contests, the Nationals have just 2 wins, going 2-3. Despite this record, the team still has a positive run differential of +1 (last 5). The team’s offense is partly to blame for their recent slump, as they have averaged just 2.6 runs over their last 5 game. Washington has a below .500 series record of just 8-27-4.

Mike Minor gets the start for the Reds, with an overall record of 2-10. To date, Minor has an ERA of 6.44 while lasting an average of 5.16 innings per appearance. Teams have been able to rack up runs against him, as he has a batting average allowed of 0.293. Opposing batters have been able to drive the ball with power against Minor, averaging 2.24 homers per 9 innings pitched. In terms of strikeouts, Mike Minor has a strong strikeout percentage of 17.0%, including a per-game average of 4.21. For the season, he has struggled with command averaging 3.59 walks per outing.

The Nationals will be giving Cade Cavalli his first start in the majors. This year, he has made 20 appearances for AA Rochester, putting together a 6-4 record and 3.71 ERA. For the season, he has a WHIP of just 1.175.

Today’s matchup between the Cincinnati Reds and Washington Nationals will be their 5th meeting of the season. Currently, Washington is winning the season series 3-1. The over-under record in this series sits at 2-2. The average run total in these games is 8.29 runs per game. In these matchups, the average scoring differential sits at 3.25 runs. Going back to last year, Cincinnati won the season series, 5 games to 2. In these 7 meetings, the two teams combined for an over-under record of 3-4. Last year, the Reds and Nationals averaged 8.29 runs per game. The average scoring differential in this series was 2.29 runs per game.

Heading into Friday’s matchup between Cincinnati and Washington, the Nationals are the slight favorite on the moneyline. Even though Cade Cavalli is making his first start in the big leagues, he has a chance to kick things off right against an inconsistent Reds lineup. I like Washington on the moneyline.

Free MLB Pick: Nationals Moneyline. Got a minute? We highly recommend you read this article! It’ll change the way you bet forever! (And save you big money!) How Reduced Juice Works.