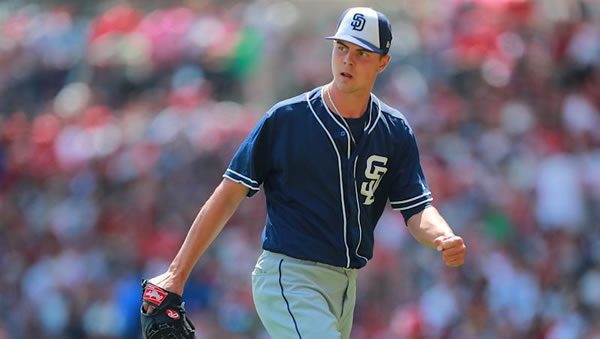 Get the best net deposit bonus >>> You can DOUBLE your bankroll with a 100% bonus!

The San Diego Padres host the Colorado Rockies on Saturday June 11th at Petco Park. The first pitch in this matchup is scheduled for 10:10 ET. The MLB Odds Board places San Diego as the favorite (-240), with an OU line set at 7.5.

The Rockies are hoping to get back on track after falling to the Padres, by a score of 9-0. Colorado’s pitching staff finished the game by allowing 14 hits, leading to 9 runs. Offensively, they finished with just 0 runs on 5 hits. The loss came as Colorado was the betting underdog, getting 210.0 on the moneyline. This game went over the posted over-under line of 7.5 runs. Colorado has had more than half of their games go over the over-under line (31-25-2).

The Rockies will be hoping to pick up a win in today’s matchup, as they have gone just 2-3 over their last 5 games. This mark has come on an average run margin of just -7. A key reason for Colorado’s recent struggles is an offense averaging just 3.4 runs per game over their last 5 contests, compared to a season average of 4.53. Colorado’s overall series record is just 8-10-1.

In their last game, the San Diego Padres picked up a 9-run win over the Rockies by a score of 9-0. In the win, the pitching staff allowed just 0 runs on 5 hits. Offensively, they finished with 9 runs on 14 hits. In the game, San Diego was able to take care of business as they were the favorite at -260.0. So far, the team has won 66.0% of the games in which they were favored. The Padres and Rockies went over the run total line set at 7.5 runs. Against the run total, San Diego is just 26-30-2.

In their last 5 games, the Padres have put together a record of 4-to 1. Their recent success is backed by an average scoring margin of +23 (last 5). Overall, the Padres are averaging 4.52 runs per contest. But, over their last 5 outings, they have been scoring at a clip of 8.0 runs per contest. On the season, San Diego has won more than half of their series, going 12-5-2.

Kyle Freeland gets the start for the Rockies, with an overall record of 1-5. To date, Freeland has an ERA of 4.53 while lasting an average of 5.38 innings per appearance. Opposing teams have hit the ball well against the left-hander, with a batting average of 0.281. Opposing batters are hitting for power at a below-average rate against Freeland, as he is allowing just 0.91 per 9 innings. Overall, he is averaging 4.09 strikeouts per game, on a K rate of 17.0%. Command has been a problem for Freeland, as he is giving up 3.02 walks per outing.

San Diego will roll with Mackenzie Gore (4-1) as their starter. Through 9 appearances, Gore has an ERA of just 1.5 while averaging 5.33 innings per appearance. So far, batters are hitting just 0.2 against him. Not only does Gore have a strong batting average allowed, but he has also avoided giving up home runs. In his previous outings, opponents are averaging just 0.19 home runs allowed per 9 innings. Gore has accumulated a strikeout percentage of 30.0% and a per-game average of 6.33. Throughout the season, Gore has avoided walking batters, allowing just 3.19 per contest.

Today’s matchup between the Colorado Rockies and San Diego Padres will be their 2nd meeting of the season. San Diego holds the edge in the series at 1-0. Through 1 game, the series’ over-under record is 1-0, with the average run total sitting at 7.68 runs per game. The averge scoring margin in these meetings is 9.0 runs. Last season, Colorado picked up the series win, 11 games to 8. The over-under record in last year’s matchups was 7-12, with the average run total being 7.68 runs per game. On average, the winning team won by a margin of 3.05 runs per contest.

Heading into today’s NL West matchup between Colorado and San Diego, the Padres are the heavy favorite to pick up the win. Look for San Diego to pick up a convincing win, as MacKenzie Gore has given up just 1 run over his past 4 starts. I like the Padres to cover the runline.

Free MLB Pick: Padres Runline. Bet your MLB predictions for FREE this week by scoring a 100% bonus up to $500 at Betnow Sportsbook!