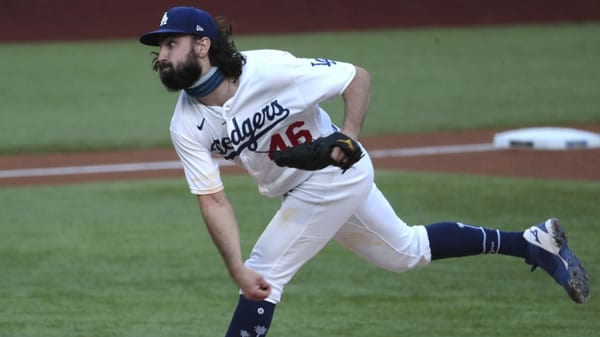 The Chicago White Sox host the Los Angeles Dodgers on Wednesday, June 8th at Guaranteed Rate Field. The first pitch in this matchup is scheduled for 08:10 ET. The MLB Odds Board places Los Angeles as the favorite (-165), with an OU line set at 8.5.

The Dodgers will look to bounce back from a tough loss to the White Sox by the score of 4-0. Los Angeles’s pitching staff finished the game by allowing 7 hits, leading to 4 runs. With their 5 hits, the Dodgers could only muster 0 runs. Dodgers suffered the loss, despite being favored at -126.0. So far, the team has been the favorite in 54 of their games, winning at a rate of 63.0%. Together, Dodgers and White Sox stayed below the over-under line set at 8.5 runs. With this result, Los Angeles’s over-under record dropped even further, moving to just 24-28-3.

In their last 5 games, the Dodgers are below .500, at 2-3. This mark has come on an average run margin of just -3. Los Angeles’s offense is in the middle of a cold streak, as their offensive production has dipped to just 3.2 runs per game over their last 5 contests. So far, Los Angeles has won over half of their 18 series played, going 11-6-1.

The Chicago White Sox are coming off a big win over the Dodgers by a score of 4-0. In the win, the pitching staff allowed just no runs on 5 hits. With their 7 hits, the White Sox’s 4 runs were more than enough. This was a good win for the White Sox, as they were underdogs at 116.0 on the moneyline. In their 20 games as the underdog, their straight-up win percentage sits at 35.0%. Combined, the White Sox and Dodgers’ run total fell below the over-under line of 8.5 runs. Now, Chicago had an over-under record of 24-27-2.

In their last 5 games, the White Sox have put together a record of 3-2. Chicago has managed to play above .500 baseball, despite their last 5-scoring margin sitting at -2. Chicago is still playing winning baseball, even with their offense averaging just 3.8 runs per game, compared to a season-long mark of 3.66. On the season, Chicago has won more than half of their series, going 9-6-3.

The Los Angeles Dodgers will send Tony Gonsolin to the mound with an overall record of 6-0. Currently, Gonsolin has an ERA of just 1.59 while pitching an average of 5.1 innings per outing. Hits have been hard to come by against the right-hander, as his batting average allowed is just 0.159. In addition, to his strong BA allowed, he has been able to limit power, allowing just 0.53 home runs allowed per 9 innings. Overall, he is averaging 4.9 per game, on a K rate of 25.0%. Leading into the game, he has shown a strong command of his pitches, averaging just 3.0 walks per contest.

Johnny Cueto gets the start for the White Sox, with an overall record of 0-2. In his previous outings, Cueto has lasted an average of 6.05, putting together an ERA of just 2.92. So far, opposing teams have hit the ball well against the right-hander, posting a batting average allowed of 0.253. Opposing batters are hitting for power at a below average rate against Cueto, as he is allowing just 0.37 per 9 innings. Up to this point, Cueto has a strikeout percentage of just 18.0% and a per game average of 4.75. Leading into the game, he has shown a strong command of his pitches, averaging just 2.55 walks per contest.

For the season, the Los Angeles Dodgers and Chicago White Sox will be playing their 2nd game of the season. Chicago holds the edge in the series at 1-0. Through 1 game, the series’ over-under record is 0-1, with the average run total sitting at nan runs per game. In these matchups, the average scoring differential sits at 4.0 runs.

Heading into Wednesday’s matchup between Los Angeles and Chicago, the Dodgers will turn to Tony Gonsolin to get the team back on track. Look for the White Sox to struggle at the plate, as Gonsolin enters the game with a WHIP of just .88. I like the Dodgers to cover the runline.

Free MLB Pick: Los Angeles Dodgers Runline -1.5. Note: It’s a great day to take charge of your betting life and decide that you’re not going to overpay for odds anymore! Stop paying extra for odds! YOU DON’T NEED TO! Start betting at cheaper prices (odds) TODAY by making the switch to BetAnySports! We’ve advertised them for over 10 years with ZERO complaints! Click here to stop wasting money!