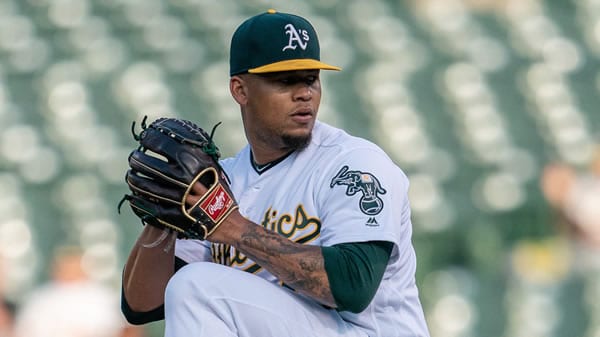 If Oakland is going to claim the AL West title, it sure won’t be because of anything they’ve managed to do at the Oakland Coliseum. For whatever reason, the Athletics are only average when they play at home, owning a 14-13 record in the Bay Area in 2021. Odds are pretty good that part of the reason is that playing in a second-rate stadium wears on you, and the Athletics enjoy better situations when they go on the road than they do at their current home park.

However, home-field issues usually do not apply to starting pitcher Frankie Montas. While the rest of the Athletics have played middling baseball at home, Montas has shaken off the situation and simply focused on getting the job done, despite pitching in a decrepit stadium that doesn’t draw much in the way of fans. His most recent start was a rare setback for him at home, but even that gets an asterisk because he only gave up two runs during five innings before the bullpen blew up the game and allowed the Astros to run away with it in the final four innings. Montas isn’t always the most efficient pitcher at home, as his past four home starts have all gone over the total, but he consistently competes on the Oakland Coliseum and gives his team a chance to win each time.

The playoff drought continues to weigh on Seattle, and the past week hasn’t helped. The Mariners remain the only team that hasn’t played in MLB’s postseason in the past 20 years, as they couldn’t even find their way into the expanded format in the 2020 sprint. Because of the prolonged drought and because of the presence of their more successful next-door neighbors, the Seahawks and Sounders, losing streaks seem to affect the Mariners harder than they might with a club that’s had more recent success.
That’s what seems to be the case right now, as Seattle followed up an encouraging series win over Cleveland by falling flat on its face against Detroit and San Diego. Losing to the Padres, who are one of the National League’s strongest sides, is one thing, but a home sweep at the hands of the toothless Tigers is a sign of a real problem. All season long, the Mariners have run into problems with their lack of hitting, and it seems that it’s finally catching up to them. During the six-game skid, only once have the Mariners scored more than two runs.

If Yusei Kikuchi could get some run support, he’d be in much better shape. Granted, you could say that about any Seattle pitcher, given that the Mariners can’t hit at all outside of Mitch Haniger, but Kikuchi has really run into some bad luck when it’s his turn to take the ball. In each of his past three starts, he’s given up exactly three earned runs, but the Mariners gave him one run of support in one game and ran into John Means’ almost-perfect game against Baltimore in another. The one time that Kikuchi has earned a win this season, he had to pitch a shutout to do it because the Mariners gave him the one run he needed and nothing else in a 1-0 win over Houston.

When he’s on his game, Kikuchi is excellent at missing bats and forcing teams off balance. When the ball gets put in play, he runs into real problems. In eight starts this year, he’s never failed to hold the opponents to three runs or less when he fans at least six hitters. When he didn’t, which has happened twice, he got tagged for five earned runs each time.

The wind could carry the ball in this one, as it’s blowing out to dead center at 10 miles per hour on a 60-degree evening in the East Bay.

With Seattle circling the drain and showing no signs of getting its offense going, I have to lean toward Oakland in this situation. The Athletics might not be the best home team, but they know how to start off a series well, and they should be able to take advantage of facing the Mariners’ weak lineup. Kikuchi’s recent performances have me thinking that he’ll be able to keep Seattle in the game, but close isn’t good enough here unless you want to take the Mariners on the run line.
Oakland has four one-run victories at home as a favorite, so backing Seattle on the run line might not be the worst idea. However, for the actual result, I’m taking the Athletics. Bankroll running low? Instead of redepositing for NOTHING, you should consider grabbing a 100% REAL CASH BONUS on your first deposit of $100 to $1000 at BetNow Sportsbook!