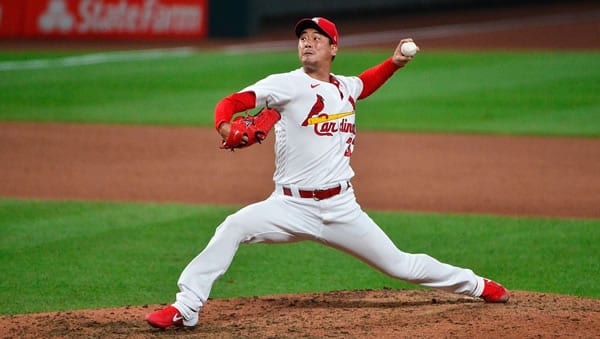 Quite frankly, this series has been one-way traffic from beginning to end in 2021, as the Cubs have beaten the Cardinals pretty soundly in six out of seven games this year. Other than two games at Busch Stadium that saw the teams split a pair of 2-1 results, the result usually hasn’t even been close, with the Cubs either pounding the Cardinals with an avalanche of runs or both teams getting shut down and the Cubs emerging with a shutout victory. Things have actually been even worse for the Cardinals when they’ve made the trip up I-55 to Chicago, as they’ve now played four games at Wrigley and have been outscored 27-12 by the Cubs. Only two out of four were even save situations, as the Cubs have seemed to save their best baseball for taking on their archrivals in front of their fans.

Keeping Them Off the Bases

The Cardinals’ season might be spiraling out of control, but Kwang-Hyun Kim certainly isn’t the reason for the Redbirds looking at what could be their first losing season since 2007. Kim has been excellent when he’s taken the ball as of late, holding opponents to one run or less in four of his past five starts. Plus, going back a start further, five of his past six opponents have failed to top three hits against him. Kim’s not the kind of pitcher who’s going to dominate opponents with a powerful strikeout pitch, but he’s also not the kind of pitcher who’s going to beat himself with a critical mistake or an ill-timed walk. Over the past seven starts, he’s walked just 13 hitters, and five of them got squeezed into one tough outing against the Marlins, in which he was able to wriggle free and make sure it didn’t do any damage to the Cardinals. As long as his lineup gives him a little bit of support, he’ll be well set up to earn a win.

A lack of offense was one big reason that things fell apart for the Cubs during their infamous 10-game losing streak, as Chicago has seen its batting average drop to .227, which is good for 27th in the majors. But there are signs that the Cubs are beginning to break out of their doldrums, even as they find themselves under .500 with the All-Star break closing in. First, there’s the face that the over has cashed in five consecutive Cubs games. The Cubs have been an under team all season, but they’ve scored 28 runs in their past four games, even with a shutout in one of them, so they might be starting to figure out how to get runs across the plate with this offense. Already, the Cubs have earned a mediocre average of runs per game despite their struggles at the plate, so they’re at least taking advantage of their chances.

The second sign is that the Cubs’ hitters have been mashing the ball as of late. In three out of four games, the Cubs have managed to trigger the over without any help from the opposing team, and in the fourth, the pitching proved so inept that the Phillies hit the over by themselves. Chicago started to break out the bats in a 15-10 loss to the Phillies on Tuesday, and if they can keep up the hitting, some of these tight losses could turn into key wins.

This game could be a wet one in Chicago, as wind is scheduled to blow in from right-center at 13 miles per hour, and rain could be in the forecast at first pitch. Temperatures are expected to be at 72 degrees.

Given that the Cardinals have been awful away from home and the Cubs have a pretty good home record, this one seems like a fairly straightforward contest. Kim will do his best to keep St. Louis in the game, but the Cardinals’ bats aren’t likely to provide enough to get the Redbirds a victory in this one.

I expect these teams to get into the bullpens, and that could mean another explosive evening. Give me the Cubs.