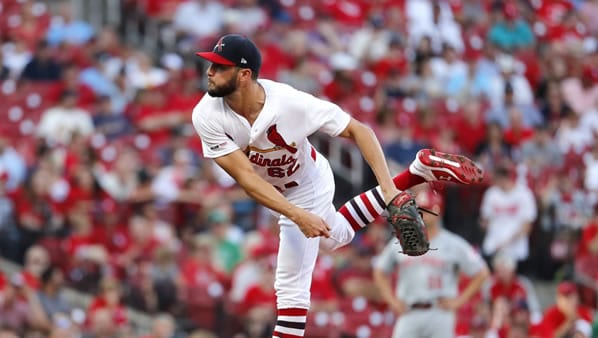 By all accounts, Yu Darvish has been a much better pitcher at Wrigley Field in 2020 than he was in 2019. It took him about a half-season to get adjusted to Chicago’s North Side, but he seems to have figured it out now and is having a strong start to the season.

But he hasn’t figured out pitching against the St. Louis Cardinals yet. The Cardinals are the one team in the majors that Darvish has never beaten, and even when he’s done everything right, St. Louis has found a way to get a victory. Case in point, last year, Darvish struck out 12 in his final appearance of the year against the Cardinals. It didn’t matter because he couldn’t get the run support he needed, taking a 3-2 loss to the Redbirds.

Darvish seems to have come into his own as of late, as he’s coming off an 11-strikeout performance against Milwaukee. But his struggles against St. Louis last season and the Cardinals’ performance in Chicago makes one wonder if Darvish is due for a rough performance.

ATTENTION SMALL BETTORS! DEPOSIT $25 AND GET AN ADDITIONAL $50 ADDED TO YOUR ACCOUNT AT INTERTOPS! 200% BONUS! GETCHA SOME FREE BETS!

Brad Miller has not played many games this season because of the Cardinals’ problems with COVID, but when he’s gotten on the field, he’s gotten the job done for the Redbirds. The St. Louis third baseman has hit .444 this season and whacked two home runs in the second game of Monday’s doubleheader, which kept the Cardinals in a game that they ultimately lost by a run.

The big question is, how much of this surge is real? Miller has been a career .241 hitter, and he’s now in his eighth season in the big leagues, so is this just a hot start, or has he made the ultimate adjustment since joining the Cardinals this season? Odds are, he’ll eventually cool off, but for now, he’s one to ride for both the Cardinals and for a possible player prop bet if you can find a reasonable price.

At the time of this writing, the under isn’t on the board yet, but when it goes on the board, it’s likely to be a good play. Nine runs or less has been the rule for St. Louis this season, as just one of the Cardinals’ 10 games this year has seen more than that number, and that was with St. Louis scoring nine runs against the Pirates. With solid pitching on the mound and the wind blowing in, expect this to be a lower-scoring affair.

With winds coming from the northeast at 11 miles an hour and temperatures at 77 degrees, expect a lower-scoring contest.

I think these teams are going to get the job done on defense, so when it comes on the board, I really want the under. However, until it goes on the board, I’m going to lean toward the Cardinals. I’ve been impressed with how they’ve come out of COVID, and I’m not totally sold on Darvish figuring out his problems with the Cardinals, certainly not at the offered price. Give me the Cardinals.