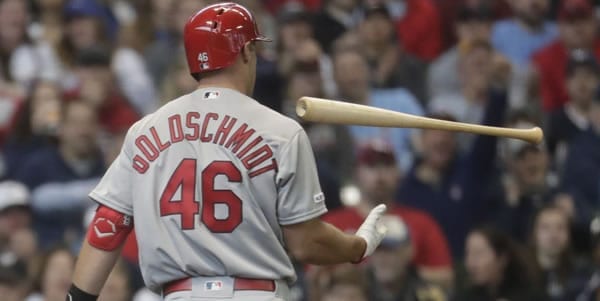 The Washington Nationals swept two games in St. Louis to begin this National League Championship Series and look to go up 3-0 at home when the teams meet for Game 3 Monday night in DC. So the Nationals are now two wins away from their first World Series berth in franchise history, while the Cardinals are trying to pull off the rare trick of coming back from an 0-2 deficit to win a playoff series. How are we playing Game 3 with our free MLB pick?

MLB playoff betting odds opened Washington and Strasburg at around -125 for Game 3 over St. Louis and Flaherty, with an over/under of seven runs. Early betting action then bumped the Nats to -135.

Washington took the opener of this NLCS last Friday in St. Louis 2-0, then won Game 2 Saturday 3-1. The Nationals cashed in as +130 underdogs with Anibal Sanchez Friday, then hit the pay window as -130 favorites with Max Scherzer Saturday.

Also, both those games played under their totals.

With Saturday’s win, Washington is 6-2 in these MLB playoffs.

With Saturday’s loss, the Cardinals are 3-4 in these playoffs.

Strasburg, by our stringent standards, is 21/35 on quality starts this season and three for his last four. Last Wednesday in Game 5 of that divisional-round series against the Dodgers, he allowed three runs and six hits, including two home runs, through six innings of that 7-3 Washington extra-innings victory. And over his last five appearances, he’s allowed just five runs and 18 hits through 28 innings, with 37 strikeouts against only four walks.

The Nationals are 23-12 with Strasburg this season, 4-0 over his last four starts.

Over two starts this season against the Cardinals Strasburg allowed three runs and nine hits through 11 2/3 innings, with 15 whiffs. Washington split those two games.

Flaherty is 20/35 on quality starts this year, working on a run of five in a row. Last Wednesday, in Game 5 of that NLDS against Atlanta, he gave up just one run and four hits through six frames of that 13-1 St. Louis victory. And over his last five starts, he’s allowed only five runs and 18 hits through 35 innings, with 41 K’s against six bases on balls.

The Cardinals are 18-17 with Flaherty this year, 3-2 over his last five starts.

In his only career start against Washington, back in September of last season, Flaherty allowed one run and three hits through five innings of a 4-3 St. Louis defeat.

St. Louis batted .245/.320/.412 against right-handed pitching this season. But Cardinals bats have managed just four hits through the first two games of this series, three singles and a gift double.

The Cardinals pen put up a 3.82 ERA this season and a 1.22 WHIP while holding foes to a ML-low .670 OPS. We rank this unit among the top three or four bullpens in Baseball this year.

The Nationals bullpen posted a ML-worst 5.66 ERA this season and a 1.48 WHIP while allowing an .800 OPS. So we rank this unit among the bottom three or four bullpens in Baseball. However, over their last four games, all wins, Washington relievers have allowed just one run and four hits through 9 1/3 innings of work.

Los Angeles own a significant advantage in the pitching match-up and edges with both the sticks and in the bullpen, so we obviously like the Dodgers here. But that spread is too much. So we’ll give the run and a half and play LA against the MLB run line.