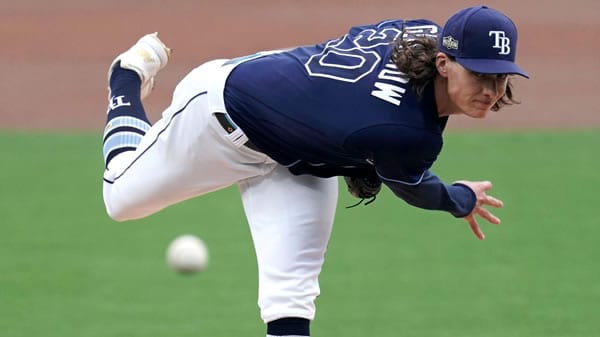 This will be a unique World Series in several ways, but one of the biggest will be the differing levels of pressure facing each team. On the Rays’ side, the pressure couldn’t be lower. Even though they’re one of the best-run organizations in the game, Tampa Bay barely moves the needle in its own market, consistently running well behind the Buccaneers and the Lightning (as well as college football in some situations). With the Lightning already owners of the Stanley Cup and the Bucs enjoying their best season in years, there’s absolutely no pressure whatsoever on the Rays.

The situation couldn’t be more different for the Dodgers. This is their third bite at the cherry, and even though they won the sympathy of America following the Astros’ scandal, they still haven’t won the World Series since 1988. Los Angeles is absolutely starved for a championship, and with the Dodgers having gone all-in on getting the title this year, no excuses will be accepted in Southern California. That kind of pressure can work either way, and it seemed to work to Los Angeles’ advantage in the NLCS when they came back from a 3-1 deficit to defeat Atlanta. But it’s the World Series that’s brought out the worst in the Dodgers, and if things get difficult early, it’s anyone’s guess as to whether the past ends up getting in their heads.

Aces to the Hill

The Dodgers’ seventh game against the Braves couldn’t have gone better from a pitching standpoint, as they now have Clayton Kershaw on regular rest instead of burning him in a relief role. Kershaw has mostly made up for his failures in the 2019 postseason, and if he’s on his game, Tampa Bay’s going to have a tough time getting runs early in the game. But Kershaw had to leave the game early in his last start, and once he was out of the game, the Braves teed off on the Dodgers’ bullpen.

Tampa Bay has the opposite problem with Tyler Glasnow going to the mound, as Glasnow really hasn’t been the same pitcher he was in 2019 this season. His ERA wasn’t all that great during the regular season, and he’s had to rely on his hitters to bail him out. Worse, when he wasn’t missing bats, there was a real concern about the ball landing in the seats. So far, Glasnow has served up six home runs in the postseason, and in his past seven starts, he’s given up a total of 11 homers. Given what the Dodgers did in Game 7 against the Braves, the Rays absolutely can’t afford to see Glasnow’s problems continue if they’re going to get a win here.

There’s no denying it: the Dodgers are old hats at this. They’ve been here twice before and lost to better teams. They believe that they’re the best team in the game, which is their time to prove it. With a lineup that includes the likes of Corey Seager, Cody Bellinger, Justin Turner, and Mookie Betts, there isn’t a weak link or inexperienced spot in the L.A. lineup.

Tampa Bay is again different. The Rays have next to no experience in the World Series, and what little they do have is in the person of Charlie Morton. But Tampa Bay does have a strong, talented bullpen and a rookie in Randy Arozarena, who has had a fantastic postseason to this point. The Rays will have to stay loose in their first trip to the World Series in 12 years and put the pressure on the Dodgers. If they get an early lead, Los Angeles’ experience of failing twice in the Fall Classic could work against it.

The wind is blowing south-southeast at eight miles an hour, which could push balls in from the fences, helping out both pitchers. Temperatures are expected to hover in the low 70s.

Los Angeles really has to get a win in Game 1 and set the tone, while Tampa Bay realistically just needs to get one of the first two games to put some pressure on the Dodgers. If the Dodgers fail to get a win out of Kershaw’s start, things really shift in Tampa Bay’s favor, as the Rays would have earned one of the wins they need against the Kershaw-Walker Buehler combination.

I think Los Angeles does enough here to get the first game and set themselves up to dictate the rest of the series. I’ll go with the Dodgers in the opener. Want more FREE CASH to make your World Series bets? Deposit $100 to $300 and get a dollar for dollar, matching 100% REAL CASH bonus at MyBookie Sportsbook!