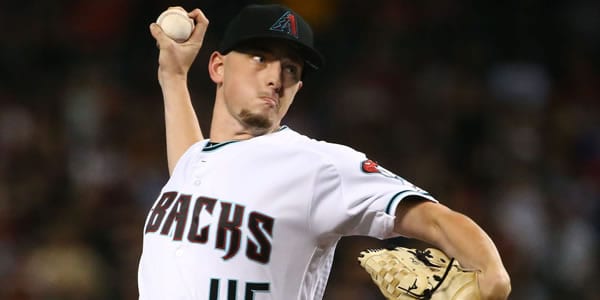 After splitting the first two games of this three-game NL West series, the Giants and Diamondbacks play a rubber match Sunday afternoon in Phoenix. San Francisco is trying to play its way into the National League playoff picture, while Arizona is in danger of playing itself out of it. How are we playing this game with our free MLB pick?

Sunday’s MLB betting odds opened Arizona and Clarke at around -135 over San Francisco and Cueto, with an over/under of 9.5 runs. Both those figures were holding steady in the early betting action.

Arizona could also be found getting upwards of +150, giving the run and a half on the MLB run line.

Arizona took the opener of this series Friday 7-4, snapping a nine-game losing skid. San Francisco then bounced back to take Saturday’s game 5-2. The Diamondbacks won as -185 favorites on the MLB betting odds Friday while the Giants won as +140 underdogs Saturday.

Saturday’s win snapped a three-game losing skid for San Francisco. But before that, the Giants won seven games in a row.

At 16-19 overall, the Giants trail the Mets, Brewers, and Cardinals by a half-game in the battle for the eighth and final National League playoff spot.

At 14-20, the Diamondbacks are two games out of that last playoff spot.

San Francisco leads the season series with Arizona four games to one.

Clarke is making his second start of this season Sunday, to go along with six relief appearances. In his first start, Monday against Colorado, he gave up two runs – one earned – on four hits through four innings of a 3-2 Arizona loss. And over his last five appearances, Clarke has allowed two ER and eight hits through 12 2/3 innings, although he also walked eight over that span.

Last year, in three starts against San Francisco, Clarke got clipped for 11 ER on 17 hits and six walks through 11 total innings. The Diamondbacks lost two of those three games.

Cueto is just 1/7 on quality starts this season. Tuesday against the Dodgers, he gave up six runs and eight hits through only four innings, although the Giants won that game 10-8. But in his two starts previous to that, he held Oakland and the Angels to four runs through 12 2/3 innings.

Cueto’s last start against Arizona came back in 2018, and that’s already kind of a long time ago.

San Francisco is batting .254 against right-handed pitching this season, with a .317 team OBP and a .410 team slugging percentage.

We also expect a bounce-back effort from Cueto, and we give the Giants short edges in the splits with the sticks and in the bullpen comparison. So we like San Francisco at the underdog price for our free MLB pick for Sunday. Bet your MLB picks FREE this week by depositing $500 and getting $250 FREE (real cash bonus) at one of the web’s oldest and most trusted baseball betting websites: Bovada!