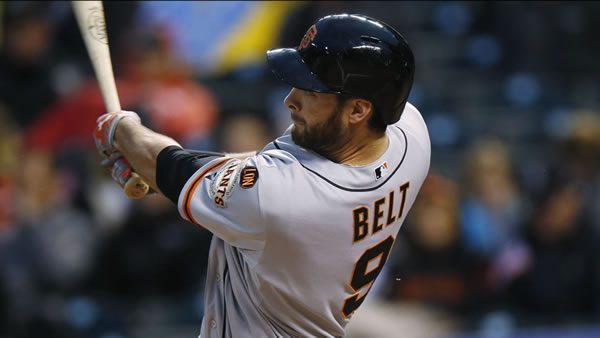 Foot On the Gas

San Francisco has become the first team to clinch a playoff berth, in large part because the Giants are now riding an eight-game winning streak and have gotten the wins they needed most. When the Giants began their meteoric rise to the top of the NL West, the expectation was always that they would collapse at the end and fall short of the Dodgers, simply because they weren’t ever expected to be in this position.

But with just 18 games left in the schedule, it’s become crystal clear that the Giants’ fade simply isn’t coming. San Francisco is now a legitimate contender to win the NL West as well as the World Series, and one of the biggest reasons is that they just keep finding a way to win. The Giants are second in the NL in runs scored to only the Dodgers and rank second in the NL in run prevention (again to the Dodgers). With Los Angeles still breathing down San Francisco’s necks, don’t expect any letup from the Giants; they’ve come too far to come up short now.

Last Gasps of a Career

Jake Arrieta’s final act reads a lot like an NFL player who just doesn’t know when it’s time to hang it up. I was wrong about Jon Lester being at the end of the line (considering that’s 2/5 of the Cubs’ staff in the 2016 World Series, it makes a lot of sense why the Cubs’ window officially shut this year, but that’s another story), but there is just nothing that suggests that Arrieta has anything left in his arm.
An ERA over 7 just isn’t anywhere near good enough to get the job done, and he’s shown nothing to suggest that anything is going to get any better over the rest of this season. Plus, every time his team has sent him out to the mound, it’s been an automatic L in the standings as of late. The last time Arrieta was on the winning team in a game where he pitched was June 9…and the opponent was San Diego, the team that currently employs him. The last time he beat a team that’s not a current employer was May 25 against Pittsburgh. Since then, it’s been 13 trips to the mound and 12 losses for the team he’s playing for at the time of the game, and given how well the Giants hit in the series opener, it’s a good idea to expect more of the same. Arrieta has had a fine career, but at age 35, there’s nothing left.

While Arrieta has been consistently bad in 2021, Anthony DeSclafani has been a lot less consistent. He has shown signs of running out of gas, but that might have been nothing more than a July swoon that he’s managed to pitch through over the past few weeks. The key for him now is to establish some measure of consistency, as he’s struggled to put more than one solid game together.

In his past five starts, he’s had two starts that were acceptable, as he held opponents to two runs or less. But he’s also seen two where he got knocked out of the game before the fifth inning and one where he could only go for four outs before getting pulled. That’s not going to get it done when the Giants get into the postseason, and a more consistent performance is a must if San Francisco is going to survive a short series with the Dodgers. The one thing bettors have been able to count on lately is the San Francisco bullpen, as the under is 3-0-1 in DeSclafani’s past four starts.

Summer in San Francisco means cool temperatures, as this one will kick off at 60 degrees on a clear night. Wind could affect things, as it blows out to left-center at 10 miles per hour.

San Diego just isn’t getting the job done, and there is no way I am going to trust a finished Jake Arrieta in this spot against a red-hot Giants team. San Francisco isn’t going to relax here just because they’re in the postseason; they’re going to keep the pressure on the Dodgers. Give me the Giants on the runline. Where are you doing your baseball betting? Does your book offer reduced odds? The MLB season is LONG and betting on games at a discount will save you hundreds (if not thousands) of dollars over the course of the season! Find this killer offer at BetAnySports!