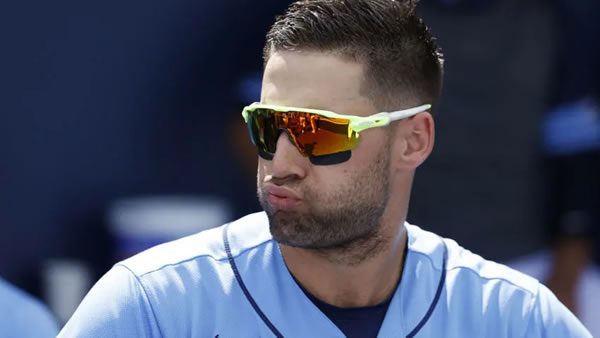 Heading into today’s game, New York will be looking to tack on another win after taking down the Tampa Bay by the score of 2-0. On their way to the victory, the pitching staff gave up 0 runs on 2 hits. On offense, New York’s lineup put together a total of 6 hits, leading to 2 runs. New York picked up the win, despite getting 124.0 on the moneyline. l Together, the Yankees and Tampa Bay stayed below the OU line set at 7.0 runs. With this result, New York’s over-under record dropped even further, moving to just 21-25-0.

The Rays will look to get back on track after dropping their last game by a score of 2-0 to the Yankees. Even in the loss, the pitching staff allowed just 2 runs on 6 hits. The Rays’ offense ended the game with just 0 runs on 2 hits. Tampa Bay dropped the game despite being favored at -134.0. For the season, the team has been favored in 34 games, winning at a rate of 62.0%. Combined, the Ray’s and the Yankees’ run total fell below the OU line of 7.0 runs. Now, Tampa Bay had an over-under record of 20-22-3.

In their last 5 contests, Rays have just 2 wins, going 2-3. This recent slump is backed by a scoring margin of -3 over their last 5 games. Even with their recent struggles, the offense has been steady, averaging 3.4 runs per game. This is right in line with their season average of 4.24. On the season, Tampa Bay has won more than half of their series, going 9-6-0.

The New York Yankees will send Gerrit Cole to the mound with an overall record of 4-1. To date, Cole has an ERA of 3.31 while lasting an average of 5.69 innings per appearance. Through 9 outings, opposing teams have combined for a batting average of 0.213. Cole is giving up home runs at a rate similar to the league average, allowing 1.05 per 9 innings. In terms of strikeouts, Gerrit Cole has a strong strikeout percentage of 28.99%, including a per game average 6.88. Throughout the season, Cole has avoided walking batters, allowing just 2.09 per contest.

The Tampa Bay Rays will send Corey Kluber to the mound with an overall record of 1-2. To date, Kluber has an ERA of 4.42 while lasting an average of 4.78 innings per appearance. Opposing teams have hit the ball well against the right-hander, with a batting average of 0.275. Home runs have been an issue for Kluber, as he is allowing an average of 1.18 per 9 innings pitched. Up to this point, Kluber has a strikeout percentage of just 22.0% and a per game average of 4.625. Throughout the season, Kluber has avoided walking batters, allowing just 1.86 per contest.

For the season, New York Yankees and Tampa Bay Rays will be playing their 2nd game of the season. So far, New York is leading the season series, 2-0. The over-under record in this series sits at 1-1. The average run total in these games is 7.79 runs per game. In these matchups, the average scoring differential sits at 3.5 runs. Dating back to last season, the Tampa Bay picked up 11 wins compared to 8, taking the season series. In these 19 meetings, the two teams combined for an over-under record of 9-10. Last year, the Yankees and Rays averaged 7.79 runs per game. The average scoring differential in this series was 4.0 runs per game.

In today’s AL East matchup between New York and Tampa Bay, look for the Yankees to pick up a decisive win. On the season, New York has hit the 6th most home runs vs right-handed pitching. I expect the Yankees to have a good night at the plate of Corey Kluber. I recommend New York on the moneyline.

Free MLB Pick: Yankees Moneyline. Bet your baseball picks for FREE this week by taking advantage of a 100% real cash bonus up to $500 when you use bonus code PREDICTEM at Betnow Sportsbook!