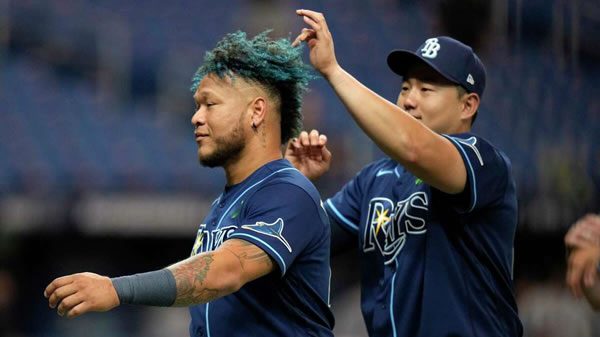 The Tampa Bay Rays host the New York Yankees on Thursday, May 26th at Tropicana Field. The first pitch in this matchup is scheduled for 06:40 ET. The MLB Odds Board places New York as the favorite (-130), with an OU line set at 7.5.

In their most recent game, New York picked up a 2 run win over Baltimore (2-0). Overall, the team’s pitching staff limited Baltimore to 0 runs on 5 hits. On offense, New York’s lineup put together a total of 6 hits, leading to 2 runs. In the matchup, New York was favored at -162.0 on the moneyline. Through 42 games as the favorite, the team has found the win column at a rate of 69.0%. Combined, the Yankees and Baltimore fell short of the over-under betting line of 7.5 runs. This outcome pushed New York’s over-under record further below .500 at 20-24-0.

After their 5 most recent games, the Yankees have gone just 2-3. This mark has come on an average run margin of just -6. On offense, New York’s offense has experienced a dip in production, averaging 2.8 runs per game over their last 5 contests. So far, New York has won over half of their 14 series played, going 11-2-1.

The Rays will look to add another win, as in their last game, they defeated the Marlins by a score of 5-4. For the game, the pitching staff held the Marlins to 4 runs on 9 hits. At the plate, the Rays scored 5 times on 6 hits. Tampa Bay picked up the win while being favored at -180.0. For the season, the team has been favored in 33 games, winning at a rate of 64.0%. The Rays and Marlins went over the run total line set at 7.0 runs. So far, Tampa Bay has an over-under record of just 19-21-3.

Across their last 5 contests, the Rays are above .500, going 3-2. During this time, the team’s run differential sits at 7. Tampa Bay is still playing winning baseball, even with their offense averaging just 5.4 runs per game, compared to a season-long mark of 4.40. On the season, Tampa Bay has won more than half of their series, going 9-5-0.

New York will roll with Nestor Cortes (3-1) as their starter. Currently, Cortes has a strong ERA of just 1.8 while pitching an average of 5.62 innings per outing. Hits have been hard to come by against the left-hander, as his batting average allowed is just 0.18. Cortes is giving up home runs at a rate similar to the league average, allowing 0.8 per 9 innings. On the season, Nestor Cortes has had no problem racking up strikeouts, posting a strikeout percentage of 32.0% while averaging 7.0 K’s per game. Leading into the game, he has shown a strong command of his pitches, averaging just 2.2 walks per contest.

For the Rays, starting pitcher Ryan Yarbrough has yet to factor into a decision. To date, Yarbrough has an ERA of 4.2 while lasting an average of 3.75 innings per appearance. Teams have been able to rack up runs against him, as he has a batting average allowed of 0.295. Opposing batters are hitting for power at a below-average rate against Yarbrough, as he is allowing just 0.6 per 9 innings. Up to this point, Yarbrough has a strikeout percentage of just 17.0% and a per game average of 3.0. Throughout the season, Yarbrough has avoided walking batters, allowing just 4.2 per contest.

Today’s matchup between the New York Yankees and Tampa Bay Rays will be their first meeting of the season. Dating back to last season, the Tampa Bay picked up 11 wins compared to 8, taking the season series. The average scoring margin in these games was 4.0, with an over under record of 9-10. Last year, the two teams combined to average 7.79 runs per game.

In today’s AL East matchup between the Yankees and Rays, I recommend taking New York on the moneyline. So far, the Yankees have only lost 2 games in starts made by Nestor Cortes, and in those outings, he has given up just 2 runs combined. Look for New York to pick up the road win.

Free MLB Pick: Yankees Moneyline. Bet your MLB picks for FREE this week by taking advantage of a 100% REAL CASH bonus on your first deposit of $100 to $300 at MyBookie Sportsbook! (Must use bonus code PREDICT100). Already have an account there but still want a 100% bonus? We’ve got a special deal where you can deposit $100 to $500 and get a 100% REAL CASH bonus at Betnow Sportsbook as well! (Must use bonus code PREDICTEM).