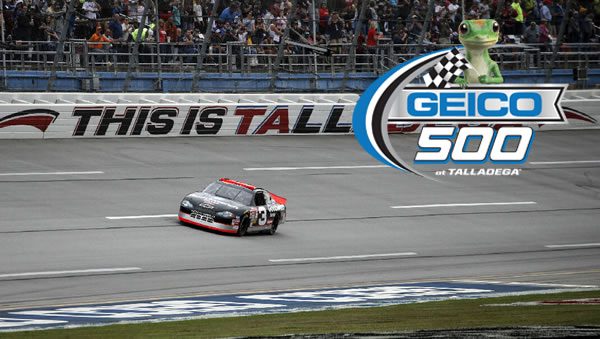 Have you ever seen the John Crist video about so many things
you’ll never hear at a NASCAR race? If not, it’s pretty funny. One of
them pertains to Kyle Busch being one of the nicest drivers. If you
didn’t know anything about NASCAR (or Kyle Busch), you might actually
hold some truth to that after seeing him take the win at Bristol. It’s
hilarious to me, and probably every other viewer, to see Kyle’s
attitude and personality change so drastically between a second-place
finish and a victory. Second place to Kyle is literally the first
loser. He pouts. He blames his team. He throws stuff. He does a lot of
things that are not very becoming of a good sport. On
the other hand, Busch is one of the nicest people you will see when he wins. His
face lights up. He is the ultimate family man, with Samantha and
Brexton often joining in victory lane. It’s pretty awesome to see. You
wouldn’t know he’s one of the most hated drivers across the circuit.
All in all, there’s no denying what a great driver Kyle is. The man is
one of the best of his time, if we’re being honest. But his attitude
leaves a lot to be desired.

Interestingly enough, Kyle didn’t really think he was going to win,
but after some last lap shenanigans that cost Tyler Reddick and Chase
Briscoe their shots at the win, Busch snuck past the spinning cars to
come away with the checkered flag. This was Busch’s 60th win and also
a win that tied him with Richard Petty’s record of 18 straight seasons
of at least one victory during the season. Something overshadowed even
Busch’s record-tying phenomenon, though. The actions between Tyler
Reddick and Chase Briscoe, after the race, speak volumes of both of
their characters. Those are some guys with integrity. Although Reddick
had the win basically stolen from him, there were no hard feelings.
Briscoe came to Reddick after the race to apologize for causing the
spin, but Reddick was more than understanding and chalked it up to
short track dirt racing. That’s exactly how it should be. Racing is
racing, and drivers need to come back to reality sometime and
understand that. Kyle Busch could actually take a few notes. Last lap
stuff happens. If you’re not rubbing on the last lap, then you’re not
racing hard enough.

This weekend, the drivers will have another shot but at a much
different track. The teams are moving on from the true roots of NASCAR
at a short dirt track to the superspeedway of Talladega. This asphalt
tri-oval is 2.66-miles with 33 degrees of banking in turns 1 and 2,
32.4 degrees in turn 3, 32.5 degrees in turn 4, 16.5 degrees through
the tri-oval, and a modest 3 degrees on the backstretch. Talladega is
much different than any short track. Consideration here lies strongly
on drafting and track position. Teams that are able to work together
and stay together are going to be the most successful. Even different
teams but the same manufacturer is something we often see. The key is
staying with the main draft. If a driver falls off the pace, getting
that track position back is next to impossible; however, the caveat is
that staying in the main draft always leaves a driver open to
catastrophe. Inevitably, there is a big wreck. There are few
exceptions, regardless of the type of car that we see brought to this
track. Although the drivers will be in the next-gen car, they will
still suffer the same outcomes. The key is being at the front and
staying there. Who will be able to do just that?

Brad Keselowski is the defending winner of this race from last year,
with Bubba Wallace winning a rain-shortened race later in the year.
Looking at the current state of affairs, I dare say that neither one
of these guys is going to be huge contenders as the day goes on. If
anything, Keselowski is going to be the best of those two choices. His
experience and previous wins at Talladega do give him a bit of an
advantage, but his season so far this year leaves much to be desired.
While he is going into the weekend as one of the favorites, I have a
hard time believing that he will be able to capitalize on momentum
planted last year. He has 4 wins at this track, so he will certainly
be one to watch, but I think that a new team and a new car are giving
him a lot to ponder right now. His old teammate, Joey Logano, is
someone I’d put in front of Keselowski for this week. Logano has been
much more consistent. He’s going into Talladega with better odds than
Keselowski as well. Bubba Wallace is at the top of the charts too, but
that’s a crapshoot at its finest. I wouldn’t put much credence in
Wallace being able to repeat his lucky win from last year. It’s
looking to be a strong weekend for the Penske garage. Let’s take a
look at your potential winners heading into Sunday’s race:

In his only 2 starts at Talladega, Briscoe has managed a respectable
14th and 11th place finish. While they aren’t the greatest finishes,
this year has been nothing but up for this driver. With almost coming
away with the win last weekend, Briscoe is on track to be a force to
be reckoned with no matter where he’s racing. This kid has it figured
out and is only getting better. Ryan Blaney has a couple of wins here
himself. He’s a driver that has Talladega pretty well figured out. As
part of the Penske team, it’s safe to say that he’s going to be part
of an elite group of drivers this weekend. Blaney will most definitely
have the help of his teammates and even that of Briscoe, as they are
all running Fords. Manufacturer loyalty is almost as strong as team
loyalty at Talladega and Daytona. Logano will be joining these guys, and I think that he is going to be the winner this weekend. He came up
just short at Bristol but still finished in the top 5. He has 3 wins
here and multiple top 5 and top 10 finishes on top of those wins.
Although his last few races haven’t been the greatest, they were all a
result of accidents. If Logano can stay out of trouble, he is sure to
have a very solid day at Talladega. Let’s take at where he is sitting
in the points after his solid finish at Bristol.

Kyle Busch was clearly the winner after last weekend by gaining his
first win of the season. We were all wondering if he was going to have
that comeback this year. That said, we’ll have to see if he can
capitalize or if he will fall flat after the win. With one of the
veterans taking the spotlight at Bristol, will Talladega continue the
trend, or will the young guys come back to disrupt the norm? With so
much success this year from the younger drivers, it wouldn’t surprise
me if they managed to fool us all and swipe the win from a veteran.
We’ll have to see how it all plays out. Stay tuned for a great
afternoon of racing at Talladega!