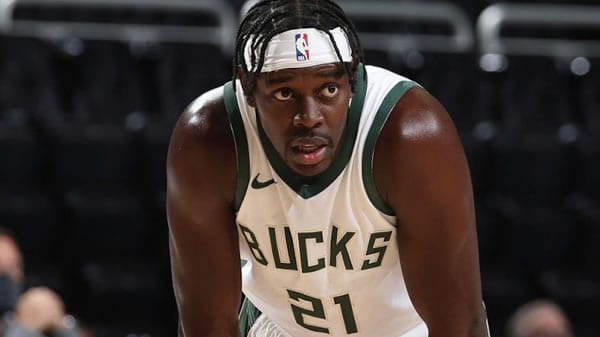 After taking the opener of this NBA championship series Tuesday night, the Phoenix Suns shoot for a 2-0 lead when the teams meet for Game 2 Thursday night in Phoenix. Milwaukee star Giannis Antetokounmpo was listed as questionable for Game 1 with a knee injury, then played but not all that effectively. And unfortunately, his effort didn’t do his team and those who bet on them any good. Phoenix opened this NBA Finals series as -185 favorites to win it, with the Bucks getting +165 as the underdogs. Now Phoenix is chalked at -355 to the championship, with Milwaukee getting +275. Here’s our homework on Game 2, with our free NBA pick.

The NBA playoffs betting market opened Phoenix as a 5.5-point favorite for Game 2, with an over/under of right around 221. Early betting action then dipped that total to 219.5.

As of Thursday morning, the best Game 2 money line we could find on the Suns was the -215 offered at
BetOnline, while the Bucks were getting +185 at GTBets to win this game outright.

Phoenix took Game 1 of this NBA Finals Tuesday night 118-105. The Suns trailed that game early 20-18 but led 57-49 at the half. Phoenix extended its advantage to 88-68 late in the third quarter, let Milwaukee get within 101-94 with seven minutes left but held on from there for the victory and the cover as a five-point favorite.

On the night, the Suns shot 47 percent from the floor, the Bucks 46 percent. Also, while Phoenix won the turnover battle 14-9, Milwaukee won the battle on the boards 47-43. But the Suns shot ten more free-throws than the Bucks and made almost every one of them while Milwaukee struggled, creating a +16 points differential for Phoenix at the line.

The big question going into this series was the availability of Antetokounmpo after he injured a knee in the Eastern Conference finals against Atlanta. The Freak missed Games 5 and 6 of that series, but Milwaukee won those games anyway. It’s hard to believe the Bucks are a better team without Antetokounmpo, but that’s the way it looked for those two games. Then he comes back, and Milwaukee loses, although we should point out Phoenix might be the best team in the League.

The Freak isn’t even listed on the injury report for Game 2, but our guess is he still isn’t 100 percent.

The Suns played five games better than the Bucks during the regular season, 51-21 to 46-26, and swept the season series from Milwaukee two games to none. But both those games were decided by exactly one point, and both games combined came out almost dead-even statistically.

Unders are 10-7 in Bucks games this postseason.

Unders are 9-7 in Suns games this postseason.

Overs are 3-0 in Bucks-Suns games this season, which are averaging 235 total points (without overtime) against an average over/under of 227.

Phoenix is the better team here and our pick to win this championship series, even with a healthy Antetokounmpo. However, these two teams played a pair of very close games during the regular season, and we won’t be surprised if this one plays close, too. Also, we just expect a better performance from Milwaukee Thursday night after looking a little off Tuesday night. Again, as we said for Game 1, we’re not sure the Bucks will win this game outright, but we’re betting them plus the points for our free NBA Finals pick for Game 2. Not sure who you like? Sometimes it’s best to wait until the game starts, assess for a bit and THEN jump in using a live betting feature. The absolute BEST live wagering platform on the web can be found at Bovada Sportsbook. They can get credit cards to work for depositing, they offer a 50% signup bonus up to $250 FREE and rebates on ALL your bets; win, lose or draw! Click here to check them out!