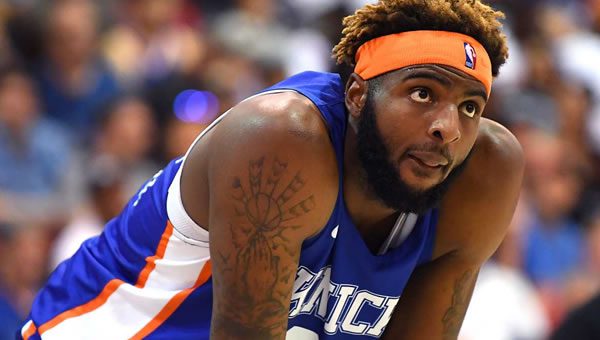 Heading into the game, Cleveland is 15-8 overall. When taking to the road, Cleveland has a mark of 5-7 and a win percentage of 42.0%. Currently, the team is 3rd in the Eastern Conference. So far, they are 14-8-1 vs. the spread. In their matchup against New York, the Cleveland Cavaliers have won 2 straight games and will look to push that mark to 3 in a row.

In their last game, Cleveland defeated Magic (107-96) as 10-point favorites. Donovan Mitchell led the team with 34 on 57.1% shooting. The Cavaliers also covered the spread with the victory.

Heading into the game, New York is 10-13 overall. When playing at home, New York has a mark of 4-7 and a win percentage of 36%. Currently, the team is 11th in the Eastern Conference. So far, they are 9-13-1 vs. the spread. The Knicks need a win in today’s matchup vs. Cleveland to avoid their 3rd straight loss.

Most recently, New York lost to Mavericks by a score of 121-100. Julius Randle and his 24 points were not enough for the team to pull out a win as 1-point underdogs. The Knicks also finished with an ATS loss in the game.

In the most recent matchup between the two teams, the Cavaliers picked up the 121-108 win over the Knicks. The Cavaliers’ point margin of victory was enough to cover the spread as 4.0 point favorite. This has been the only matchup between the two teams this season. Across the previous five meetings between the teams, the Cavaliers have an average scoring margin of +6 points per game, leading to an ATS mark of 3-2. Cleveland and New York averaged a combined 210 points per game in these games, leading to an over-under mark of 2-2-1.

This season, the Cavaliers’ offense is averaging 112.7 points per game, which is 15th in the NBA. In terms of pace, Cleveland has been playing at one of the slower tempo’s in the league, averaging just 97.0 possessions per game. Cleveland’s 3-point shooting numbers are below the league average, as they have hit just 38.5% of their looks from deep. On average, the team gets up 32 3-point shots per game, placing them 19th in the NBA. Defensively, the Cavaliers have been one of the best units in the NBA, allowing just 105.67 points per game. So far, they have allowed a 3-point shooting percentage of 35.29%, placing them 16th in the NBA.

The Cavaliers scoring leader is Donovan Mitchell, at 28.7 points per contest, good for 9th in the entire league. Behind him, Darius Garland is contributing a solid 22.5 points per game as the team’s second-leading scorer.

This season, New York is among the league leaders in scoring, averaging 114.6 points per game. So far, the Knicks are also one of the more up-tempo teams in the league, sitting at 100.6 possessions per game. The Knicks have been able to put together a strong offensive attack despite sitting just 30th in 3-point shooting percentage. Overall, they are among the league leaders in attempts at 34.3 attempts per game. Defensively, the Knicks have been one of the best units in the NBA, allowing just 106.6 points per game. So far, they have done an excellent job defending the 3-point arc, allowing teams to hit just 34.2%.

Julius Randle comes into the game as the Knick’s leading scorer at 21.3 points per game. Second on the team is Jalen Brunson, who is also dishing out 6.4 assists for the unit.

The Cavs have a promising young team but have lost six of their last seven road games. The Knicks provide a formidable opponent tonight and are a live-barking-dog! Take the points with the underdog Knickerbockers!