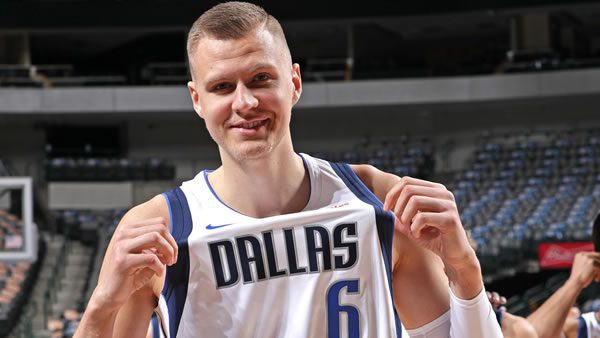 The Dallas Mavericks come into this game with a 27-20 record and sit 5th in the Western Conference. The Mavericks come in winners of five of their last six games and are slowly but surely making ground on the top teams in the West. Last time on the floor, Dallas downed a hot Grizzlies team in a 104-91 final. The foundation of this team this season has been their defense, which they will once again need against a highly talented Warriors team. The two areas that the Mavericks excel at are two areas that will be their rise or fall in this game. First, Dallas is 2nd in the league at allowing offensive rebounds. Minimizing extra opportunities for a team that is deadly from range could lead to the game getting away from them early. The other area of their defense, which will be the focal point of this game, is allowing just 33.6% from three-point range, a 6th best mark in the NBA. Against the Warriors, who have the best shooter of all-time and Klay Thompson, who you could also add to that conversation, taking away their three-point offense would be a huge win for the Mavericks. The Warriors are also still without Draymond Green, so if the shots from range aren’t falling, they won’t have the size they usually do in the paint to pick up the slack. The Mavericks are led in scoring by Luka Doncic, who is averaging 25.6 PPG this season. As a team, the Mavericks are the 25th scoring offense as they average 105.3 PPG. Their defense, however, is what has got them this far, currently sitting 3rd in scoring defense, allowing just 102.5 PPG.

The Golden State Warriors head into this matchup with a 34-13 record and are 2nd in the Western Conference standings. Through the first few months of the season, the Warriors seemed almost invincible, holding the top spot both on offense and defense before dropping in both categories and having a tough month of December. After a slow start to January, the Warriors seem to be finding their groove again as they come in winners of two straight and three of their last four. While not still back to 100% offensively, their defense hasn’t faltered as they’ve allowed just 100.5 PPG in their last four contests. Taking on the Mavericks, who will be a good defensive test, there are two areas of their own defense that give them an edge despite another possible lackluster offensive outing. First is their opposing shooting percentage, which is 42.7% and is currently best in the league. The other, which is a similar high point of the Mavericks, is their ability to defend the perimeter. The Warriors allow 32.9% from three-point range, which is 2nd best in the NBA. Being that Dallas is in the Top 10 for attempted threes in a game, shutting down their efficiency from range is going to be a point of emphasis in this game. The Warriors are led in scoring by Steph Curry, who is averaging 26.0 PPG this season. After being among the top teams for the first few months, the Warriors have fallen to the 13th best scoring offense, averaging 109.4 PPG. Defensively, they’ve managed to hold onto the number one spot, giving up just 101.9 PPG.

Mavericks on the Road

The Dallas Mavericks sit above .500 on the road this season with a 12-11 record. After being home for a stretch of five games, the Mavericks start their road trip in San Francisco tonight and will be on the road for three of their next four. Against the spread, Dallas holds a 13-10 record on the road and has fared well recently as underdogs. The Mavericks are 4-1 ATS in their last five games as underdogs and play well against some of the top teams in the league. In fact, in their last six games, they are 5-1 ATS against teams with a record above .600%. Going into Golden State against a team that has only dropped four of their twenty-five home games has proven to be a tough place to win, and with just a 3.5-point spread, to cover would put them in the driver seat to win as well. If this was the Warriors team from earlier this month, I might lean the way of the Mavericks, but the Warriors are starting to sort out their miscues and come in as the better team on both ends of the court.

The Warriors come into this game with an impressive 21-4 home record, which is the best in the NBA. In the most recent game of their homestand, the Warriors had a remarkable defensive effort against the top offense in the Jazz, allowing just 92 points on the night. As the wins have been plentiful at home, their ability to cover the spread is not far behind. The Warriors are 15-8-1 ATS at home, though recently, they’ve struggled to make bettors happy. Golden State is 1-4-1 ATS in their last six games as favorites, four of which were at home. Coming into this one as 3.5-point favorites is a much more manageable margin to cover compared to most of their double-digit margins at home. The Warriors are the more talented team in this game, both statistically and physically, so I expect the Warriors to break their streak in this one with another stellar defensive effort.

Tuesday night will be the second time these teams meet this season. Just 20 days ago, the first matchup ended with the Mavericks on top in a 99-82 final. Looking back at recent seasons, the Mavericks have had the Warriors’ number, winning seven of the last eight matchups, including a current three-game win streak.

How the Public is Betting the Mavericks vs. Warriors

62% are betting the Warriors against the spread.
56% are wagering on the game to go under the posted total of 211.5.

This Western Conference matchup is between two teams that have heavily relied on their defense this season. Though the Mavericks come in riding an impressive stretch of basketball, they may have met their maker in the Warriors. Both teams rely heavily on the three-point ball, though one team shoots it better and defends it better, and that’s the Warriors. The Warriors’ offense is starting to come out of their slump and beat good teams again and will be too much for the Mavericks in both phases of the game in this one. Take the Golden State Warriors to cover the 3.5-point spread.