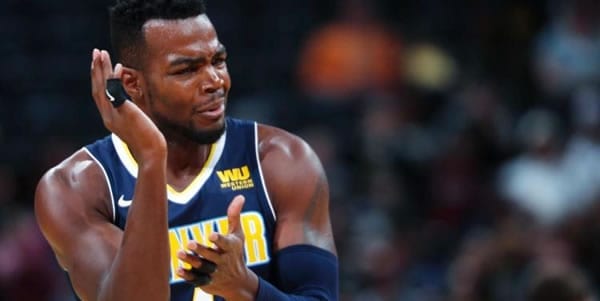 For the first time this series, the Nuggets looked like a dominant force. They were in control the entire game and now will have the chance to officially punch their ticket to the Western Conference Finals. Of course, fatigue will play an important factor, so as always, the rest advantages will be in play.

Once again, each team will receive just one day of rest to travel and prepare for this possible elimination game. The Nuggets are now 35-28 straight up and 29-34 against the spread when one rest day is given. The Trail Blazers are 42-19 straight up and 34-27 against the spread in the same scenario. I know that Denver destroyed Portland just the other day, but I do not see Portland shooting as poorly as they did in this past game. For that reason, I will lean towards Portland to tie up the series.

The Nuggets played a near perfect game last time out. Just to give a few stats, the Nuggets shot 44 of 89 from the field or 49.4%. Four of their five starters scored in double figures and they dominated the Trail Blazers in the paint 66 to 46. Having said all that, this game was still in Denver where the Nuggets are 39-9 overall this season. Compare this to their road record of 22-24 and that is why it will take another near perfect effort to win away from home. Now there is one specific player who I believe can make a real difference for the Blazers.

Saying that Jokic is the key to this game would be too easy, which is why I believe the X-factor to a Nuggets close out win is Paul Millsap. First, Millsap is veteran player and has been in these situations before. Before the game even starts, Millsap can be the leader the Nuggets need to help prepare them for the task at hand. Secondly, Millsap has been a great second option inside the paint to his teammate, Nikola Jokic. Millsap is averaging 19 points per game this series and shooting 36 of 53 from the field or 67.9%. After taking a closer look at his stat line, I found that when Millsap hits the 19-point mark or higher, the Nuggets win the game. For example, Millsap scored 14 points in game two and 17 in game three, and almost single handedly gave us the win. These were both losses for Denver, so Millsap’s ability to score will be crucial to the Nuggets offense.

Remember when Portland won that marathon game and went up in the series 2-1? Yeah that lead evaporated faster than the winning ticket on Maximum Security and now the Blazers find themselves in a deep hole. But do they really have what is takes to win this game at home where they have been so dominant?

My quick answer to this question is yes, and I have a few reasons why I believe Portland can force a game seven. This game will start with the play of both Damien Lillard and CJ McCollum. Not one of them, but both. We saw what happens when these guys struggled, so their performance will be the focal point in this must win game. A quick look at the stats and we see that Lillard and McCollum combined for 34 points on 14 of 37 from the field in game five. Their combined 34 points was only 34.7% of the team’s total points. Even if both guys go off for 20+, that still leaves the question of, “Where will the rest of the points come from?”

Specifically, I want to mention Ennis Kanter because he will be tasked with shuting down Jokic. Ever since Portland took a 2-1 series lead, Kanter has been lifeless in this series. Through the first three games, he was averaging 19.7 points per game, but in the last two games he is averaging 6.0 points per game. I am still wondering how he went from good to bad in a matter of days, but nonetheless, his presence in the paint will play a huge role for the Trail Blazers. They cannot afford Jokic and Millsap crushing them in the low post so look for Kanter to take one of the options away. I mean Kanter has already shown he can defend Jokic, when he held the star center to 17 in game two. Since then Kanter has been bullied and will need to fix this issue fast unless they would rather watch the Conference Finals from the comfort of their own home.

I really do not see the Trail Blazers playing as bad as they did in game five. Lillard and McCollum will not go down without a fight, which is why I like the Trail Blazers to extend this series. The Nuggets are 1-1 in elimination games in this years’ playoffs, while the Trail Blazers are 1-0. Albeit, the Blazers were the ones who did the eliminating in the first round, but still they played very well under pressure and I like Mybookie’s current -4 line and I like them to win and cover in this spot.