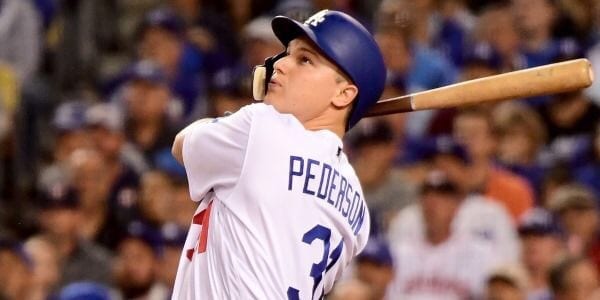 The Dodgers are hot while the Nationals are on the fade heading into the opener of this four-game series at Chavez Ravine Thursday night. Who do we like here for our free MLB pick?

Thursday’s MLB betting odds opened LA and Hill at around -135 over Washington and Corbin, with an over/under of 7.5 runs. Early betting action then bumped that line to -140 and dipped that total to 7.

The Dodgers could also be found getting upwards of +150 giving the run and a half on the MLB run line.

Washington just got swept three games in Milwaukee, losing Wednesday’s series finale 7-3. Just before that the Nationals lost two of three at Philadelphia, and just before that they dropped three of four at home to St. Louis.

So Washington is 0-6 over its last six series, 0-4 over its last four games and 5-14 over its last 19. At 14-22 overall the Nationals sit in fourth place in the NL East, seven games behind first-place Philadelphia.

So LA is 3-1 over its last four series and 10-3 over its last 13 games. At 25-14 overall the Dodgers lead the NL West by three games over second-place Arizona.

This series is the first meeting between these teams this season. Last year Los Angeles took the season series from Washington five games to one.

Lefty Hill is one-for-two on quality starts this season. Last Saturday he gave up three runs and seven hits, including a couple of homers, through four innings against the Padres, although the Dodgers won that game 7-6. And in his season debut 11 days ago Hill gave up five runs in six innings of another 7-6 Los Angeles victory, but only one of those runs was earned.

So through his first two starts of this season Hill allowed four ER and 12 hits, including four dingers, through 10 innings. Thanks to some good run support the Dodgers won both those games.

This will be (basically) Hill’s first start against the Nationals since 2017, and that’s already a long time ago when it comes to this Washington lineup.

Fellow southpaw Corbin, by our tough standards, is 4/7 on quality starts this season, but 0 for his last two. Last Saturday he gave up three runs on six hits and three walks through six innings, although Washington managed to win that game 10-8. And just before that he gave up six runs in five innings of a 6-3 Nationals loss to St. Louis.

On the season Washington is 4-3 with Corbin.

In four starts last year against the Dodgers while still with the Diamondbacks Corbin allowed just two runs and 10 hits through 23 1/3 innings, with 31 strikeouts. Unfortunately, thanks to poor run support the Nationals only won one of those four games.

Washington is batting .281/.348/.518 against left-handed pitching this season. But this lineup has been held to three runs or less in 11 of its last 13 games.

Corbin was really tough on Los Angeles last year so Washington owns the advantage in this pitching match-up. But the Nationals are having a tough time scoring runs and their bullpen is terrible. In fact, Corbin’s recent track record against LA helps keep the line on this game more amenable toward the Dodgers. We’re going with the hot team here over the cold team, and betting Los Angeles.