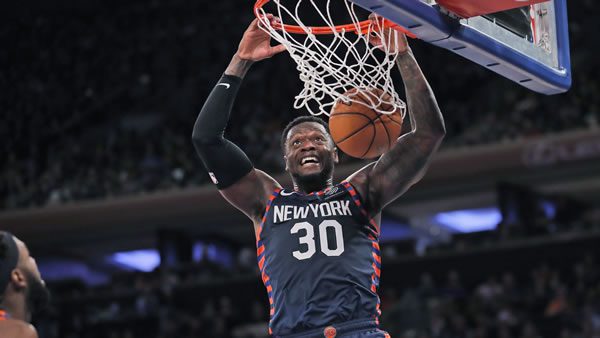 Point Spread: ATL +2/ NY -2 (If you tease your basketball bets, you need to check out the MASSIVE NBA teasers that Wagerweb Sportsbook offers! HUGE!)

Atlanta most recently lost to the Thunder by a score of 121-114. The team high 24 points from Dejounte Murray were not enough to come away with the win. The Hawks were 6-point favorites going into the game.

In the most recent matchup between the two teams, the Hawks picked up the 112-99 win over the Knicks. Heading into the game, Atlanta was the 2.5-point underdogs, giving them an ATS win.

This season, the Hawks have loved to get up and down the court, as they are currently 9th in the league in possessions per game. However, this has not fully translated into the offensive success they are looking for, as Atlanta is 13th in scoring at 114.0 points per game. Atlanta has struggled with their 3-point shot this season, as they are currently ranked just 26th in 3-point shooting percentage at 32.7%. In addition, they are near the bottom of the league in attempts, at just 29.9 attempts per contest. Defense has been a struggle for Atlanta, as they are currently just 112.38 in points per game allowed. The team’s 3-point shooting defense has been a problem this year. So far, opposing offenses have hit 36.43% of their looks from the outside.

Coming into today’s game, Trae Young is the leading scorer for Atlanta at 27.6 points per game. This season, Young has a field goal percentage of 40.8%. The team’s second-leading scorer is Dejounte Murray, at 21.5 points per contest.

This season, the Knicks have loved to get up and down the court, as they are currently 11th in the league in possessions per game. However, this has not fully translated into the offensive success they are looking for, as New York is 14th in scoring at 113.6 points per game. The Knicks have been able to put together a strong offensive attack despite sitting just 30th in 3-point shooting percentage. Overall, they are among the league leaders in attempts at 34.0 attempts per game. Defensively, the Knicks have been one of the best units in the NBA, allowing just 106.6 points per game. So far, they have done an excellent job defending the 3-point arc, allowing teams to hit just 34.2%.

Coming into today’s game, Julius Randle is the leading scorer for New York at 21.1 points per game. This season, Randle has a field goal percentage of 46.1%. The team’s second-leading scorer is Jalen Brunson, at 21.0 points per contest.

More Picks: Get our Golden State at Utah predicted point spread winner for 12/7/22

New York is really struggling to score more than 100 points over their last three games. Atlanta has lost four of their last six games but put the ball in the bucket at a higher rate as of late. I believe the Atlanta Hawks will win straight up tonight! Bet your NBA predictions for FREE this week AND get a FREE HALF POINT everytime you bet your favorite team! Simply use promo code PREDICTEM on your first deposit of $100 to $500 at GTBets Sportsbook! They offer a sweet loyalty program too!