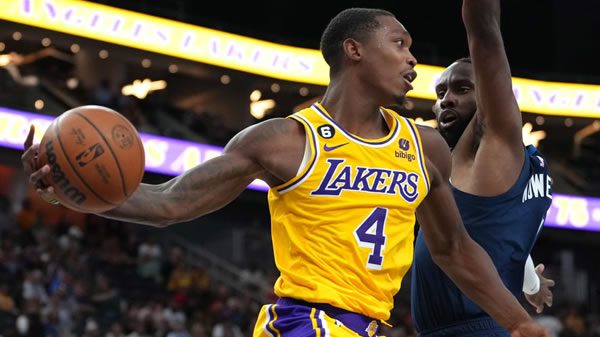 Utah will be gunning to get in the win column vs the Lakers, as they previously lost to the
Mavericks by a score of 103-100. However, because they entered as 6-point underdogs, they came
away with an ATS win. Utah let an opportunity for a win slip away as they held the lead going
into the 2nd half of action. Leading the team in scoring was Jordan Clarkson, as he contributed
22 points while hitting 45.0% of his shots.

The Lakers come into today’s matchup with an overall record of 2-5. So far, the team has gone
2-5-0 against the spread. Against the Jazz, the Lakers are looking to add to their current 2
game-winning streak. The average margin of victory across these matchups is 7.0.

Los Angeles is going for yet another win, as they previously defeated the Pelicans at home.
With the 120-117 victory, they also covered the spread as 3-point underdogs. Although Los Angeles
ended up winning the game, they allowed the Pelicans to make things interesting down the stretch.
Heading into the second half, the team led by 12 points before squeaking out a 3-point win. In
the win, Lonnie Walker IV led the team in scoring with 28 points on a field goal percentage of
52.9%.

Last season, the Lakers not only won their season series against the Jazz (2-1), but they also
took care of business at home, going 2-0 at the Crypto.com Arena. Last year, the Jazz saw a drop
in overall scoring when playing the Lakers, averaging 106.0 points per game. Like the Jazz, the
Lakers scored at a rate below their season average, finishing with 105.33 points per game vs.
Utah. Spanning across the last 5 head-to-head matchups, the Jazz and Lakers have been
competitive, with an even scoring differential. This has resulted in a 4-1 ATS record for Los
Angeles. Utah and Los Angeles averaged a combined 216 points per game in these games, leading to
an over-under mark of 2-3.

Heading into play, the Jazz offense is rated 10th in the league in scoring. So far, Utah is
averaging 101.9 possessions per game, making them one of the more up-tempo teams in the league.
Although the team is playing at an up-tempo speed, they would benefit from scoring with more
efficiency, as they are just 20th in the league in overall field goal percentage, at 54.0%.

So far, the Jazz have played well defensively, as they are ranked 10th in the league at 107.57
points per contest.

Lauri Markkanen could be in line for a big game vs the Lakers, as they were one of the worst
units at defending power forwards in the 2021-2022 regular season.

The Lakers come into today’s game as the 28th ranked scoring offense at 107.4 points per game.
Coming into today’s game, the Lakers will be looking to improve their 3-point shooting numbers,
as they are averaging just 9.3 made 3’s per game. If the team is going to improve their scoring
numbers, they will need to become more efficient with their shots, as Los Angeles is already one
of the leaders in pace, averaging 105.0 possessions per game.

Defensively, Los Angeles has had its problems giving up an average of 115.15 points per game
(28th).

One thing to watch will be if LeBron James will be able to take advantage of his matchup vs
the Jazz. Last year, they were ranked just 18th in points allowed to small-forwards.

The Jazz are catching the Lakers at a really bad time, when they appear to be regrouping and
finding their groove. I think this game could potentially be a double-digit win for the Lakeshow,
so am stoked to only have to lay -2 here! Bet your NBA predictions for FREE today by taking advantage of a massive 125% real cash bonus up to $400 PLUS get a free half point everytime you bet your favorite team! Get these killer offers simply by entering bonus code PREDICTEM when you register and deposit at GTBets Sportsbook!