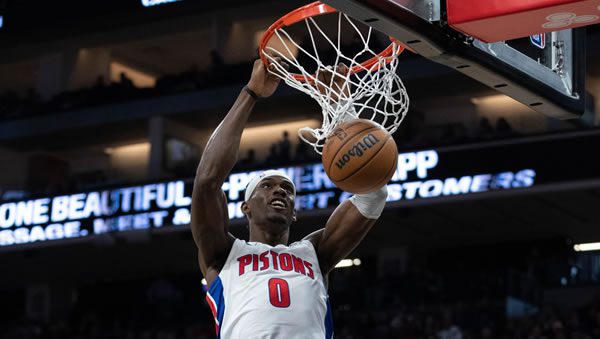 Point Spread: ORL -1.5/ DET -1 (Deposit $200 and get $100 FREE at the web’s best sportsbook! Find a HUGE wagering menu, the best live wagering platform on the web AND a killer player rewards program where you get a rebate on EVERY bet; win or lose at Bovada Sportsbook!)
Total: 228.5
Money Line: Orlando Magic -121/ -101

Orlando most recently lost to the Lakers by a score of 129-110. The team high 16 points from Markelle Fultz was not enough to come away with the win. The Magic were 3-point favorites going into the game.

Heading into the game, Detroit is 8-28 overall. When playing at home, Detroit has a mark of 4-13 and a win percentage of 24%. Currently, the team is 15th in the Eastern Conference. So far, they are 17-18-1 vs. the spread. The Pistons need a win in today’s matchup vs. Orlando to avoid their 7th straight loss.

Most recently, Detroit lost to the Clippers by a score of 142-131. Bojan Bogdanovic and his 23 were not enough for the team to pull out a win as 5-point underdogs. The Pistons also finished with an ATS loss in the game.

In the most recent matchup between the two teams, the Pistons picked up the 113-109 win over the Magic. The Pistons’ margin of victory was enough to cover the spread as a 3.5-point favorite. This has been the only matchup between the two teams this season. Across the previous five meetings between the teams, the Pistons have an average scoring margin of +3 points per game, leading to an ATS mark of 4-1. The over-under record in these same games is 4-1, with the teams combining for an average of 219 points per game.

This season, Orlando is averaging just 110.3 points per game, which places them 27th in the league. A major reason for these low numbers is the fact that they play at one of the slower paces in the NBA, at just 98.4 possessions per game. Orlando comes into the game ranked just 26th in 3-point attempts per game. So far, they have connected on 34.9% of their shots from deep, which places them 25th in the NBA. On defense, the Magic allow an average of 112.23 points per game, placing them 20th in the league. So far, teams have shot 36.62% on their looks from outside vs. Orlando. This figure places them 27th in 3-point shooting defense.

Going into today’s game, Franz Wagner is the leading scorer for the Orlando team, with an average of 19.7 points per game. This season, his field goal percentage is 47.9%. The team’s second top scorer is Paolo Banchero, who is averaging 21.1 points per game.

Coming into the game, Detroit’s offense is ranked just 24th in scoring at 111.2 points per game. This has come while being the 14th-ranked unit in pace. So far, the Pistons are averaging 99.9 possessions per contest. When looking at the team’s 3-point shooting numbers, they profile as an average team in both percentage and attempts. For the season, the Pistons’ offense is ranked 16th in 3-point attempts per game while connecting at a rate of 34.7%. The defense has not been a strength for Detroit, as they currently allow 112.55 points per game. The team’s 3-point shooting defense has been a problem this year. So far, opposing offenses have hit 36.41% of their looks from the outside.

Bojan Bogdanovic is the top scorer for the Pistons, with an average of 20.9 points per game. This season, his field goal percentage is 48.3%. Jaden Ivey is the team’s second-leading scorer, averaging 15.5 points per game.

Orlando is a much better team than Detroit at this point in the season. However, the Magic are in a REALLY bad spot here after losing last night and having to travel north for a back-to-back. I’m betting on the Pistons plus the point! Kick 2023 off right with free bowl game and Week 17 NFL bets! Deposit $100 to $300 and use promo code PREDICT100 and you’ll receive a massive 100% real cash bonus at MyBookie Sportsbook!