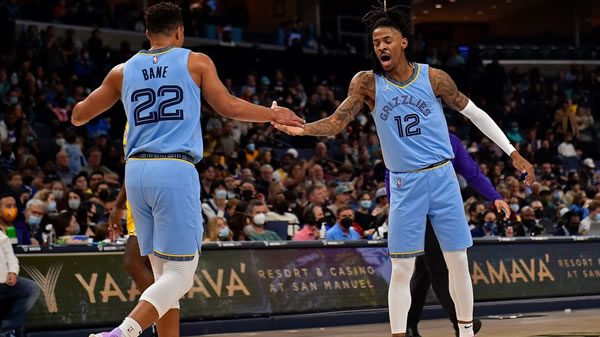 The Memphis Grizzlies come into this game with a 41-20 record and sit 3rd in the Western Conference. Despite picking up where they left off before the All-Star break with a loss on Thursday to the Timberwolves, the Grizzlies are having a good month of basketball, going 6-2 in their first eight games. While their offense has been steady throughout the season, their defense has been their downfall as of late and will be tested against the hot Chicago offense. Despite missing Lonzo Ball in recent weeks, the Bulls have been stellar from range, which is an area of concern for the Grizzlies. This season, Memphis allows 35.3% from three-point land, putting them 18th in the league. The Bulls knock down 37.5% from range, which is the second-best mark in the NBA. If the Grizzlies are unable to keep the Bulls at bay from range, it may compound with another area of the Memphis defense that has lacked this season, which is their ability to close out games. Memphis allows 27.2 points in the 4th quarter, which is 22nd in the league. As they face the best fourth-quarter team that averages 29.6 points in the fourth at home, any deficit going into the final twelve minutes could turn into a blowout in the end. The Memphis offense is led by Ja Morant, who is averaging 26.7 PPG this season. As a team, the Grizzlies are 2nd in the league as they average 113.8 PPG. On defense, they sit 14th, giving up 109.1 PPG, though they did give up 117.0 PPG over their last three games.

The Chicago Bulls come into this matchup with a 39-21 record and sit 2nd in the Eastern Conference. In their first game out of the All-Star break, the Bulls were able to edge out the Hawks in a 112-108 final to move their win streak to six games. Like the Grizzlies, the Bulls rely on their top 10 offense while being handicapped by a below-average defense. As mentioned above, the Bulls can expose the Grizzlies from range in this game, but there is another area of their offense that has been impressive this season: turnovers. Giving up an average of 13.0 turnovers a game, Chicago finds themselves 6th in that department in the NBA. They will need to rely on this good ball security once again as Memphis has an eye for the ball defensively as they force 15.2 turnovers a game, which is 5th best in the league. As this game is expected to be an offensive shootout with the lack of defense from each team, minimizing turnovers will be key to giving themselves the needed opportunities in a game that the odds suggest will come down to the wire. The Bulls offense is led by DeMar DeRozan, who has been a brief mention in this year’s MVP race as he averages 28.3 PPG this season. The Chicago offense finds themselves 7th as they average 112.6 PPG. Defensively, they are 17th as they allow 110.3 PPG.

Grizzlies on the Road

Memphis heads into Chicago with an impressive 21-10 road record and have won five of their last six road games. While this game is a slim one-point spread, the Grizzlies do come in as underdogs, which is a title they’ve been able to handle this season. In their last fifteen games, Memphis is 12-3 ATS as an underdog and 10-3 ATS in their last thirteen as road underdogs. Despite their positive trend as underdogs, to cover in this game would mean to pull off the outright win. After seeing their inability to fix their defense over the break, I see the Chicago offense being too much for the Grizzlies defense once again.

The Bulls come in with a 24-8 home record as they round out their six-game homestand with the Grizzlies tonight. During this homestand, the Bulls offense has been electric, averaging 119.4 PPG over that stretch. Also, electric has been Chicago’s ability to cover the spread. In their last six home games, the Bulls are 5-1 ATS, and in a larger sample size are 21-7 ATS in their last twenty-eight home games as a favorite. While a one-point favor doesn’t have the odds leaning their way very much, they do have a reason to give the Bulls the edge because of their consistent play in the last handful of games. Also worth mentioning is that the Bulls are the slower-paced team this season compared to the Grizzlies. This slower pace will be crucial in the final quarter if they have a lead and can control the ball to minimize Memphis’ opportunities to go on a run.

Saturday night will be the second time the Grizzlies and Bulls face this season. The first matchup just a month ago ended in favor of the Grizzlies in a 119-106 final. Dating back to last season, Memphis has won three straight against the Bulls.

How the Public is Betting the Grizzlies vs. Bulls

73% are betting the Bulls against the spread.

This cross-conference matchup features two of the league’s top offenses this season. The Grizzlies have found their groove on offense this month but continue their defensive struggles when facing a team that shoots well from range. The Bulls, despite being the lesser defense this season, have done enough to win games as they come in winners of six straight games. As the total suggests in this game, a high-scoring affair is expected, which has me rolling with the more consistent team in recent games from top to bottom. Take the Chicago Bulls to cover the spread. Note: We’ve expanded our number of NBA game previews and picks each day! We used to post 1-2 a day but are now posting 5-6! Check out our free NBA picks main page!