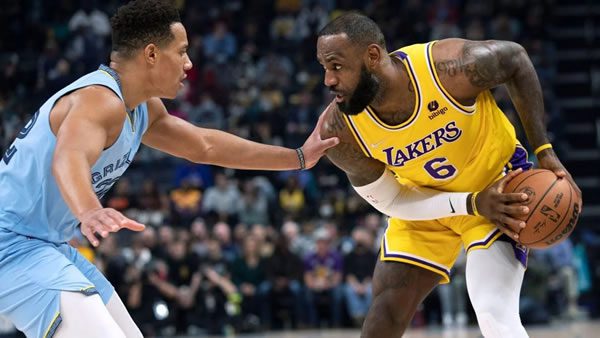 The Memphis Grizzlies head into their matchup against the Lakers with a 27-14 record and sit 4th in the Western Conference. After a slow start and missing their best scorer, Ja Morant, the Grizzlies have crawled to the top of the Western Conference. Coming in with an eight-win streak, which is second-best in the league, the Grizzlies have leaned heavily on their offense to get the job done. Last night against the Clippers, the team dropped 123 points, despite just a 44% shooting night from the field. Sunday night is the last stop of their short two-game road trip before hosting the Warriors and Bulls in two of their next four games. The Grizzlies are led by Ja Morant, who is averaging 25.0 PPG this season. As a team, Memphis has the 6th best scoring offense at 111.7 PPG. Defensively, they sit right in the middle with the 15th spot, giving up 107.6 PPG.

The Los Angeles Lakers head into this matchup against the Grizzlies with a 21-19 record and sit 6th in the Western Conference. Putting their rough month of December behind them, the Lakers are on a four-game win streak and have won five of their last six games. LeBron continues to not miss a beat with yet another impressive performance in their win over the Hawks, dropping 32 points and 134 as a team. In that win, the Lakers also built off their previous low turnover game with just eight total turnovers. The Lakers are led by Lebron, who is scoring 28.7 PPG this season. Los Angeles moved up yet another spot in the scoring department to the 5th best scoring offense at 111.8 PPG. The Lakers defense continues to be exposed as the 26th best scoring defense, allowing 112.2 PPG.

A Lack of Defense

The Western Conference is notoriously known for its slugfest offenses and lack of defense. This matchup is nothing short of that mark with two defenses who sit outside the top 10 of the league. Though the Grizzlies hold the 15th spot, well ahead of the Lakers, who are 26th, there is a strong similarity within their teams. That similarity is that each team has an offensive stud that can score like no other but fails to live up to the expectations on the other side of the court. You guessed it, that’s Ja Morant and LeBron James. This season, Morant has a 110.5 defensive rating, putting the Grizzlies in the bottom five with him on the court. Without him, their rating is 102.4, which coincidentally puts them in the top five defensively. Not saying that the Grizzlies are better without Morant, but they basically need him to consistently drop 30 points to make up for his lack of defense. As for LeBron James, in his career, we’ve all seen the clutch blocks and highlights defensively, but with age, he has taken more of a backseat in the defensive department and let his scoring do the talking. Taking into consideration the play between these two alone, high scoring offense in addition to bad defense means value in the total for this game.

Grizzlies on the Road

The Memphis Grizzlies have one of the best road records in the NBA this season at 13-6. Again, with a healthy Ja Morant back in the lineup, they have been able to outduel some of the NBA’s best teams like the Nets and Suns. The odds have been even better for bettors, with a 14-5 record ATS. Even at times with the odds against them, the Grizzlies have delivered, going 11-1 ATS in their last 12 road games and 8-1 ATS in their last nine as a road underdog. With the line against them once again and playing back-to-back nights, the Grizzlies will have to dethrone a hot Lakers team who hasn’t dropped a home game since Christmas day against the Nets. With a short margin of 2.5 points to cover, the Grizzlies would essentially have to secure the outright win by making a game-winning shot or stopping LeBron from clutching a game-winner, and I don’t see any of these scenarios being the case.

Having not lost a home game in over two weeks, the Lakers are starting to give the Crypto.com Center crowd some hope once again. Despite struggling at home against the spread this season, going 9-15, the Lakers continue their upward trend, going 5-1 in their last six games. Their defense overall has been better as well, apart from giving up 118 points in their last outing. So long as their offense can keep their fast pace and continue to outlast teams, who knows how far this streak could last. With that stellar offense averaging 125.8 PPG over their last four games, I think the Lakers will continue their streak by outlasting the Grizzlies in a high-scoring showdown.

Sunday night will already be the fourth time these teams meet this season. The first matchup was won by the Lakers, though the Grizzlies have answered by taking the last two. Dating back to last season, though, the Lakers have often got the last laugh, winning four of the last six contests.

How the Public is Betting the Grizzlies vs. Lakers

This Sunday night matchup features two teams who have become very familiar in now their fourth meeting. The Grizzlies come in riding an eight-game win streak behind the stellar play of Ja Morant. In similar fashion, the Lakers have found success with LeBron playing center, going 5-0 when he does. This game has the makings of a high-scoring duel which could come down to who gets more possessions in the final minute. With the lack of defense, each team has displayed this season and their offenses shooting the lights out, take the OVER on the 224.5 total. Given the game management of LeBron and him consistently taking over games when it matters, I’m backing the King in this one. Take the Los Angeles Lakers to cover the 2.5-point spread.