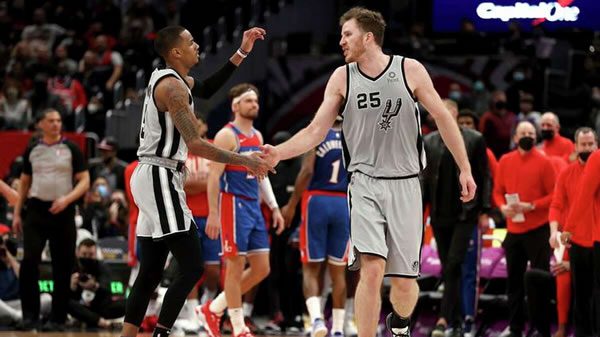 The San Antonio Spurs host the Minnesota Timberwolves in a Non-Conference matchup. Tip-off is set for 08:30 PM ET at the AT&T Center.

The Minnesota Timberwolves come into this game with an overall record of 39-30, placing them 7th in the Western Conference. Throughout the season, Minnesota has struggled in their 35 road contests, sitting at 17-18. Over their last five games, the Timberwolves have played well, picking up 4 wins. During this stretch, Minnesota is averaging 123.0 points per game, 8.0 points more than their season average of 114.6. This uptick in offensive play has come while playing a group of opponents who are collectively giving up 111.0 points per contest. Minnesota comes into this game also playing well defensively, holding their opponents to just 105.0 points per game. An improvement on their season average of 111.6.In the Minnesota Timberwolves’ most recent game, Minnesota took down Miami by a score of 113-104

The San Antonio Spurs come into this game with an overall record of 26-42, placing them 12nd in the Western Conference. Throughout the season, San Antonio has struggled in their 34 home contests, sitting at 13-21. Over the Spurs’ last five games, they have picked up just 2 wins. In this stretch, San Antonio’s offense is scoring right in line with their season average, putting up 110.0 points per game. Combined, the Spurs’ last five opponents are giving up 111.0 points per contest. In this recent cold stretch, the Spurs are allowing an average of 115.0 points per game, similar to their usual rate of 112.9.In the San Antonio Spurs’ most recent game, the team fell to Indiana by a score of 119-108.

Heading into this matchup, the Minnesota Timberwolves are the more efficient team on both ends of the court. This scenario has taken place in 18 of Minnesota’s 33 games, leading to a winning percentage of 67%. So far, the San Antonio Spurs have played 45 games as the inferior offensive and defensive unit. In these instances, they have lost 45 times, by an average margin of -12.0 points.

Heading into today’s matchup, the Minnesota Timberwolves and San Antonio Spurs have met up for 1 game. Minnesota took game one by a score of 115-90.

How the Public is Betting the Timberwolves vs Spurs

67% are betting the Wolves against the spread.
52% are wagering on the game to go over the posted total of No Odds

If the San Antonio Spurs hope to work their way back into the conversation for the NBA play-in tournament, they need to be much more consistent. After knocking off the Utah Jazz, the team dropped a much-needed game to Indiana. On the other side, Minnesota has a 37-30-2 record vs the spread, including going 19-16 on the road. However, I expect the Spurs to up a strong fight in tonight’s matchup, covering the spread as 5.5 point underdogs.