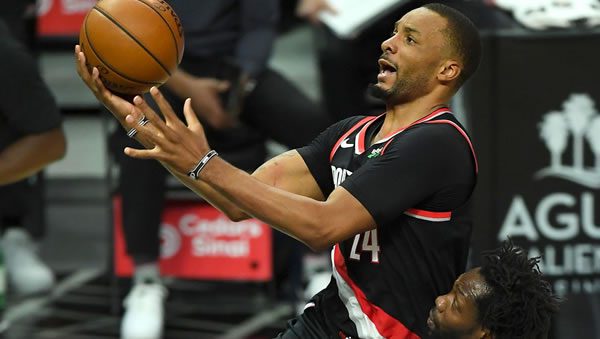 The Portland Trail Blazers find themselves on a three-game skid, having yet to win a game this month. After starting the season as one of the top-scoring teams in the league, the Trail Blazers have averaged only 96.6 PPG over their last three games. Their scoring woes may continue for at least another few games as Lillard is out with an abdominal injury and just lost McCollum for a stretch with a rib injury and collapsed lung. Lillard leads the team in scoring with 21.4 PPG, and McCollum is close behind at 20.6 PPG. The Portland offense averages 108.7 PPG, and their defense continues to struggle, giving up 111.3 PPG. The team’s recent downfall has led them to a -2.6-point differential.

The Golden State Warriors head into Wednesday 20-4, tied with the Suns for the best record in the NBA. Last time on the floor, the Warriors were able to bounce back after an “anomaly” type loss at home to the Spurs. In that game, Andrew Wiggins broke out in a big way from deep, knocking down eight of his ten three-pointers. Steph Curry leads the squad with 27.7 PPG. As a team, Golden State has the third-best scoring offense at 113.6 PPG and has the best defensive scoring team, giving up just 100.6 PPG. The Warriors 13.0-point differential is also best in the NBA.

Pace of play in this game is going to be in sole control of the Warriors. Golden State averages 103.1 possessions a game, which puts them just inside the top 10. With Steph Curry, who has a green light from any range, the Warriors will often shoot early in the shot clock if Curry can get any separation from his defender. Portland isn’t far behind at 101.0 possessions a game but has played above their average the past few games and will have to play to the Warriors’ tempo Wednesday night as well. With Portland missing their top 2 scorers in Lillard and McCollum, I see them struggling to keep up with the Warriors offense. If Portland wants to have any chance to keep it close, it may be smart for them to slow it down when they have the ball in this game to keep it away from the Warriors offense as much as possible.

The Trail Blazers started the season 9-1 at home through their first ten games, becoming an offensive juggernaut to visiting teams at Moda Center. Unfortunately, Portland seems to be unable to bring their scoring on the road as they have a 1-10 road record this season. The Trail Blazers average just over 111 points per game at home but fall to 104.8 PPG on the road. The Portland offense may see one of their worst offensive outputs against the Warriors on Wednesday against the league’s top defense, who allows 100.6 PPG.

A big factor to consider in any game is who the healthier team is. The Trail Blazers have considerably more injuries than the Warriors, all of which the team relies heavily on every night. On top of losing their biggest offensive contributors, the team also may be without Cody Zeller, who, in his first year with the team, has become Nurkic’s breather when needed and has delivered big plays for the Portland defense. Needless to say, the Portland bench is going to carry a lot of the load and have a tall task ahead of them trying to keep this game as close as they can.

Much like Portland, Golden State has been dominant at home, with a league-best 13-2 home record. The Warriors’ defense has made it hard for teams to come into Chase Center and keep up for four quarters, allowing 100.3 PPG at home. On top of the Warriors crowd being one of the loudest in the league, fans of the game travel near and far to watch the greatest shooter to ever step on the floor in Steph Curry. Due to their dominance at home, the Warriors often have a double-digit spread to cover and have given bettors little reason to doubt with an 11-3-1 ATS record at home this season.

Wednesday night’s game will be the second time these teams face this season. Just a few weeks ago, the Trail Blazers visited Golden State in a 118-103 final in favor of the Warriors. Dating back to last season, the Warriors have won two of the last three games.

How the Public is Betting the Trail Blazers vs. Warriors

This Wednesday night matchup features two teams at opposite ends of the Western Conference. With Portland’s struggles when healthy, this game could get ugly early with key players missing on the floor. Most teams with a 13.5-point spread to cover I would be very hesitant to roll with, but with the Warriors winning big at home against good teams this season, the Trail Blazers will be an easier matchup for them. Take the Golden State Warriors to cover the 13.5-point spread.

Looking at the total for this game, I see a lot of value as well. Even though the Warriors have one of the best offenses this season, should they get out to an expected large lead, we may see some bench players log more minutes than usual to keep the starters healthy. In addition, the Warriors defense is the best in the league and will be facing a team without their two best scorers. At a 218.5 total, the Warriors have a chance to hold up their end of the bargain, but the Trail Blazers will not. Take the under on the 218.5 total. Bet your Blazers vs. Warriors prediction and ALL your NBA picks for FREE this week by taking advantage of a 100% REAL CASH bonus on your first deposit of $50 to $300 at MyBookie Sportsbook! (Must use bonus code PREDICT100).