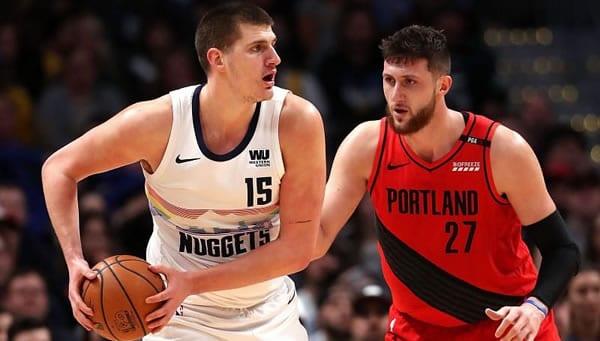 The first round of the NBA playoffs offers up several intriguing match-ups, one of which involves the Nuggets and Trailblazers, who open their best-of-seven series Saturday night in Denver. The Nuggets were the better team by five games during the regular season, but they’ll play this series a bit shorthanded, with three guards ailing and out. That’s probably why the line on this game is so low. Here’s what we’re looking at when handicapping this game, with our free NBA playoff betting pick at the end.

The NBA playoffs betting market opened this game with Denver favored by one point, with an over/under of 227.5. Both those figures were holding steady in the early betting action. Also, the Nuggets may own the home-court advantage for this series, but Portland is lined as a -135 favorite to win it, with Denver getting +115.

Portland played 42-30 this season, good for the No. 6 spot in the Western Conference. The Blazers actually only sat at 32-28 about three weeks ago, then won 10 of their last 12 games. Most recently, Portland beat this Denver team last Sunday 132-116, although it should be pointed out that the game was basically meaningless to the Nuggets, who rested most of their starters after halftime.

Denver, meanwhile, played 47-25 this season, good for the No. 3 spot in the West. The Nuggets sat at 17-15 back in late February, then went on a 26-6 run to position themselves in the top three in the conference. Most recently, as mentioned above, Denver lost a basically meaningless game (to them) to this Blazers outfit last Sunday 132-116. The Nuggets took a hit when G Jamal Murray (21 points per game this season) went down and out with a knee injury back on April 12. And yet Denver is 13-5 SU although 8-10 ATS since then. The Nuggets are also without guards Will Barton (13 ppg) and PJ Dozier. So Denver’s a little thin in the back-court right now. The Nuggets took the season series from Portland this year two games to one, and as mentioned above, the only game they lost didn’t mean anything to them. However, Denver played 0-2 ATS in those two victories, winning 111-106 at -6 and 106-105 at -1.5. Both those Nuggets wins were close; the first one was a three-point game with seven seconds left while the second one came down to a missed shot at the buzzer. And the largest lead either team held in either game was 12 points.

The Blazers actually out-shot Denver from the field in those games, 46 percent to 44 percent. But the Nuggets set a new NBA record in that first meeting by committing just one turnover, then out-rebounded Portland 46-41 in the second meeting.

The first two meetings between these two teams this season – the only two that really mattered to both teams - played close, and this one should, too. But Portland comes in hot, 10-2 over its last 12 games, while Denver is dealing with a depleted backcomb. Sure, Jokic will probably throw in 40 for the Nuggets, but the Blazers have Lillard and McCollum and might even get some help from former Nugget Carmelo Anthony, who would love to make a playoff run at this late stage in his career. So we like Portland here for our free NBA playoff pick for Saturday.