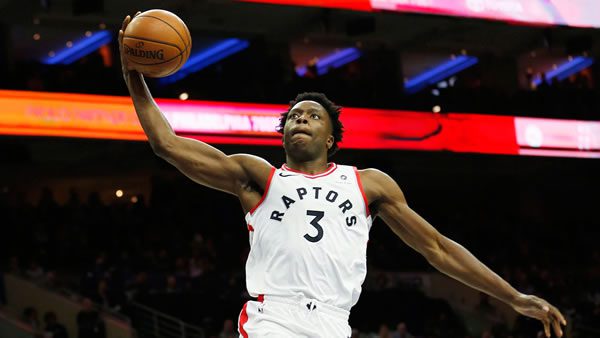 The Philadelphia 76ers host the Toronto Raptors in an Eastern-Conference matchup. Tip-off is set for 07:00 PM ET at the Wells Fargo Center.

The Toronto Raptors come into this game with an overall record of 48-34, placing them 5th in the Eastern Conference. So far, Toronto is above .500 on the road, holding a record of 24-19. Over the Raptors’ last five games, they have picked up just 1 win. In this stretch, Toronto’s offense is scoring right in line with their season average, putting up 103.0 points per game. Combined, the Raptors’ last five opponents are giving up 107.0 points per contest. A key reason for Toronto’s recent struggles is a defensive unit giving up 111.0 points over their previous five contests. This figure is up from their season average of 107.3. In the Toronto Raptors’ most recent game, Toronto took down Philadelphia by a score of 110-102

The Philadelphia 76ers come into this game with an overall record of 51-31, placing them 2nd in the Eastern Conference. So far, Philadelphia is above .500 at home, holding a record of 26-17. The 76ers have played well over their last five games, picking up 4 wins. In this stretch, Philadelphia’s offense is scoring right in line with their season average, putting up 113.0 points per game. Combined, the 76ers’ last five opponents are giving up 108.0 points per contest. The 76ers have been picking up victories while holding opponents to an average of 105.0 points per game, similar to their season average of 107.2. In the Philadelphia 76ers’ most recent game, the team fell to Toronto by a score of 110-102.

As Toronto travels to take on the Philadelphia 76ers, the Raptors’ leading scorer is Pascal Siakam. Through 69 games, Siakam is averaging 22 points. On the season, he has surpassed his season average in 51.0% of his games. Against the 76ers, Siakam will need to be on top of his game as Philadelphia is allowing their opponent’s top scorer to surpass their average in 43.0% of their games, placing them in the top 10. On the other side, Joel Embiid leads the 76ers in scoring, averaging 30 points across his 71 games. Throughout the season, Embiid has outscored his season average in 52.0% of his outings. On the season, the Raptors have allowed their opponent’s top scorer to surpass their season average in 50.0% of their games, giving them a rank of 17th among NBA defenses.

The 76ers come into this game as the more efficient offensive team, averaging 110.4 points per 100 possessions. When playing as the superior offensive unit, Philadelphia is winning at a rate of 69%. These wins are coming by an average margin of 11.0 points. On the other side, the Raptors hold the advantage on the defensive end of the floor. So far, they have played 28 games as the better defensive team, picking up 18 wins.

Heading into today’s matchup, the Toronto Raptors and Philadelphia 76ers have met up for 8 games. In their last meeting, Toronto picked up a 110-102 win.

The Philadelphia 76ers come into this matchup with an opportunity to close out the series on their home floor. After dominating the free-throw battle throughout the series, Philadelphia attempted just 25 free-throws compared to 35 for Toronto. This advantage helped the Raptors overcome a strong outside shooting performance from the Sixers. The big news heading into game 5, is how Joel Embiid will perform with a torn ligament in his thumb. Despite the injury, Embiid plans to play through the injury. In terms of betting, Philadelphia enters as the 7.5-point favorites. I am anticipating the Sixers to close things out, but I see the Raptors putting up a strong fight. I recommend taking Toronto ATS. Bet your NBA playoffs picks for FREE by taking advantage of a 100% REAL CASH bonus up to $500 when you use bonus code PREDICTEM at Betnow Sportsbook!