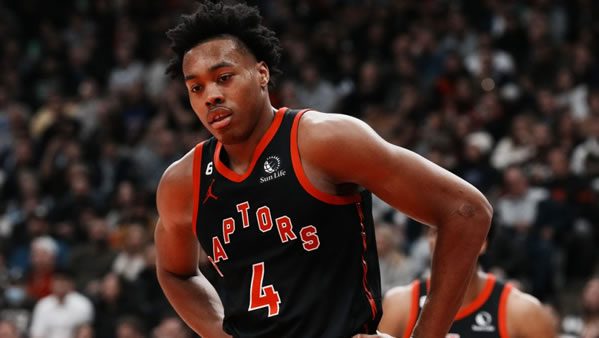 In their last outing, Toronto was unable to come away with a win against the Bucks, losing by a score of 130-122. Fred VanVleet led the team with 39 points, but it was not enough to overcome their status as 1-point underdogs. The Raptors also ended up with an ATS loss in the game.

Heading into the game, Minnesota is 22-24 overall. When playing at home, Minnesota has a mark of 14-10 and a win percentage of 58%. Currently, the team is 10th in the Western Conference. So far, they are 20-26-0 vs. the spread. The Timberwolves need a win in today’s matchup vs. Toronto to avoid their 3rd straight loss.

In their most recent matchup, the Nuggets defeated Minnesota with a score of 122-118. Jaden McDaniels scored the most points for the team with 18, but it was not enough to earn the win. The Timberwolves were 9 points ahead going into the game.

This season, Toronto is averaging just 112.2 points per game, which places them 23rd in the league. A major reason for these low numbers is the fact that they play at one of the slower paces in the NBA at just 97.4 possessions per game. Toronto’s 3-point shooting numbers are below the league average, as they have hit just 32.9% of their looks from deep. On average, the team gets up 32.8 3-point shots per game, placing them 19th in the NBA. Defensively, the Raptors have been one of the best units in the NBA, allowing just 107.1 points per game. So far, they have allowed a 3-point shooting percentage of 35.34%, placing them 17th in the NBA.

Going into today’s game, Pascal Siakam is the leading scorer for the Toronto team with an average of 25.5 points per game. This season, his field goal percentage is 47.7%. The team’s second top scorer is OG Anunoby, who is averaging 17.6 points per game.

This season, Minnesota is among the league leaders in scoring, averaging 115.1 points per game. So far, the Timberwolves are also one of the more up-tempo teams in the league, sitting at 100.7 possessions per game. When looking at the team’s 3-point shooting numbers, they profile as an average team in both percentage and attempts. For the season, the Timberwolves’ offense is ranked 20th in 3-point attempts per game while connecting at a rate of 34.9%. Minnesota’s defense has been a weak area, as they currently allow 113.3 points per game. However, even with their overall struggles, the team has done a good job defending the 3-point line. So far, opposing teams have hit just 34.89% of their looks from deep.

More Picks: Get our Philadelphia at Portland betting analysis and pick for 1/19/23 >>>

The Timberwolves should have tired legs (and lungs) after playing at elevation last night in Denver. This is one of the toughest spots of the NBA season to play in the Mile High City and then have a back-to-back against a good Raptors team! I’m laying the points with the Raps! Bet your NBA picks for FREE this week by snagging a 50% real cash bonus at the web’s best sportsbook, which has the BEST live wagering platform on the web! It’s where we wager! —> Bovada Sportsbook!