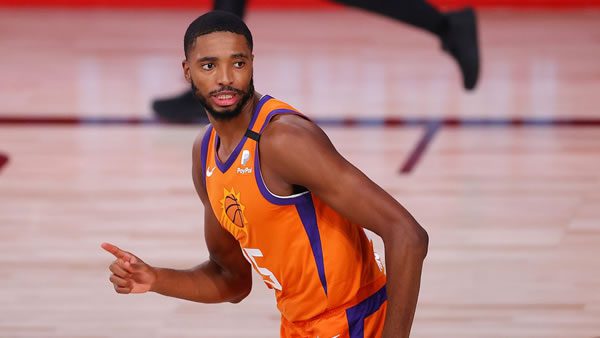 So far, the Suns have put together an overall record of 1-1, while going 0-2-0 vs the spread.
The Suns are coming off a disappointing 113-111 loss to the Trail Blazers. Going into the game,
they were favored to win by 5 points. Phoenix let an opportunity for a win slip away as they held
a lead going into the 2nd half of action. Leading the team in scoring was Devin Booker, as he
contributed 33 points while hitting 47.8% of his shots.

So far, the Clippers have put together an overall record of 2-0, while going 1-0-1 vs the
spread. The Clippers are looking to add another win to their resume, as they took down the Kings
by a score of 111-109. This win gave them an ATS push, as the team was 2 point favorites.
Although Los Angeles trailed the Kings going into halftime, by the end of the 3rd quarter they
had taken the lead. Leading the team in scoring was Paul George, as he contributed 40 points
while hitting 51.6% of his shots.

Although the two teams ended their head-to-head season series with a split, the Clippers took
care of business at home, going 2-0 on their home court. Last year, the Suns saw a drop in
overall scoring when playing the Clippers, averaging 103.25 points per game. Like the Suns, the
Clippers scored at a rate below their season average, finishing with 102.25 points per game vs
Phoenix. The Suns have had the better record vs the spread over the last 5 games, going 3-2. The
team’s average scoring margin in these contests sits at 6 points per game. Over the course of
these games, the two teams averaged 210 points per game, leading a 1-4 over-under record.

Through 2 games, the Suns are averaging 109.0 points per contest, placing them 24th in the
NBA. When looking at the team’s pace of play, the Suns are currently below the league average in
possessions per game. Right now, the Suns’ offense is in search of answers, as not only do they
tend to play at a slow pace but they are just 21st in effective field goal percentage.

Leading scorer Devin Booker will need to be on top of his game vs the Clippers, as they were
on the NBA’s top teams at limiting the scoring of opposing shooting guards.

The Clippers come into today’s game as the 29th ranked scoring offense at 107.0 points per
game. So far, the Clippers are ranked 23rd in possessions per game, which places them below the
NBA average. Although the team tends to play at a more deliberate pace, they are currently one of
the more efficient shooting teams, connecting on field goal attempts at a rate of 48.4%.

Leading scorer Paul George will need to be on top of his game vs the Suns, as they were on the
NBA’s top teams at limiting the scoring of opposing small-forwards.

The Suns have looked amazing so far. They lost to Portland Friday, but the Blazers played an
almost perfect game. The Clippers are going to be a frontrunner this season, but their chemistry
isn’t solid yet. I like the Suns to win straight up!