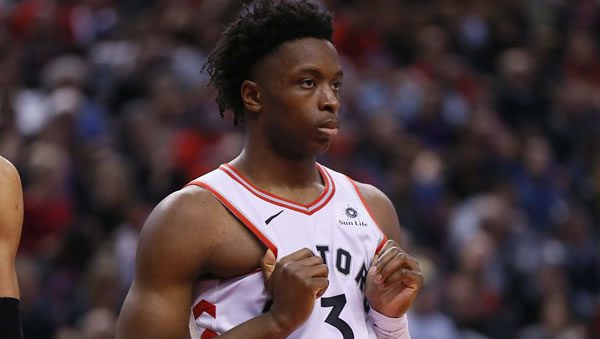 The Toronto Raptors come out of the All-Star break with a 32-25 record and sit 7th in the Eastern Conference. Toronto kicks off a three-game road trip tonight as they look to finish off a strong month of basketball. Much as they have relied on their defense this season, they will need to contain one of the league’s top offenses in the Hornets. An area of the Toronto defense that has been great this season is their ability to defend the paint. The Raptors allow 44.4 points in the paint per game, which is the 7th best mark in the league. Looking at the Charlotte offense, they too are a strong team in the paint. The Hornets average 50.0 points in the paint per game, which is 4th best in the NBA. After going cold from range as of late, the Hornets have relied on getting points near the basket, so controlling the paint in this game has even more emphasis. The Toronto offense is led by Pascal Siakam, who is averaging 21.9 PPG. As a scoring offense, the Raptors currently sit 18th as they average 108.7 PPG. Defensively, they round out the top 10 as they give up 106.9 PPG.

Get $60 Picks Credit
The Charlotte Hornets come into this game with a 29-31 record and sit 9th in the Eastern Conference. The Hornets had the All-Star break come at a good time as they look to regroup after going 1-8 in their first nine games of the month. With their lack of defense, Charlotte has relied on their high-powered offense to keep them alive in the East. Given the Eastern Conference is more of a defensive conference than the West, their recent offensive slump has made the Hornets look like an early playoff exit team, should they make it in the end. Though it has been a low point of their offense in recent games, Charlotte may look to the three-ball in this game as the Raptors are in the bottom half of the league at defending it. The Hornets average 13.7 made threes per game, which is 5th best in the league, while the Raptors allow 12.4 threes a game, which is 16th in the NBA. Given Toronto’s success at defending near the basket, this should only give the Hornets more of a reason to stick to shooting from the perimeter in this game. Should they go cold from range once again, this game could get out of hand with Toronto controlling the ball and pace. The Charlotte offense is led by LaMelo Ball and Miles Bridges, who average an even 20.0 PPG this season. The Hornets’ offense remains 2nd in the NBA as they average 113.8 PPG. Their defense, however, needs work as they sit 28th, allowing 114.7 PPG.

Raptors on the Road

The Toronto Raptors head into Charlotte with a 16-12 road record and have some impressive road statistics and trends that make them a feared defense to face at home. For bettors, Toronto has been a good bet as of late, going 6-1 ATS in their last seven road games and 5-1 ATS in their last six as a road favorite. Statistically, there are two I see making an impact in this game. One is that the Raptors are the number one team at creating turnovers this season as they force 16.3 turnovers per game on the road. Ironically enough, ball control has been a weakness for the Hornets as of late as they gave up 16.3 turnovers in their last three games. The other stat worth mentioning is their second-half defense, which is 1st in the league as they give up 49.2 PPG on the road. Should the Raptors force the Hornets to start slow, they will be able to turn it up a notch in the second half to cease full control of this game.

The Charlotte Hornets come in with an even 14-14 home record and have given bettors a reason to roll with the visiting team as of late. The Hornets are 1-9-1 ATS in their last 11 home games and have just two home wins since January 10th. Also, when playing as a home underdog, the Hornets haven’t done well. They are 0-4-1 ATS in their last five games as a home underdog and 0-5-1 ATS against teams with a winning road record. My biggest concern for the Hornets in this game is a slow start, which has been their case in recent games. The Hornets already sit outside the top 10 in first-quarter points this season, but in their last three games, they’ve been shut down with just 23.0 first-quarter points, which is third-worst over that stretch. With just a 2.5-point spread in this game, the Hornets will need to keep this game within a few possessions to have a chance to cover in the end, but I see the Toronto defense keeping the distraught Charlotte offense at bay and building an early lead.

Friday night will be the third time the Raptors and Hornets meet this season. The Raptors took the first matchup at home, as well as their most recent game earlier this month in Charlotte. Toronto also comes in winners of four of the last five matchups.

How the Public is Betting the Raptors vs. Hornets

72% are betting the Raptors against the spread.

This Eastern Conference matchup features one of the league’s best offenses taking on one of the best defenses. The Raptors have had a great month to this point and should come into this game with a well-rested defense looking to slow the pace and control this game. Despite the Hornets having an overall great scoring season, they’ve hit a slump over the last month due to poor three-point shooting and a lack of ball control, leading to turnovers. Given the possibility of a rusty start from the All-Star break, the better defensive team will have the edge to start as both offenses find their footing. Take the Toronto Raptors to cover the 2.5-point spread. Note: When you bet on games, are you laying -110 odds? Of course you are! 99% of sports bettors do! Did you know that you could be cutting your vig in half and laying only -105? Yes! This option exists and will save you a ton of cash over the years! Thousands! And it doesn’t cost you anything but 5 minutes to make the switch to BetAnySports! 10+ years on our site with ZERO complaints from readers! Click here to sign up today or if youre confused, check out our article on how to bet at reduced odds! You’ll be so happy you did!