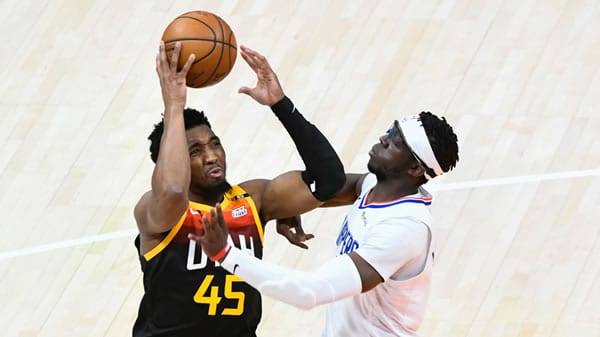 After holding serve through the first two games of this best-of-seven Western Conference semifinals affair at home, the Jazz shoot for the 3-0 series lead Saturday night in Los Angeles. Utah went off on this series as a -135 favorite to win it, with the Clippers getting +115 as the underdogs. Now, with the Jazz up 2-0, they’re lined at -395 to win it, with LA getting +295 to come back. Here’s our homework for this Game 3, along with our NBA spread pick.

The NBA playoffs betting market opened the Clippers at -4 for this Game 3 with an over/under of right around 223.5. Early betting action then bumped LA to -4.5 and dipped that total to 223.

For those looking to eschew the point spread and just pick the winner outright, the best Game 3 money line we could find on the Clippers was the +170 offered at BetNow, while Jazz could be had getting -190 at Bovada

Utah took the first two games of this series at home by scores of 112-109 Tuesday night and 117-111 Thursday night. The Jazz also covered the spread both those games as favorites of 2.5 points.

Also, Game 1 of this series played under a total of 222 by one point, while Game 2 played over a total of 223.5 by 4.5 points. Utah led Los Angeles 66-53 at the half Thursday night and 76-55 midway through the third quarter before the Clippers used a 46-23 rally to take a 101-99 lead with six minutes to go. But the Jazz recovered their rhythm and used a 14-2 run to re-take control on their way to the victory and the cash.

Utah shot 55 percent from the floor Thursday night and hit 20/39 from three-point land.

Los Angeles shot 47 percent from the floor but only hit 11/30 from long range.

The Clippers actually led Game 1 by 13 points at the half, but the Jazz came from behind for the win.

With Thursday’s win/cover, the Jazz are 6-1 both SU and ATS this playoff season.

With Thursday’s loss, the Clippers are 4-5 both SU and ATS this postseason.

LA also lost the first two games of its first-round series to Dallas, and at home to boot, then won four of the next five games to take the series in seven.

The Jazz finished five games ahead of the Clippers in the regular-season standings, 52-20 to 47-25, and took the season series from Los Angeles two games to one. But both Kawhi Leonard and Paul George missed one of those losses for the Clippers.

So, on the whole, Utah is 4-1 both SU and ATS against Los Angeles this season.

On the injury front, Utah G Mike Conley (16 points, six assists per game this season) has missed the first two games of this series with a sore hammy, but the Jazz won both games anyway. He’s listed as questionable again for this Game 3. Meanwhile, Clippers F Serge Ibaka (11 points, seven rebounds PG this season) is out with a bad back.

We expect this series to go at least six games, which would lead us to believe Los Angeles will win this game. But that doesn’t mean the Clippers are the bet here. Four of the five meetings between these teams this season have been decided by six points or less, and we can see this one coming down to the last minute, too. And Utah is playing so well since Donovan Mitchell came back. So we’ll take the Jazz and the points here for our free NBA playoff pick for Saturday.