49ers at Jags Week 11 Pick Versus the Spread 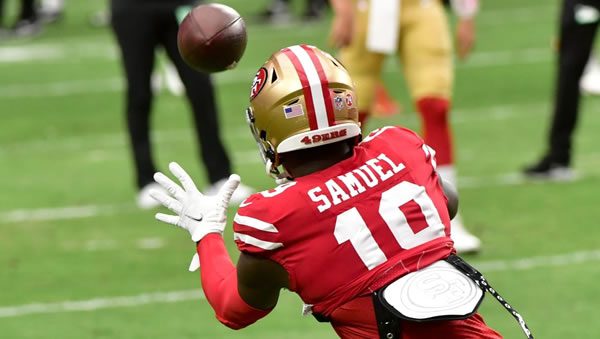 Point Spread: SF -6.5/JAC +6.5 (SportsBetting.ag - Awesome live betting platform and signup bonuses! There’s a reason they have some of the best player retention of all online sportsbooks!)

The San Francisco 49ers come into TIAA Bank Stadium to take on the Jacksonville Jaguars on Sunday. Jacksonville came up short to the Colts on Sunday, 23-17. The loss dropped them to 2-7. Still, after winning two of three, they overcame a 17-0 deficit to narrow it to 20-17 in the fourth quarter, eventually falling just short. They now host a San Francisco team that really dialed it in on MNF with a 31-10 win over the Los Angeles Rams. With a chance to get to .500 this week, what can we expect from the Niners in what seems like a manageable spot? Let’s break it down!

Looking at Jacksonville a Different Way

The Jaguars are definitely a problematic team. And if not for a blocked punt returned for a touchdown, they might have beaten the Colts last week. With youth comes mistakes, and the Jaguars have had more than their share this season. Still, we see a team generally being competitive, beating Buffalo, beating Miami, and hanging in there against a Colts team that had gotten a bit hot. They withstood the lively arm of Carson Wentz and a big game from Jonathan Taylor to hold the Colts to 16 points of total output. And against an offense like that, a TD and three FGs isn’t so shabby.

One would have to figure that at some point, the experience will start paying off for Jaguars’ QB Trevor Lawrence. He is extremely strapped in what he can do with a compromised pass-catching corps and a line that doesn’t really afford him ample time to survey the field. They were able to get a nice tight end in Dan Arnold, but Marvin Jones and Laviska Shenault are pretty dicey as their featured receivers, often going long stretches without doing much at all. Getting RB James Robinson back last week and seeing him get in the end zone was a good development for a Jaguars’ offense that can use all the production they can get.

Still, you can see the Jaguars subtly turning the corner. They’re not the laughingstock team that lost 20 in a row. We’re seeing closer results and a defense that isn’t getting run over, despite remaining pretty dicey against the pass. In a game like this, against a San Francisco offense that has found success running and throwing elusive at times, this is a home spot for a defense where we could see the Jags perform decently. Hanging in there with this offense isn’t easy, as Lawrence doesn’t yet have the things around him needed to succeed. But maybe they’re on their way.

Matchup Issues for the Jaguars

The San Fran defensive line losing some juice over the course of the season could offer more upside for James Robinson and the Jags’ running game. An aerially-struggling Jaguars team, however, will need to find answers for the San Francisco passing defense, which has been pretty tough for the most part this season. And even if the front is depreciated, guys like Nick Bosa can still wreak havoc on a Jacksonville front.

The San Francisco run-game has taken a lot of hits, but they have a large cast of running backs. With George Kittle and Deebo Samuel doing aerial damage, it also presents challenges to the Jacksonville defense. The Jacksonville pass-defense has stood out as a vulnerable group for much of the season, but after keeping a lid on Josh Allen and Carson Wentz, maybe they’re starting to turn the corner in that department too. With a good run-defense, that could go a long way toward finally giving the Jaguars something that they’re good at.

Which Niners Team to Expect

Just their last four weeks show how all over the place the 49ers have been this season. There was a 12-point loss to Indy at home, an 11-point road win over Chicago, a 14-point loss to the Cardinals, and then their 31-10 win over the Rams last week. Trying to get a read on this team has been difficult in recent weeks. At their best, they can run the ball, with Jimmy Garoppolo connecting well with Deebo Samuel and George Kittle. They can get after the quarterback with a secondary that can keep a lid on the opposing aerial game.

Obviously, at 4-5, the flip side of that equation has surfaced more than their best-case scenario. And as of late, the difference has been stark, with the Niners covering the spread by a mile or sometimes missing out by a lot too. We’ve seen a feast-or-famine nature to this team so far in 2021. But maybe we can start to see some better results with better health. They’re still battered by the injury bug, with key guys missing from all phases of their team. But they’re also getting healthier in some key positions, with Kittle and Samuel back at near top-health. Sleeping on the 49ers moving forward could be a miscalculation.

This is a move that could backfire. If Jacksonville’s recent defensive surge is real, we could tune in on Sunday and see San Fran back to grinding away with little success. It’s a bit of a funky road spot for a Niners team coming off two divisional games. There’s no real connection with the Jaguars. But I see last week maybe putting some wind in the 49ers’ sails. The season isn’t lost yet, and the prospects of getting back to .500 might give them a little push this week. I see the Niners taking care of business on Sunday. I’ll take San Francisco.

Loot’s Prediction to Cover the Point Spread: I’m betting on the San Francisco 40ers minus 6.5 points. Bet your 49ers vs. Jaguars pick and ALL your week 11 NFL predictions for FREE by taking advantage of a 100% REAL CASH bonus on your first deposit of $100 to $300 at MyBookie Sportsbook! (Must use bonus code PREDICT100 in order to qualify for the special bonus). Click here to sign up now!