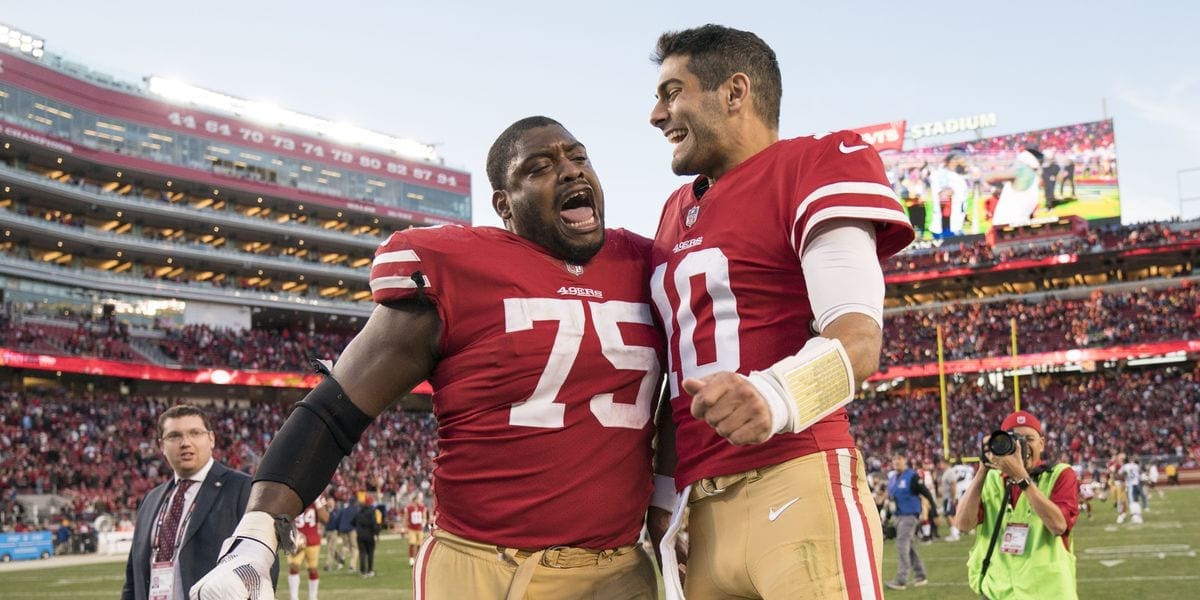 The 49ers came into 2017 trying to get their storied franchise back on track, after 2016 saw the team fall off the rails and win only 2 games. Chip Kelly was brought in to work his magic with the ‘16 team that was in partial transition, but Kelly had no tricks up his sleeve as the team ranked close to the bottom in all offensive categories and dead last in defensive points and yards allowed. A full rebuild was initiated with John Lynch being tapped to be the new General Manager and Kyle Shanahan hired from the Atlanta Falcons to lead the team. Sportsbooks set the ’17 over/under win total for the team at 5 and Under looked like a sure winner as SF started 0-9. However, it turned out Over bettors had the right side as SF won their final 5 games to finish 6-10. The spark for the late season surge was QB Jimmy Garoppolo who was acquired from New England at the trade deadline and started those 5 games.

Riding the winning streak into 2018, the 49ers have high expectations for the new year. Garoppolo has a full off season to study the intricacies of Shanahan’s offense and Lynch had an additional off season to shape the roster. Division foes Seattle and Arizona are taking steps back making the future look bright in the Bay. Most betting sites are smitten with Jimmy G and have set the over/under at 8.5 wins. The future is definitely bright for SF, but Under is still the play in 2018. Here is the breakdown.

Garoppolo and Shanahan are a potent combo. Shanahan is considered one of the best offensive minds in the game for making game plans and calling plays. He directed the Falcons offense on their 2016 Super Bowl run and was the prize head coach hire of 2017. Garoppolo sat out for about a month before taking the reins of the 49ers but when he took over, he 100% looked the part. He completed 67% of his passes and averaged right at 300 yards per game. With his 5 wins last year, Jimmy G enters 2018 with a lifetime 7-0 NFL record. There will be some new skill players for Garoppolo to distribute the ball to. Jerick McKinnon replaces Carlos Hyde as the lead back. McKinnon fits Shanahan’s model RB with his ability to work in the passing game. He caught 51 balls for the Vikings last year for 421 yards. Hyde is a better pure runner but Shanahan never warmed up to him as he prefers dual threat backs and will look to deploy McKinnon as he did his RBs with the Falcons.

The offensive line should be somewhat improved with the addition of free-agent center Austin Richburg and first round pick Mike McGlinchy who looks to slot in at right tackle. This offense should continue building on the momentum created down the stretch last year.

The 2017 team was more competitive than the record suggests. Brian Hoyer opened the season behind center for Niners. Hoyer was never mistaken for Joe Montana, but he is a competent NFL quarterback. He started the first 6 games which were all losses, a 20 point defeat to the Panthers to open the year, then 5 losses by a total of 13 points. After Hoyer was injured in week 6, C.J. Bethard took over and started the next 5 contests. Bethard proved not to be a competent NFL QB and the Niners lost 4 of those games by a combined 74 points (but did sprinkle in a win against the hapless Giants). Garoppolo then took over to win the next 5 games, winning by a combined 35 points. So, in the games SF had a competent NFL quarterback, they were 5-6 with 5 of the losses (and 2 wins) by less than one score. The Titans and Jaguars came to the Bay for week 15 and 16 contests playing to secure playoff berths or a division title, and the 49ers took care of business in both cases. With a few better bounces or better injury luck, the ’17 Niners could have ended with a couple more wins.

Reasons to Go Under

The Defense didn’t get better. In 2017 the Niners were 25th in points allowed and 24th in yards allowed despite playing a fairly easy schedule including the Bears, Giants, post Watson Texans and Cardinals. They recorded only 30 sacks and 10 interceptions, both also bottom 10 in the league. 33 year old Elvis Dumervil was the only player to get to the QB more than 3 times and he will not be back with the club. Jeremiah Attaochu was signed in free agency to fill this void but Attaochu has totaled 10 sacks during his 3 years with the Chargers. Cassius Marsh was acquired midway through last season to help the pass rush, but he has a resume that shows 6 sacks over 4 seasons.

Eric Reid was the centerpiece of the defensive secondary and one of the team’s best defensive players, but he is currently unsigned. Richard Sherman was the headline addition for the defense. Sherman leaves the division rival Seahawks to play in the Bay but he is recovering from a torn right Achilles in week 9 last year and also surgery on his left Achilles. Sherman is the wrong guy to bet against, but this is a challenging comeback for a position that requires maximum explosiveness. The lack of pass rush and a weak secondary mean the 49ers will have to win shoot-outs on a regular basis.

The schedule will challenge San Fran. The NFC West draws the NFC North and AFC West this season. These 8 teams boast 6 offenses that can throw the ball all around the yard and score a lot of points exploiting SF’s defensive weaknesses. The Bears and Broncos have also improved and these games will be competitive. In the division, the Rams are legitimate Super Bowl contenders while Seattle and Arizona are rebuilding but division games are always toss ups. The Giants and Tampa Bay round out the schedule and both will bring improved offenses to face the Niners. These are games the 49ers would expect to win but are not locks.

Why Under Is The Play

There is no doubt the offense will move the ball, but can they put up enough points to win shootouts? In Garoppolo’s first 4 starts, he only threw for 3 touchdowns and the offense only scored 8 TDs in those games. Garrett Celek was the only receiver last season to score more than 2 passing TDs and none of the receivers on the roster are red zone threats. Marquise Goodwin and Pierre Garcon are the primary receivers. Goodwin was a very pleasant surprise last year hauling in 56 passes and averaging 17.2 yards per catch. Garcon missed the final 8 games of the season with a neck injury, so he will be a new weapon for Garoppolo. 2nd round draft choice Dante Pettis out of Washington will compete with Aldrick Robinson for snaps as the third receiver but it is a stretch to think they will add a lot to the passing attack. This is not a top shelf receiving corps.

Defenses will be better prepared for the 49ers attack. With 5 games of Jimmy G running Shanahan’s offense on tape, defenses will be able to game plan better. Shanahan can make adjustments and add new wrinkles but opposing D Coordinators will make the Niners play their best game each week. The overall talent of the offensive skill players may put a ceiling on the offense despite Shanahan’s ability to scheme up plays. The only way the team gets over 9 wins is on the backs of the offense as the defense is not yet stout enough to win games when the offense doesn’t score in the high 20s.

Brighter times and playoff games may be coming to the San Francisco Bay in the future, but probably not in 2018. 9 wins is too much to ask for a roster that has only won 8 over the past 2 years.