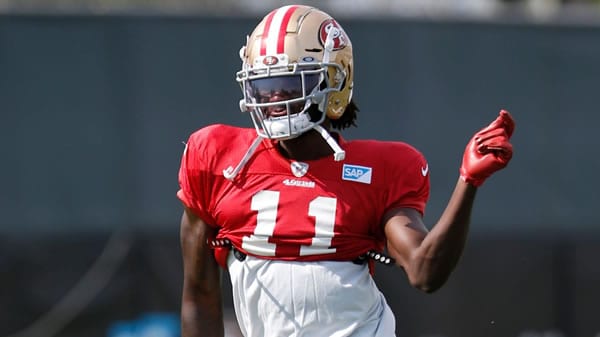 The San Francisco 49ers take on the Seattle Seahawks on Sunday in a big NFC West battle at CenturyLink. Seattle tasted defeat for the first time on Sunday night, coming off the bye and losing to the Cardinals in a thriller, 37-34. They now turn their attention to another division team in the 49ers, who have fought hard to get back to 4-3, winning their last two, including a 33-6 road-win against the Pats on Sunday. A win here would really signal that they’re back on the right track. Who can cover the spread this Sunday?

Where are the 49ers?

The defending NFC champs have seen an eventful, topsy-turvy first seven games of the season. Between the injuries and the dramatic switches in form, the 49ers have been a hard team to read. A home loss to the Cardinals wins over the Jets and Bills led to a 43-17 home-beating to the Dolphins. Between that result and the never-ending cascade of costly injuries, morale was as low as it had been in a while. But Garoppolo was able to shake it off, playing well the last few games, as the Niners beat the Rams and Patriots. To go from where they were a few weeks ago to beating a good Rams team and smash New England on their field has been eye-opening.

However, this is a critical do-or-die period for the Niners, and after some home games stacked at the front of the schedule, they’re smack-dab in a run of 4 road spots in five games, with this being the second. The injuries have almost been unconscionable in their volume and how many key players are now out. And it got worse on Sunday. On top of all the other guys who are out, they get a big game from RB Jeff Wilson, and he’s now out, with Deebo Samuel back to being inactive after returning for a few games. Champion’s heart or not, you need the horses. Hats off to San Fran for being 4-3 with all this going on, but you wonder if they’re going to combust.

Still, San Fran will need to make it work with what they have. Garoppolo has been playing better and seems healthier. George Kittle, rookie receiver Brandon Aiyuk, and rookie JyMycal Hasty will need to step up, with so many guys missing. The O-line has been playing better, and there are still horses on defense, even with all the injuries. A bulk of their power is missing, but the “next man up” philosophy carries some weight with a team not immune to injuries over the last several seasons, as they have some proven depth on the defensive side of the ball.

Catching Seattle at the Wrong Time

Catching this version of Seattle, at home following a bitter loss, might not be an example of great timing. San Fran is in the midst of what might be a draining sequence of road-spots, coming into CenturyLink to face a Seahawks team that will be more irritated than they otherwise would be if they went ahead and beat Arizona last week. While the Niners’ improvement over the last two weeks is very commendable, this represents a task that could be a little out of their wheelhouse, especially as their offense got handed some more bad news following last week.

Can the San Fran Defense Hang?

Giving up 20 combined points in their last two games has the 49ers’ defense looking pretty sharp the last two weeks, a sharp contrast of what we had started to see several weeks ago when Philly and Miami ran over them on their own field. Guys are missing from all levels, and with names like Bosa, Solomon Thomas, Richard Sherman, Dee Ford, and others, a lot of their menace on this side of the ball is gone. On Sunday, Kwon Alexander and Jaquiski Tartt also went down, leaving them even thinner if they can’t go.

Going against a Seattle home offense that is irritated and looking to turn it loose would appear to be a very tough matchup for a San Fran “D” that has the heart, but not the manpower to make it work. Seattle is tops in the league in total yards and average points per game, as Russell Wilson gets better and better. He can still peel off big plays with his legs while taking to the air now with the best of them. Tyler Lockett was gigantic on Sunday, and different guys can step up in this offense and get it done. This offense always delivers, having scored between 27 and 38 points in all their games so far. Though they are far more-aerial than before, we’ll see how injuries to running backs will resonate as they move forward.

Whether or not the 49ers have the ability to take advantage is a big question, but going against the Seattle secondary, the last-ranked pass defense in the league offers its own scope of possibilities. On Sunday, the game against Arizona reminded us that it might be tough for Seattle to put away some of the better offensive teams they play with that defense. Torn apart in the running back corps, maybe San Fran can utilize a still-decent pass-attack to good effect in this game. Without an ample pass-rush to dissuade him, maybe Garoppolo can make it work.

To be honest, this spread being so low is less of an item of comfort and more leaves you wondering why the book seemingly wants you to bet Seattle. And I don’t question that this means a lot for the 49ers, and a win here would pump a lot of wind in their sails. So I expect some urgency from them and some of that wherewithal that helped them win this conference last season. I just can’t help but think certain hard realities will come crashing home in this game. I see a pumped-up Seattle squad getting the win and cover on Sunday.

Loot’s Prediction to Cover the Point Spread: I’m betting on the Seattle Seahawks minus 3 points. Bet your Niners/Seahawks pick for FREE by taking advantage of a 50% real cash bonus up to $250! This sportsbook has also been around for 20 years, has the best live betting platform on the web AND offers FAST, hassle-free payouts —-> Bovada Sportsbook.