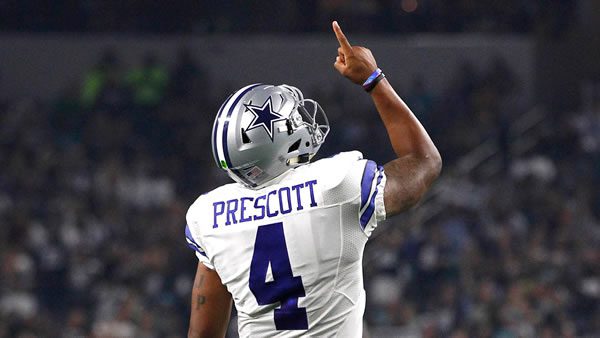 One week after beating the Minnesota Vikings on the road with a backup quarterback and earning the nation’s trust that America’s Team is among the best in the NFL, the Cowboys laid a complete egg in their Week 9 match-up against the Denver Broncos in a 30-16 loss. The final score actually looks more respectable than the game actually was, considering the Cowboys rallied to score 16 points in garbage time after trailing 30-0 in the 4th quarter. Everything that had been going well for Dallas through the first seven games of the season took a complete turn, and perhaps the jury is still out for America’s Team.

In last week’s home loss, the Cowboys surrendered just shy of 200 yards on the ground to the Denver rushing attack. More importantly, the Cowboys high-scoring offense was shut down on the heels of QB Dak Prescott’s worst performance in his career. Prescott hit just 19 of 39 passes for 232 yards with two touchdowns and one pick. Trust me when I say that stat line does not tell the story. There were several missed opportunities down the field and the Cowboys just never had an answer on the offensive side of the ball. Of course, week to week performance differs greatly in the NFL, and Dallas will try to put last week’s disaster behind them when they host the Atlanta Falcons as 9 point favorites inside AT&T Stadium.

The Atlanta Falcons moved back to the .500 mark last week with a 27-25 victory over the New Orleans Saints. The Falcons defense stood strong against a New Orleans’ offense that is still trying to figure out their quarterback situation in the wake of Jameis Winston’s season-ending ACL injury. The Falcons gave up two touchdowns on the final two possessions, but WR Cordarrelle Patterson stepped up in a big way to catch six balls for 126 yards, including a 64-yard bomb to set up the game-winning field goal.

Despite the loss of WR Calvin Ridley, Atlanta remains dedicated to the passing attack behind QB Matt Ryan and that provides an intriguing match-up on Sunday against a “bend but don’t break” Cowboys pass defense that is giving up 270 yards per game through the air. Despite the yards given up by the secondary, the Cowboys rank 2nd in the NFL in interceptions (11) which has really helped their efforts during the 1st half of the season. However, I believe the bigger concern for Dallas is what if they stop producing the turnovers? Statistically, they continue to give up a lot of yards, and that led to an explosive effort by a stagnant Denver offense just one week ago.

For Dallas, the formula is simple as they must play better offensively. In handicapping, it’s never a reliable strategy to look at past game performances. So if we strike away the disaster last week against Denver, this match-up on Sunday against a struggling Falcons defense is about as good as it gets. RB Ezekiel Elliott is battling a knee injury but is expected to play. Even if Elliott is unexpectedly held out, this is an eruption spot for the Cowboys rushing attack with Elliott and/or Tony Pollard. Historically, QB Dak Prescott has performed exceptionally when the ground game is successful, especially off the play-action. Therefore, I like the Cowboys to have a much better effort this week on offense in one of the best match-ups of the season.

Jay’s Pick: I am doubling down on the Cowboys this week. The match-up is perfect, and I think there will be extra effort/motivation following last Sunday’s disaster. Take Dallas -9. Bet this game and ALL your Week 10 NFL picks FREE by taking advantage of a 100% REAL CASH bonus on your first deposit of $100 to $300 at MyBookie Sportsbook! (Must use bonus code PREDICT100 on registration page).