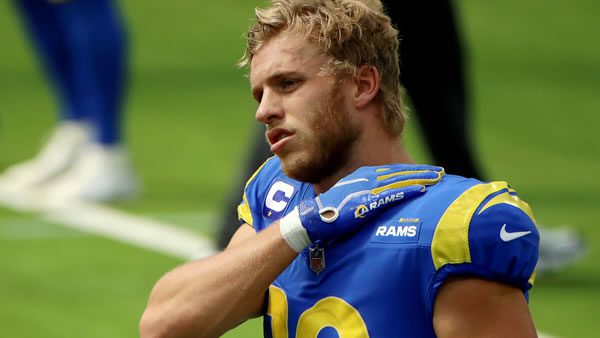 Point Spread: ATL +10.5/LAR -10.5 (Bovada - This is where we bet! Why? 50% bonus, rebates on ALL your bets; win or lose! Best live betting platform! TONS of wagering options for each game and they pay FAST; especially with Bitcoin!)

The Atlanta Falcons come to SoFi Stadium on Sunday for an NFC showdown with the Los Angeles Rams. Neither team had an enjoyable week one with painful losses to start their seasons. In the season-opener on Thursday Night Football, the defending Super Bowl champion Rams sponged an ugly 31-10 loss to the Bills where not a lot went right at all. For the Falcons, an upset win over the visiting Saints seemed all but assured with a 26-10 lead in the 4th quarter before the wheels came off with the Saints storming back with the proverbial last-second FG to win, 27-26. Can the Falcons dust themselves off for this difficult road spot, or will the Rams bounce back?

Big Week for the Rams

There are points in a season where a team like the Falcons could perhaps expect a home Rams team to be sleeping on them a bit. With a really rough loss in the season opener on Thursday Night Football, the Rams might be more pumped than they’d otherwise be, along with getting some more time to ruminate on it. Not that the component of urgency is the only guiding light. We may, in fact, be seeing a Super Bowl hangover play out, though that’s something that wouldn’t be proven by one loss, especially to the leading Super Bowl favorite heading into the season in the Bills. But they didn’t really seem ready to hit the ground running, did they?

The Rams will not be seeing many of the same things they saw last week—a surging aerial game, along with a “D” that is strong across all areas with a significant playmaking element. This is a spot where both sides of the ball can get untracked for the Rams against an Atlanta team that, while not being without certain strong points, is not the kind of team that should threaten an irritated Rams team looking to atone. While keeping in mind that last week’s failings came in a different context, there are some things we want to keep an eye on with the Rams.

Possible Issues for the Defending Champs

It’s easy for any team to fall prey defensively to the Bills, a theme we will see play out all season throughout the league. Despite the Bills getting loose, especially aerially, the Rams still flexed their considerable big-play ability, putting pressure on Allen and registering a few picks. Of more significant concern is the other side of the ball. We’ll see if Matthew Stafford’s elbow becomes a problem and compromises his level of play, as three picks last week could suggest. There seems to be an identity problem in the backfield with Darrell Henderson and Cam Akers, as they need one to establish momentum. It’s going to be key because the aerial game as it stands isn’t that great beyond the bankable presence of Cooper Kupp. Some guys will eventually file back into the rotation, and some newer pieces who flopped in week one like Allen Robinson could come around, but it looks to be a far cry from what we saw last season in their Super Bowl run.

Early Returns on the Falcons

With Marcus Mariota behind center and longtime starter Matt Ryan gone, the new-look Falcons offense will take some getting used to. Mariota wasn’t bad. He showed some lively legs, even if he wasn’t terribly electric with his arm, other than making an early promising connection with rookie Drake London. They got a big game from RB Cordarrelle Patterson and with Mariota’s legs, that’s a promising development on offense. But it remains to be seen if Mariota has enough passing ability to bring the best out of London and a really good young tight end in Kyle Pitts. Suffice to say, the Rams’ secondary, which did not look good in week one, will be in for an easier game this Sunday against what might be a limited Atlanta aerial attack.

One major question for the Falcons, and especially for this game, is their defense. They have standouts, and that’s a start, with pass-rushing threat Grady Jarrett already off to a fast start, along with AJ Terrell being one of the best young corners in the game. They will have soft spots elsewhere, but at least they’re facing a Rams team that is a little dicey other than at the top. Maybe Terrell can quell Kupp, and the rest of the unit can hang in there with what is suddenly a less-than-exceptional supporting cast for the Rams’ offense. But despite what was a good game for the most part for this Atlanta unit, it’s troubling when your sails are filled with the wind of a new season, and you can’t hold a 16-point lead when you’re into the fourth quarter. That type of collapse doesn’t bode well for when you’re playing the Rams or just trying to cover spreads in general, although Atlanta did, in fact, cover the spread on Sunday.

Some things seem to be lining up favorably for the Rams this week, including the matchup of this particular opponent, the location, the long week, and in a weird way—the fact that they came up short in week one. And not only did they come up short, they were embarrassed. It seems overly simple, but I do expect a greater level of effort this week than you’d typically see for this level of opponent. The Falcons might not be as bad as some think, but at home in their division is a little different than a long road trip against the defending champs—an irritated group looking to take it out on the Falcons. I suspect they’ll do just that and win and cover at home on Sunday.

Loot’s Prediction to Cover the Point Spread: I’m betting on the Los Angeles Rams minus 10.5 points. Question: When you bet on NFL games, are you laying -110 or more? Do you realize how much money you would be saving if you were able to bet on games at -105? TONS! Dump your overpriced bookie TODAY and start saving big money by betting at reduced juice!