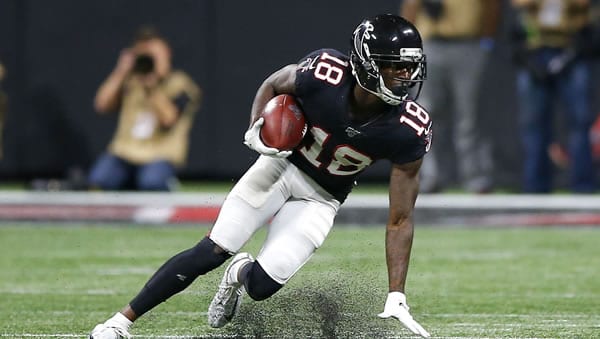 The Buccaneers own a three-game winning streak, the Falcons a four-game losing skid, heading into the regular-season finale for these NFC South rivals Sunday afternoon in Florida. Tampa Bay is also heading into the NFL playoffs for the first time in over a decade, while Atlanta is playing the last game of a very lost season. And yet, the spread on this game is less than a touchdown, and few bettors will be surprised if this game plays close. Who do we like here for our free NFL pick?

Week 17 NFL betting odds opened the Bucs at -7 over the Falcons, with an over/under of 50. Early betting action then dipped Tampa Bay to -6.

The Falcons tote a four-game losing streak into Sunday, although each of those four losses came by five points or less. Last week Atlanta gave the defending Super Bowl champion Chiefs all they could handle but lost 17-14 when a potential game-tying field goal in the final moments veered right.

The Falcons drew first blood on Kansas City with a 98-yard touchdown drive in the second quarter and led 14-10 with four minutes to go. But Atlanta then allowed the Chiefs to drive 75 yards to a touchdown, then missed that field goal.

However, the Falcons covered easily as 11-point underdogs.

Atlanta has now been out-gained and out-rushed each of its last four games, but the margins have been closes, as have the games themselves.

At 4-11 overall, Atlanta is headed for the golf course after this game, but in this spot, against this opponent, we consider the Falcons very live dogs.

Tampa Bay, meanwhile, owns a three-game winning streak, after drubbing Detroit last Saturday 47-7. The Bucs drove five of their first six possessions of the game to touchdowns, led 34-0 at the half, then scored the first seven points out of the locker, and breezed home from there for the easy cover as 12-point favorites.

In fact, the Lions’ only touchdown came on a punt return.

Tampa out-gained Detroit by a whopping 588-186. However, prior to last week, the Buccaneers had been out-gained in three of their previous four games.

Two weeks ago, Tampa trailed these Falcons 17-0 at the half but rallied to win 31-27. Three weeks ago, the Bucs took advantage of numerous Minnesota mistakes to win 26-14.

At 10-5 overall, Tampa Bay is already in the playoffs. With a win, Sunday the Buccaneers clinch the No. 5 spot in the NFC, which would entail a wild-card game next week at the NFC East champion, whichever sub-.500 outfit that turns out to be. But a loss Sunday would send Tampa to either Green Bay, New Orleans, or Seattle next week. So the Bucs actually have something to play for here.

The Falcons are 6-2 SU, 5-3 ATS over the last eight meetings with the Buccaneers. However, most of those games did not involve Tom Brady. In the only meeting involving Brady, two weeks ago, Tampa rallied from a 17-0 halftime deficit to win 31-27 but couldn’t cover as a six-point favorite.

Under are 9-6 in Falcons games this season, which are averaging 49 total points.

Overs are 8-7 in Buccaneers games this season, which are averaging 52 points.

Overs are 8-1 over the last nine meetings between these teams.

Tampa Bay would like to win this game for the better playoff seeding, but we have no doubt Atlanta would love to spoil those plans. And these teams just played a close game a couple of weeks ago. In fact, the Falcons are playing close games all season. We believe this game will be close, too, so we’ll take Atlanta and the points. Question: When you bet on games, there’s a 99.9% chance that you’re laying -110 odds. Did you know that you could be laying only -105 elsewhere? Start saving BIG money by making the switch to -105 today at BetAnySports! Betting pricing, better Bookie!