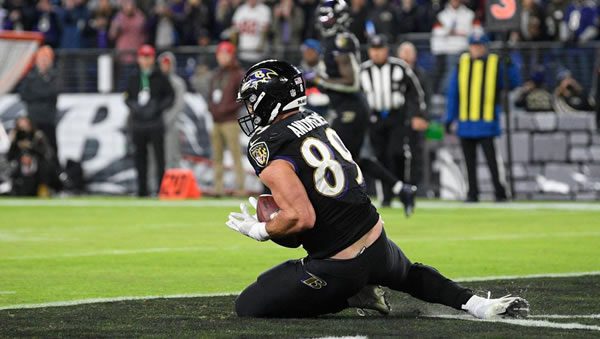 The Baltimore Ravens come to Foxborough on Sunday for a big AFC showdown with the New England Patriots. These 1-1 teams are coming off eventful week two games. New England was able to bounce back from an inept-looking loss to Miami in week one to beat the Steelers on the road, 17-14, on Sunday. Not that a win over a bad Steelers team changes things, but it has at least quieted New England naysayers for a week. Baltimore had a rougher week two, squandering a masterful performance from Lamar Jackson and allowing the Dolphins to come back for the win in a shootout, 42-38. Who can nose above .500 this week in Foxborough?

On Sunday, we started to see what has made New England keep it together in the wake of Brady leaving—clutch play and a certain resourcefulness that Bill Belichick is able to foster with a team that really doesn’t look good on paper. But they’re also not in a position to take full advantage of the Ravens’ issues this week. The Ravens are still the Ravens on the offensive side of the ball. However, a slew of early-season injuries has rendered their defense a pretty bad group all of a sudden, with the secondary being totally demolished. With time, guys can file back into the rotation, and dinged-up players can get healthier, but whereas the Dolphins were able to unleash vast aerial fireworks, the Patriots might not be in that good of a spot. Not with Mac Jones leading the brigade and a receiver package of Jakobi Meyers, Nelson Agholor, and Kendall Bourne. Granted, it’s not like Tua Tagovailoa had a track record of massive passing performances, but having top receiver talent at least made it something that was in the cards potentially. I’m not sure I see that here from the Pats.

On the positive side of the equation for New England, you have a resourceful and masterful coaching staff that can still take an opponent’s best weapon and diminish it to a fair degree. Baltimore’s offense has a lot of juice, but it’s all about Lamar, and if you can put a crimp in his style, it goes a long way. They don’t really have a run game right now outside of Jackson, and perhaps the Baltimore offense isn’t as hard to disrupt as some of the more versatile offenses the Patriots will face this season. But make no mistake, if this dissolves into a shootout, it won’t be easy for the Patriots to keep pace. They need a game that’s a bit of a stinker where they hang around and have a chance at the end to steer it into their column. And in favor of their cause, they get this one at home against a Ravens team that left a lot on the field last week.

Over the years, we’ve become accustomed to deferring to Belichick and assuming whatever deficit he faces can be made up with his mastery on the sidelines and ability to get the most of what he has. And that might all be true. I’m just not sure that a win over a shabby Steelers team bolsters that sentiment. It’s one thing to take on a team like that and hem and haw your way to a narrow win, and it’s quite another to do that with a team that can do the things the Ravens can do. So sure, in this road spot for the Ravens, some caution is to be exercised. Chances are it won’t come off as swimmingly as an overconfident Baltimore backer would like to assume, but the Patriots are outgunned offensively and might not be in the best position to take advantage of the weaknesses that seem to exist on the Baltimore defense.

Having seen the Ravens fall to another AFC East opponent last week, the Patriots and their backers might feel emboldened until one realizes that the Dolphins beat this very Pats team by 13 in week one. The path for the Pats to rise in this spot seems narrow. They need a big showing on the defensive side of the ball while hoping their offense can keep pace with what is truly a low-end accumulation of talent on that side of the ball. But if Baltimore starts moving the ball with impunity, it’s hard to picture a scenario where the Pats can really keep pace.

Lay the Small Number on the Road Dog

The Baltimore defense we saw last week might even be easy pickings for this Patriots’ offense, but it’s still hard to picture that much offense coming from New England this week. And while their “D” can handle dysfunctional offenses like the Steelers, this is a different kettle of fish. New England’s defense will be pushed to the limit of its capabilities, and it’s still an area that holds more promise than the other side of the ball. New England could see everything go according to plan and still come out on the wrong side of a 17-13 or 21-17 game. After last week’s collapse, I picture a more on-point Ravens team putting together a good 60 minutes of play against a Pats team that will find it difficult to keep pace. I see Baltimore getting out of town with the win and cover on Sunday.

Loot’s Prediction to Cover the Point Spread: I’m betting on the Baltimore Ravens minus 3 points. Bet your Week 3 NFL predictions for FREE by taking advantage of a 100% real cash bonus up to $500 when you use bonus code PREDICTEM on the special offers page at the oldest and most trusted sportsbook on the web: Everygame!