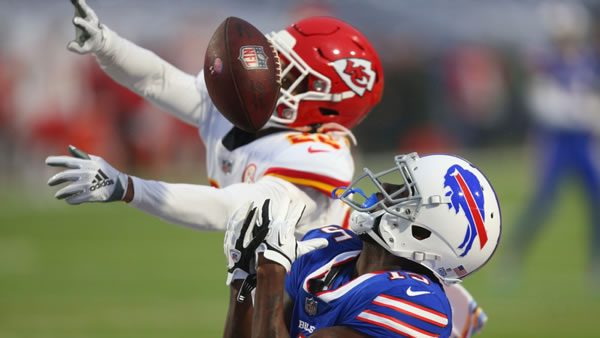 The path to the AFC Championship has traveled through Arrowhead Stadium in each of the last three seasons. Last year, Kansas City stonewalled Buffalo’s Cinderella campaign with a 38-24 victory to send the Chiefs to their 2nd straight Super Bowl. On Sunday, the Buffalo Bills will get their shot at redemption in a rubber match when they travel to Arrowhead Stadium for a showdown with the Kansas City Chiefs in an AFC Divisional match-up. While the AFC Championship crown is not technically on the line this week, most experts would agree that the winner of this Sunday’s showdown between the Bills and Chiefs will inevitably emerge as the favorite in next week’s AFC Championship.

Last week, the Chiefs put an absolute beat down on the Pittsburgh Steelers. If not for a couple of garbage time touchdowns from the retiring Ben Roethlisberger, the outcome would have looked even worse in the 42-21 final score. For Kansas City, QB Patrick Mahomes was stellar, completing 30 of his 39 passing attempts for 404 yards with five touchdowns in the huge performance. It was the type of performance we have expected from Mahomes in previous years but perhaps questioned at points during the 2021 season. Either way, the Chiefs have appeared to erase all early-season concerns with wins in nine of their last ten games while flexing muscle on their muscle frequently on the offensive side of the football.

Perhaps the most intriguing component to Sunday’s match-up against Kansas City outside of the rematch narrative is that the Bills have the firepower to contend with the Chiefs in every way imaginable. QB Josh Allen is coming off an eerie similar five-touchdown performance in Buffalo’s 47-17 dismantling of Bill Belichick’s Patriots last week. Allen completed 21 of his 25 passing attempts with flawless precision, and the offense also received a big boost from RB Devin Singletary, who rushed for 81 yards with two touchdowns. Additionally, the Bills continued to get the support from the NFL’s top-ranked scoring defense that was able to produce three sacks and two interceptions against QB Mac Jones. In many ways, it is the Buffalo defense that provides hope for their match-up against a Chiefs team that has averaged 36.5 points over the last six games. Buffalo’s defense forced four turnovers in the 38-20 victory over the Chiefs back in Week 5, and they will be looking for an encore performance on Sunday.

In the Week 5 match-up, the Chiefs posted one of their worst performances of the season. QB Patrick Mahomes missed numerous throws, made several mistakes, and the Chiefs constantly coughed up the football. Obviously, bettors should not expect a repeat performance this week, considering Kansas City has been playing lights out in recent weeks. However, I would argue that Buffalo’s defense is playing some of their best football of the season as well. The Bills have held opponents to just 17 points per game on the season, which ranks 1st in the NFL, and have played even better during the 2nd half of the season.

Both Kansas City and Buffalo have concerns along the offensive line. While the Chiefs’ early-season struggles are well documented, many forget that Buffalo had similar issues with protecting Allen. Both offenses have elite talent at the skill positions, and if Singletary can continue to offer a threat on the ground for Buffalo, I would argue that both offenses’ firepower is very similar. In my opinion, this game will be decided by the defensive front that can win the battle up front and put pressure on the opposing quarterback. The defenses may not win all the battles hence the 55 point total. However, the defense that emerges with a few sacks and/or turnovers will likely pull this game out. If I had to choose, I would lean with Buffalo as the most realistic defense to make that happen.

Jay’s Pick: This is not a high-confidence play, but I believe the Bills get the job done. I would also go on record to state the “under” is very appealing as well. Take Buffalo +3