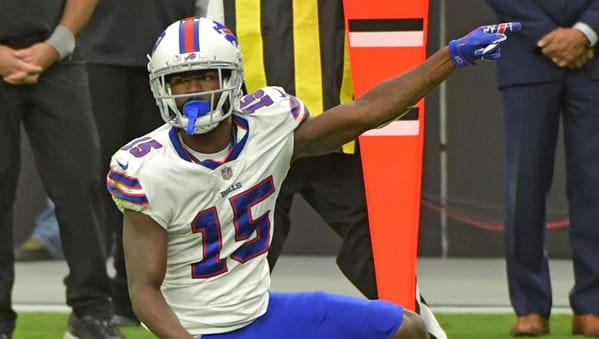 Like the Battle of the Bays, Kansas City against Buffalo features a rematch. Unlike Tampa Bay-Green Bay, the team that’s playing at home in this one won the first meeting, as Kansas City claimed a 26-17 victory in Buffa-lo. There’s also a lot that’s in the air for this game, as nobody knows for sure whether the Chiefs will have ei-ther Patrick Mahomes or Clyde Edwards-Helaire on the field.

As such, these props are still trickling in, and you’ll want to be sure that the right personnel is on the field before you choose to play a prop in this game. But there are a few options on the board, and I’ve taken a look at some of the ones I think make the most sense.

The Bills have added short passes to their arsenal over the past few weeks, and Singletary has caught at least three passes in three of the past five games. However, I’m going for the yards over the receptions here be-cause the juice on receptions is -190. Kansas City likes to be aggressive on defense, and the Chiefs are likely to blitz Josh Allen regularly and try to throw him out of his rhythm.

The way to beat an aggressive defense is to attack it with screens and use its aggressive nature against them. With Zack Moss out of action, Singletary is the main man for the Bills in the backfield, so expect him to play a role in the passing game for most of the night.

This is one of the few bets where you can feel comfortable no matter who the Chiefs start at quarterback because Kelce is as consistent as they come. The tight end has caught exactly eight passes in eight of the Chiefs’ past 12 games, with one other match seeing him catch 10. Whether it’s Patrick Mahomes or Chad Henne at quarterback, Kelce is basically impossible to cover at this point, so either quarterback is likely to target him early and often. Eight catches for Kelce seems like a very safe bet as long as he stays on the field for four full quarters.

Forget what you know about these teams’ offenses for the first 15 minutes. These teams do not start fast, and the Bills are one of the biggest offenders. In each of their past four games, the Bills have seen the game start 3-0 in one way or the other. These teams have also already faced off once and saw Buffalo take a 3-0 lead in the rain in western New York.

To me, this is an excellent bet because everyone thinks points when these teams play (especially the Chiefs), but it usually takes a full quarter for them to get warmed up. Kansas City has averaged 4.3 points per game in the first quarter in its past three contests, while Buffalo is at 3.3. With how well these teams are playing on defense, a field goal coming first is likely the way to go.

Just like the first score being a field goal, a low-scoring first quarter is a good idea with these two teams. Buf-falo has been getting some excellent performances out of its defense lately, and its past seven games have seen the first-quarter result in under 10 points. Kansas City gets a ton of accolades for its offense, but its past five games in which the starters played (the game against the Chargers, which saw the backups on the field from the opening minute, doesn’t count) all resulted in 10 points or less. With another windy, rainy game in the forecast at Arrowhead, this looks like a solid play.

John Brown’s nickname is “Smoke” for a reason: he’s a burner who is likely to find some space in the Chiefs’ secondary. With Stefon Diggs getting all of the attention and Cole Beasley a question mark, the job falls to Brown to step up as the No. 2 receiver, especially with the space likely open in the middle of the field be-cause of Kansas City blitzing.

Buffalo is likely to take a few shots in the middle of the field as long as the line gives Josh Allen enough time to do so, and when that happens, Brown is likely to be the target. If he finds open space in the Chiefs’ sec-ondary, he should be able to get several yards after the catch, making 21.5 a reasonable target.

Chiefs No. 1 Running Back Over for Yards (Not Currently On Board)

This won’t be known until Kansas City either determines Clyde Edwards-Helaire or Darrel Williams the starter, but whoever it is, as long as this number isn’t something crazy, I want the over. First, the Bills have not been good against the run all year. They gave a great performance against the Ravens, but that was also because Lamar Jackson got knocked out of the game, making Baltimore one-dimensional.

Second, Edwards-Helaire lit up the Bills in the first meeting, gashing them for 161 yards. Williams hasn’t been a bell cow this season, but he averaged six yards per carry against the Browns and should be just fine han-dling the workload against Buffalo if the Chiefs need him. Third, Kansas City’s going to be more careful than usual in this game. If Patrick Mahomes plays, the Chiefs are going to want to protect him at all costs because they saw what happened with Chad Henne against Cleveland and know that they need to keep Mahomes in the game.

That means Mahomes won’t be running as often, instead opting to hand the ball off when the situation war-rants a run. If Henne starts, the Chiefs will have no choice but to run. Henne’s run on third down against Cleveland notwithstanding, the Michigan product is not a mobile quarterback and takes the quarterback run out of the equation. That means either Edwards-Helaire or Williams will get those carries, and given the Bills’ struggles against the run, that’s likely to result in an over. For the same reason, I’ll likely play an over for rush-ing attempts for whichever back starts.

Bet the AFC Prop Bets Listed at Bovada (Offers a 50% Bonus and BEST live betting) and BetAnySports (Offers -105 odds on sides and totals!)