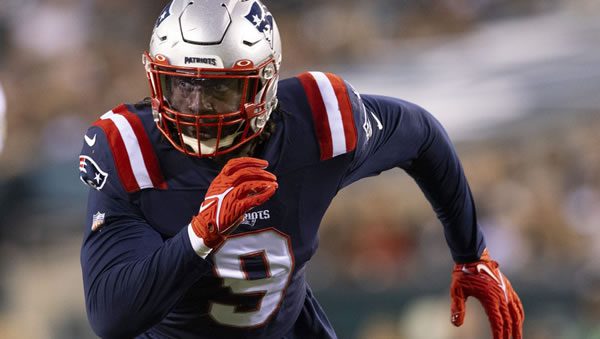 The Buffalo Bills face the New England Patriots on Thursday Night Football in an AFC East battle from Foxborough in week 13 action. Both teams were last seen on the field on Thanksgiving Day. The Bills were able to overcome a stern challenge by the Lions, squeaking out a 28-25 win with some late-game drama and a last-second field goal. The Patriots gave it a good go on turkey day, but fell to the Vikings on the road, 33-26. At 6-5, they’re still in it but need a win this week and this would be a big one. Who can get us the cover on Thursday Night Football?

This is the first go-around this season between these longtime divisional rivals. Still, even as the roles have changed the last few seasons with the Bills rising and the Pats receding, New England has still generally hung in there well against their improved former doormats. Buffalo has been cruising along, winners of 8 of their first 11 games. They were slowed at times this season with injuries, first on defense, and then most recently with Josh Allen’s elbow issue. With more time between that setback and now, maybe it’s time to stop counting on diminished returns from Allen and this Bills’ offense. At the same time, a 2-2 record in their last four and a slew of close games has them looking a little less sharp and powerful than what we were seeing earlier in the season.

Despite coming up short to the Vikes last Thursday, the Patriots were coming off a three-game win streak and have been looking a little better. With 382 yards passing, albeit in a losing effort, at least we saw New England QB Mac Jones able to air it out a little bit. With their two-headed running back rotation of Rhamondre Stevenson and Damien Harris, they can do some damage. Still, against the Bills, some aerial production would be really helpful and as we’ve seen from Jones and his receiver package, that’s not something that surfaces every week. And giving up 33 to the Vikings last week doesn’t bode well when about to take on the Buffalo offense.

Possible Issues for Buffalo on Thursday

This is the third game in a row where the Bills will be away from home. Add to the equation this being a Thursday game, the previous Thanksgiving game, and the hasty exit from a snow-buried Buffalo for a game in Detroit, you can see where maybe this results in a less-than-peak Bills team in this Thursday Night Football spot. They’ve been run a little ragged and I’m not sure that the current relative lull they’re experiencing isn’t tied to some of this. Now they pop up in a Thursday game away from home again and you wonder if this is a spot where one can rightfully forecast a sharp and on-point Buffalo team showing up in Foxborough.

The New England defense has been an anomaly this season, showcasing wide ranges of form. But leading into that difficult Thanksgiving road-spot against the Vikings, they had been doing well, holding their previous three opponents to a combined 23 points. They can bottom out on a given week, but are generally a well-coached and complete unit that isn’t weak in any given area. There is no question that Allen has been off, though he looked better in his last game out. But with the possible bounce-back this week at home for the Patriots’ defense, combined with the depreciation we’ve seen on both sides of the ball from Buffalo in the last month, this game has the looks of being potentially competitive. And that’s hard to grasp for some. You look at their respective rosters, you see the dichotomy at quarterback, the firepower differential, and the star-power on defense, it just screams a dominant win by the Bills. But it’s not that easy.

To see five ball-catchers surpass 60 yards against the Vikings was promising for a Pats team that often times struggles aerially. The Stevenson/Harris combo looks to open up things for a Pats’ aerial attack that is now at its healthiest. While it will be the high-wire Buffalo aerial package that attracts the attention, maybe Mac Jones and guys like Jakobi Meyers, X-factor DeVante Parker, Nelson Agholor, and others can help string together something more substantial moving forward. Doing it against a leaky Vikings’ secondary in a losing effort might not mean much, but if the Pats are going to hang in there with a shot on Thursday, they’re going to need to get more than squeaking what they can out of an earnest ground-game. Even if Belichick dials up the right answers on “D,” they’re still going to need to hit the scoreboard with some regularity.

While this game present a challenge to not outsmart yourself with some contrary take, it’s also a chance to value things that are important in a football game that might not be as shiny as others. The name-power, the offensive fireworks, and the Super Bowl-or-nothing mindset of the Bills is compelling in relation to a New England team that is recognized as being scrappy, but still a work-in-progress. The mind can really run with that story. But with New England playing better overall despite last week and the potential road-weariness and mini-funk the Bills are experiencing, I tend to favor the Pats getting the points. I’ll take New England at home.

Loot’s Prediction to Cover the Point Spread: I’m betting on the New England Patriots plus 5 points. Bet your Week 13 NFL games for FREE by scoring a 100% real cash bonus up to $500 when you use bonus code PREDICTEM at Betnow Sportsbook!