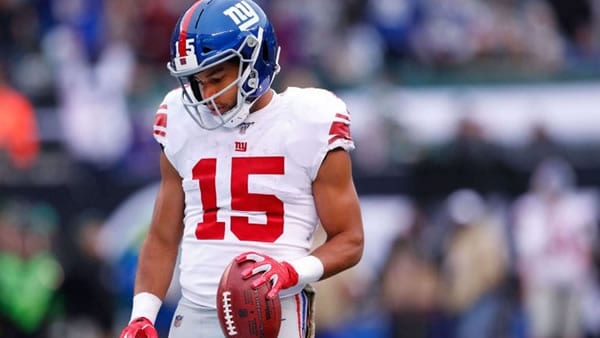 First glance might not show it, but it’s a big game in the NFC playoff picture when the Giants and Cardinals square off Sunday afternoon at the Meadowlands. New York, despite its sub-.500 record, is tied for first place in the NFC East while Arizona is tied for the final NFC wild-card spot. The G-Men are lined as short home dogs here; how are we playing this game with our free NFL pick?

Week 14 NFL betting odds opened Arizona as a three-point favorite over New York, with an over/under of right around 45. Early betting action then dipped the Cardinals to -2.5.

Arizona lugs a three-game losing skid into Sunday after falling at home to the rival Rams last week 38-28. The Cardinals took a 7-0 lead less than two minutes into the game but went cold and trailed 14-7 at the half. Arizona pulled to within 24-21 early in the fourth quarter but then gave up the game’s next 14 points and couldn’t recover, coming up short ATS as home dogs of 2.5 points.

The Cardinals got out-gained by Los Angeles 463-232, lost time of possession by a huge 39:21 split, missed a make-able field goal when the game was still close, and threw a pick-six in the fourth quarter that killed any chance of a comeback.

Arizona has actually out-gained and out-rushed three of its last five opponents but is just 1-4 SU, 0-5 ATS over that span, mainly thanks to some crucial turnovers.

Two games ago, the Cardinals lost to New England 20-17 on a field goal at the buzzer, and three weeks ago, they lost at Seattle 28-21.

At 6-6, overall, Arizona is tied with Minnesota for the third and final NFC wild-card slot. But Arizona
would lose the tie-breaker with the Vikings based on records vs. common opponents.

New York, meanwhile, rides a four-game winning streak into Sunday after upsetting the Seahawks last week in Seattle 17-12. The Giants, with Colt McCoy playing quarterback in place of the injured Daniel Jones, started slowly and trailed the Seahawks 5-0 at the half. But New York scored the first 17 points of the second half and held on from there for the outright victory as an 11-point dog.

The Giants only produced 290 yards of total offense last week but held Seattle to 327. New York also out-rushed the Seahawks 190-111 and won the turnover battle 2-1.

The Giants have now out-gained three of their last five opponents and out-rushed six of their previous seven foes.

At 5-7 overall, New York is tied with Washington for first place in the NFC East and owns the head-to-head tie-breaker over the Team, thanks to a sweep of their season series.

These two teams have played five common opponents so far this season. Arizona is 4-2 both SU and ATS against San Francisco, Washington, Dallas, Seattle, and the Rams, while New York is 3-3 SU, 4-2 ATS vs. those five foes.

These two teams just met back in Week 7 of last season, a 27-21 Cardinals victory also at Met Life Stadium. That game stayed under a total of 49.

As of this writing, New York starting QB Jones was still listed as questionable for this game with that bad hamstring.

Unders are 8-4 in Cardinals games this season, which are averaging 52 total points.

Unders are 9-3 in Giants games this season, which are averaging 41 points.

New York owns a four-game winning streak, including a big upset of Seattle last week. But in our book, that sets the Giants up as candidates for a letdown this week. Meanwhile, Arizona owns a three-game losing skid, but we believe the Cardinals are better than that. If they can just cut out the turnovers, they might be alright. The G-Men are a chic betting pick as of late, but we love betting against chic picks. We’ll give the short spread with Arizona here. Bet your Week 14 NFL picks and ALL your sports bets at -105 every week (instead of the spendy -110 your book is socking you!) at one of the web’s best sportsbooks —> BetAnySports!